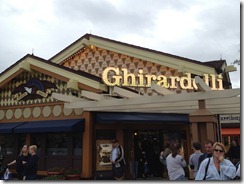 Hungry from some ice cream? Put those dollars that you saved by coming to Downtown Disney (which is free) to good use by treating the whole family to Ghiradelli.

Ghriradelli is on the Marketplace side of Downtown Disney. Very near The World of Disney Store and the many other shopping locations. 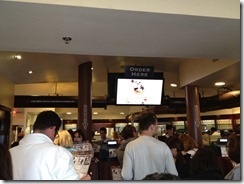 When you come in the front door you’ll get into a long line. I have been to Disney many times, I’ve been to Ghiradelli many times and EVERY TIME I have to wait in an excruciatingly long line. So go ahead and get comfy. 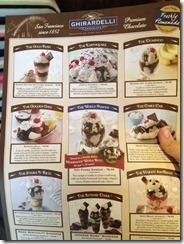 While you wait in line you will be able to grab a menu and decide which type of sundae or ice cream cone you’re interested in. If you enlarge this photo you should be able to see many of them.

In a world where coffee and ice cream have both become insanely expensive Ghriadelli keeps pace by making their name brand ice cream a little pricy. I usually can get out for under 6.00 with tax just by myself, but for a family it could add out.

And here’s a secret. I keep trying and trying and I still haven’t found an ice cream that I think is delicious there! 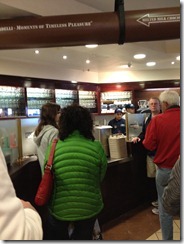 After you order you stand around and wait. I think this is fairly odd too. They make your ice cream behind a tall counter and then call out your number. Sometimes its loud enough to hear and sometimes they have to call you two or three times. (I stress about stuff like this. I don’t know what. I think I don’t want to be “that gal” who they call over again.

It always seems really crowded here too, which just bothers me. I know you’re thinking “you’re at Disney, get use to crowds”, but the way I do Disney I rarely have bad crowds and that’s the truth.

So what’s my feeling about Ghriadelli? Its not as good as my local Cold Stone to me, and doesn’t TOUCH the classic mickey ears ice cream bar or the Dole Whip, but for people really craving ice cream at Downtown Disney it’s a good choice.