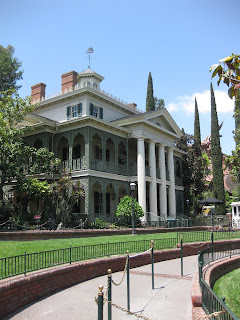 New Orleans Square in Disneyland is one of the most charming sections of the park. It sits along the Rivers of America, has beautiful architecture, jazzy music and wonderful winding rows of stores down charming paths. It also has one of the more popular, and certainly one of my favorite rides- The Haunted Mansion.

The Haunted Mansion is surrounded by wrought iron gates and it is a beautifully designed Bayou mansion, complete with shutters and a weather vane. Upon walking up to the ride, you will realize that this is not just a ride you are about to enter, but it is an experience.

The idea of an attraction being an experience is just what Walt Disney had in mind for The Haunted Mansion before it was built. Walt passed away before work was completed on the mansion, in 1969, but he had a definite influence in the creation of New Orleans Square and The Haunted Mansion Ride. He worked with several WED (Walt Disney Enterprises, the Imagineers of the past) members to create what he wanted to be  a walk- through ghost house. This work began in the mid-1950’s, right about the time the idea to replace the Holidayland section of the park with New Orleans Square. Always the storyteller, Walt envisioned an elaborate story for the attraction. At first, an idea involving the story of Ichabod and Mr. Toad (a Disney movie from 1949) was considered. Another idea thrown around was the idea of using the three ghosts from the Lonesome Ghosts cartoon in the story. Walt liked the idea of having one of the ghosts guide you through the ride. 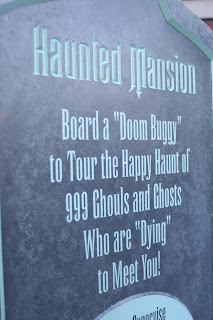 As the plans for the attraction changed, it became clear that the rides at Disneyland were very popular. After Walt’s passing, WED members wanted to keep his desire for a walk-through attraction, while honoring the guests’ desires for more rides. Thus, the omnimover system was created. Guest could board the “doom buggy” and ride through the mansion, while the story of the haunted mansion was being told.

So what is the story of The Haunted Mansion? Well, the mansion belonged to a sea captain from the 19th century. He met an untimely death. Several ghosts, ghouls and goblins retired in the mansion, which is now being run by faithful servants. The ride is wonderfully themed, the story unraveling from beginning to the end. 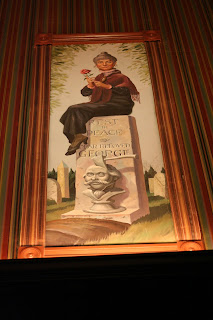 The line for the Haunted Mansion ride tends to not be extremely long (except during holidays), and this is because there is a constant turnover of guests, thanks to the omnimover system. The queue for the ride is not to be missed. Along the path to the front door of the mansion, you will find tombstones. It is worth taking the time to read the names on the tombstones- some are even pets! The wording is creative and sets the tone for the ride itself.

Once inside the mansion, guests enter into a hallway of sorts before being ushered into a large room. The room has an odd shape and there are portraits on the walls. Soon after, the door to the room closes and it become clear that something is amiss. Is the room actually stretching or is it your imagination  The portraits keep getting longer, and longer, revealing some startling things. Suddenly you find yourself looking up at the ceiling  and there is darkness and screams. Will you ever be able to find your way out?

A door to the room opens and you are in a hallway with more portraits. Be sure to take a look at the busts at the end of the hallway. They will be looking at you for sure. 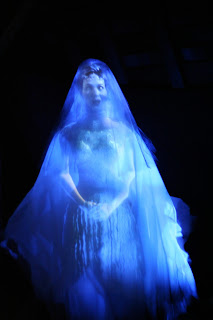 As you find your way to the doom buggies, excitement builds to hear the rest of the story. You will hear about the happy haunts that live in the mansion and will see evidence of them as you move through the ride. There are many rooms in the mansion, and in each room you will find something new- and disturbing! Be on the lookout for a floating candelabra, a barking door, Madame Leota, dueling portraits  a particularly scary attic- and of course- singing ghosts in a graveyard. One of the best thing about the ride is the catchy tune “Grimm Grinning Ghosts” that is sung and played throughout the ride.

The Haunted Mansion ride is a visual treat and a storytelling experience that you will not want to miss on your trip to Disneyland. The scare factor is a 5, simply because of the content of the story and the darkness. I will say that both my four year old and my one year old have no problem whatsoever on this ride. One of the cast members informed me on my last trip, however, that his seven year old niece had a lot of problems with it. So judge accordingly. Guests in wheelchairs and scooters may go directly to the front of the mansion, where a cast member will give you directions. 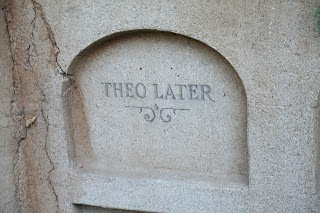 So, as the saying goes,there are 999 happy haunts in The Haunted Mansion, but there is room for 1,000. Any volunteers?