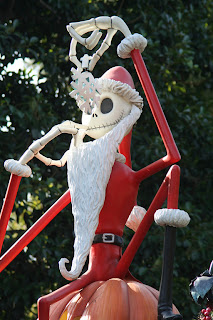 Right around the first of September, there are many disappointed visitors who notice that the Haunted Mansion is closed for a few weeks. There is magic going on behind the walls during this time. The regular ride gets a tremendous “Nightmare Before Christmas” make over. From the outside in this ride undergoes quite the transformation and best of all, this is something that is unique to the parks in the U.S. Ride parts were created for the Haunted Mansion at Walt Disney World, but that park decided against it and the ride parts went to Tokyo Disneyland. 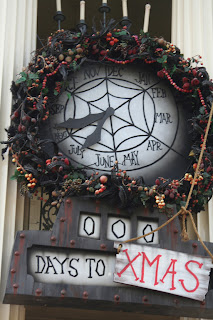 The story behind how Disneyland begun this special experience begins in 2001, when after successful overlay for It’s a Small World and Country Bear Jamboree, the Haunted Mansion received it’s own holiday overlay. It was a bit of challenge for Imagineers to try and figure out what kind of special holiday magic to add to the Haunted Mansion in the beginning. Haunted Mansion is supposed to be a tad bit frightening and, well, Santa Claus is not. The original idea for a Christmas Carol type experience. This could not be worked out. When Imagineers dreamed up a vision of a Nightmare Before Christmas overlay that combined elements from the original ride and genius of Tim Burton’s movie-the combination proved just right.

The idea was not without it’s issues, however. Many of the folks who had participated in the original Haunted Mansion ride had passed on. How would they begin to try to work the catchy music from The Nightmare Before Christmas into the traditional Grimm Grinning Ghosts song? The Imagineers persevered. Kim Irvine, the daughter of the original Leota Toombs, replaced the vision of Madame Leota in the seance room. Pumpkins and other Halloween-Christmas themes were literally laid to cover over specific elements of the ride, while other elements were added to the ride. In 2002, a year after the ride opened, John Debney took the Nightmare Before Christmas music based on the soundtrack from the movie by Danny Elfman and worked it into Gordon Goodwin’s original movie music. Several actors in the film and sound effects from the ride are also from the movie and worked into the original ride. If you listen carefully, you will also hear traditional Christmas carols worked into the soundtrack! 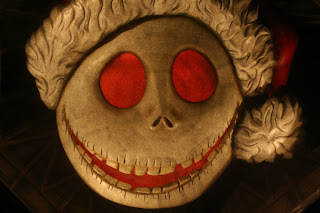 The overlay adds extra charm to the ride. The outside of the mansion is decorated with pumpkin skeletons, black ribbons and countdown clock on the front of the mansion. The ride queue gives you just a hint of what you might experience inside the ride itself.

The ride is meant to take place after the Nightmare Before Christmas movie. The story goes that Jack discovers the haunted mansion and tries to give the happy haunts in the ride a special Halloween-Christmas surprise. The ride then shows how Jack and his friends decorate the mansion. 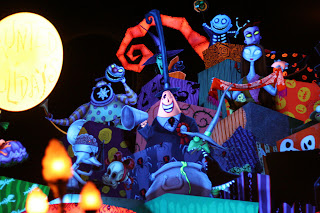 Once inside the famous “elevator” that takes guests into the heart of the ride, it is clear that the old Haunted Mansion ride has been taken over. There are brightly colored pictures on the walls and Jack himself makes an appearance! Diva Tip: The elevator soundtrack is LOUD. If you have small children, you may wish to cover their ears. This is not just when the lights go out toward the end of the elevator ride, but during the entire ride.

The ride continues the path the original ride takes, down a long hallway, but at the end of this hallway is an amazing neon colored spectacle that is not to be missed. The ghost host will introduce himself once on the ride and be sure to look out for favorite Halloween Town friends like Oogie Boogie, Vampire Teddy, Sally and Zero. As you ride through the mansion and view the amazing overlay, I dare you not to tap your toes to the music, as it is extremely catchy. 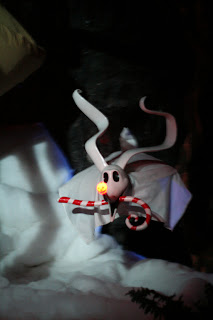 This ride has a scream factor 4 for kids and 2 for adults. For adults, the loud and the dark may not be an issue. For the smaller guests, the dark and loud and popping out of characters may presents some issues. Wheelchairs and Electric Scooters may enter through the front of the ride and a cast member will escort you to the elevator. Upon return, the path may be different than guests without a wheelchair or scooter. You will go back on the elevator the same way you came in.

Diva Tip: This ride has a fastpass option for the three months that it is open. You will want to use this option, especially during the busy holiday season.