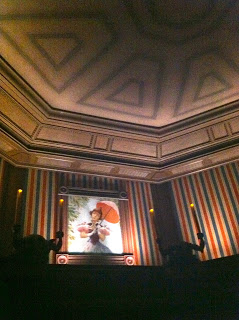 One of my favorite rides around this time of year is the Haunted Mansion in Liberty Square of the Magic Kingdom in Walt Disney World. It’s a very dark ride with a daunting theme- ghosts! 999 of them to be precise, haunting a mansion looking for more to join their ranks. The scream factor would be about a 3.5, not due to motion or anything, but due to the haunted factor. It could definitely be scary to some young kids. The ride takes place almost entirely in the dark and it is meant to creep out more so than scare directly. Your journey begins with a trip into a room which seems to have no windows or doors, keep an eye on the paintings and then look to the ceiling! This part of the ride can be made or broken by the cast member working at the ride; if they are in character for the attraction, they can put you in just the right amount of unease. If not, listen to what they say but pay more attention to the room itself. If you happen to be in Disney World during the Halloween season, check out their makeup! On certain nights during October, the cast members working at the Haunted Mansion attraction get a full on haunted makeover!
Once you board your Doom Buggy, you will be taken on a tour of the mansion and its many haunted rooms. The second to last scene of the ride is where you will hear the famous Grimm Grinning Ghosts song and it’s a delight! If you happen to encounter the Dapper Dans in October, this song is occasionally in their set! Beware of ghosts that might try to catch a ride home with you at the end, and mind your head!
The experience on the ride is amazing, the amount of detail in the ride is awe inspiring. So many special effects  were put into effect during the building of the ride that were incredibly far ahead of their time: the moving door knockers, the projections, the changing portraits and the ballroom dancing ghosts in the dining room are just some of the amazing scenes that are set in this intriguing ride! I highly suggest that if you want to photograph the ride, ride it twice, once to take it all in (and get to know the ride) and once to take pictures. However, make sure that you don’t use flash, it scares the ghosts! The newly improved queue makes the normally short line even shorter! One of the most fun activities to do while waiting in line to enter the mansion is reading the headstones throughout the graveyard, they are so witty and creative! Most of them are full of puns that make even the most morbid events seem hilarious! 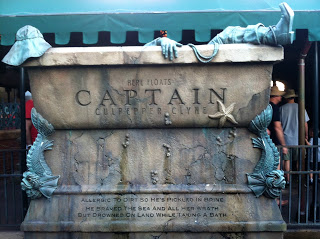 Some of them even honor famous Imagineers from the project or those who have passed away. Be sure to look out for Mr. Toad at the end of the ride, he is in the graveyard as you exit!! Make sure that you watch the headstone of Lady Leota for at least a minute or two, she may move! Also, when you are far away from the mansion, have a look at the tops of the gables, they have chess pieces on them because the designer of the WDW mansion loved chess!! However there is one piece missing…see if you can find out which it is!! 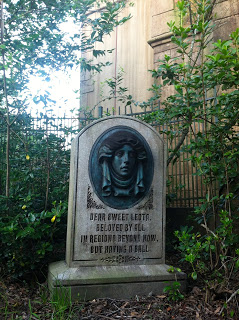