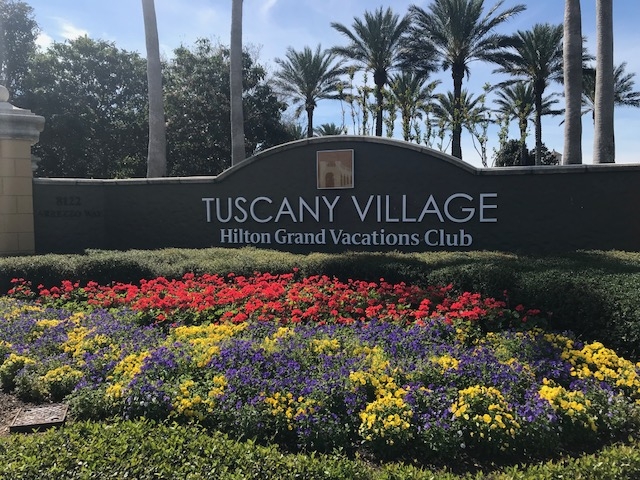 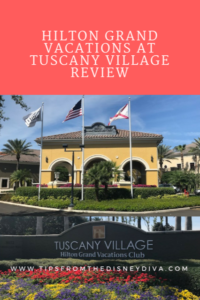 For our trip to Disney World in February this year we stayed at Hilton Grand Vacations at Tuscany Village. This was the first time we had stayed off-site when visiting Disney World so it was quite a different experience, but one I thoroughly enjoyed. When you stay at an off-site hotel you lose the Disney theming, but this hotel had so much that made up for it that I did not miss it. 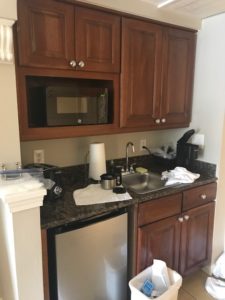 Kitchenette in the Guest Room, excuse the mess

The hotel is located directly behind the Orlando Vineland Premium Outlets and is a few miles from Sea World. It’s proximity to the Disney Parks was great. It is furthest from Magic Kingdom (about 11 miles), all the other parks are less than 10 miles away. We found that leaving the hotel about an hour before we wanted to be at the parks was more than sufficient. It gave us plenty of time to drive, park, and enter the parks. I didn’t find that to be much different from what I plan for when using Disney transportation.

We stayed at the hotel using my grandmother’s timeshare, but you can also pay for a room. The hotel has several different types of rooms to choose from:

A guest room features a king bed and a fully equipped kitchenette with a mini fridge, microwave, sink, toaster, and utensils. In addition to guest rooms, there are one and two bedroom suites available, which is the type of room we stayed in. 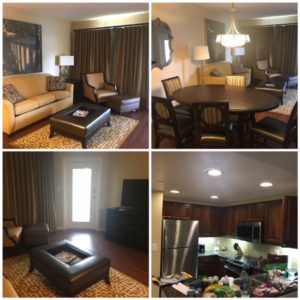 The two bedroom suites are essentially a one bedroom suite with an adjoining door to a guest room. So in addition to the all the amenities of the suite, we also had the kitchenette which came in handy when the kids were still asleep in the living room.

The suites have a full kitchen with a full size fridge, oven, toaster, microwave, sink, dishwasher, and utensils. There is a separate dining and living room. The couch in the living room has a pull out bed that sleeps two people. 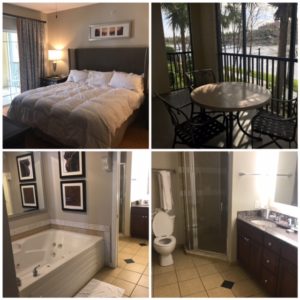 The master bedroom features a king sized bed and a giant Jacuzzi bathtub separate from the bathroom which features a shower and two sinks. The master bedroom also has it’s own door to the screened in balcony (which are featured in all the rooms). The suites also have a washer and dryer so that you can do laundry.

The Jacuzzi bathtub is enough in itself to sell me on this hotel. After spending a long day in the parks, it was amazing to be able to come back and soak in that tub for awhile. I also loved having the screened in porches. Our room overlooked the lake and I spent my morning sitting out there eating my breakfast and relaxing before the busy day began.

Price wise, Hilton Grand Vacations at Tuscany Village costs about as much as or less than a moderate Disney resort. When you think about all the amenities that you get with this hotel, it is definitely a better deal. If comparing final prices, you would need to factor in the price of a rental car and parking at the parks as well. The hotel does offer a shuttle to the parks but you must reserve it ahead of time and it is $10 per person, per day round trip. It also only drops off and picks up at Epcot so you would have to take Disney transportation to and from the other parks. 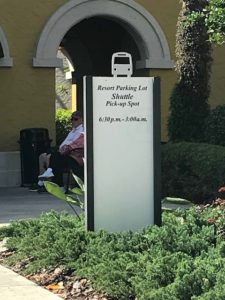 The staff and their responsiveness to requests was phenomenal. We were given a number to text with any needs and they would quickly take care of them. While we were in the parks one day we texted to request a couple more pillows for the room and they were waiting for us when we returned. The parking in front of the buildings is limited and coming back late after the parks were closed, the lot was usually full. However, we could park in the front lot by check in and there was always staff on golf carts waiting to give us a ride to our building. When you need to get back to your car in the morning, you just call the concierge and they will send someone to pick you up in front of your building to give you a ride to your car.

Located across the street from the hotel was a Publix. This was very convenient for us and gave us a chance to do some grocery shopping for breakfast things and snacks to cut down on our expenses in the parks. 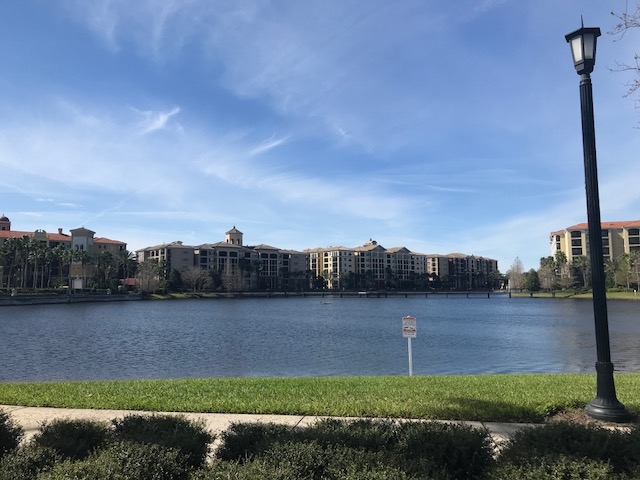 There is a sidewalk going all the way around the lake for those who want some exercise. At night the bridge across the lake it lit up with beautiful lights

As for amenities, there is a playground for children and also an activity center/arcade with different games for the kids. There are two pools on property, but as it was February, we did not visit them though I did read that they are heated. There are a few dining options available onsite. There is the Fresco Market and Deli which features sandwiches, salads, ice cream, and Starbucks coffee. They also serve breakfast from 7 – 11 a.m. You can have pizza delivered to your room from Fresh Tuscan Pizza. When we ordered from here they told us it would be delivered in about 45 minutes, but we got it in half that time. The pizza was fantastic, much better than the pizza you can order from the Disney hotels. There’s a snack bar by the pool and also the Toscana Pool and Bar Grill. The grill features many options including sandwiches, burgers, flatbreads, pasta, other dinner entrees, and a variety of cocktails.

There are also machines located on property that are similar to Redbox except the movies are free. You receive a card at check in which allows you to rent one movie at a time. Since we had two rooms, we received two cards. Our kids enjoyed being able to pick out a Disney movie to wind down with at night or to watch in the mornings while the rest of us were getting ready. 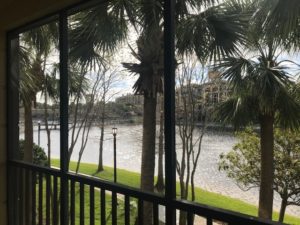 All in all, I was very pleased with our stay at Hilton Grand Vacations at Tuscany Village. There is not a single complaint I had about our stay here. I would definitely consider this hotel when booking my next trip, even when it means missing out on some of the things that Disney resorts offer, such as Magical Express and transportation to the parks. I would definitely recommend it when staying with a larger group, there was so much room for all of us and having a kitchen and washer and dryer was very handy.

Don’t know whether staying off-site is right for you? Check out my article which explores the differences in staying on-site vs. off-site.

Are you ready to book your trip but don’t know where to start? Check with Patricia at All For Dreams Travel. She can answer all your questions and best of all her services are free! Click here for a free quote.