Holidays Around the World – The Storytellers of EPCOT 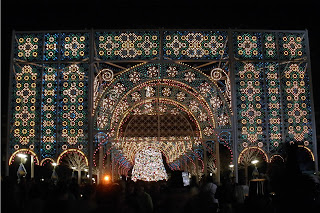 Christmas time at EPCOT is full of magic and world traditions. Every year, EPCOT celebrates Holidays Around the World with Storytellers from each of the World Showcase Pavilions. Throughout the day, Storytellers arrive in their native pavilion to tell of a winter holiday tradition from their homeland. The stories are varied and fascinating. It’s a great opportunity to learn about how Christmas and other holidays are celebrated outside the United States. 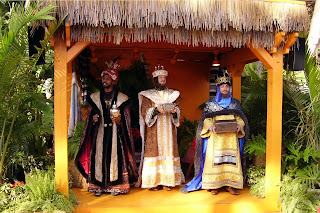 Feliz Navidad! We’ll begin our tour in Mexico. The history of the Mexican Christmas tradition is told by Los Tres Reyes Magos, or Three Wise Men. They tell of their journey, or Posada, to find the Christ child and the gifts they brought to him. This tradition of giving gifts in honor of his birth is continued throughout Mexico today on January 6th, Three Kings Day.

God Jul! We’re now in Norway, where Sigrid tells a story about a mischievous Christmas Gnome named Julenissen, who appears to help tell the story. Julenissen, who live in a family’s barn, is the guardian of that family’s welfare. Children leave porridge for him in thanks for his protection. On Second Christmas, December 26th, the children don costumes and go door to door asking for goodies.

Gung Hay Fat Choy, and welcome to China. The Storyteller in China is the Monkey King, who is very funny and happy. He tells a story of redemption and enlightenment, or how Monkey became King by defeating a monster and stealing a magic stick from the Dragon King. He was punished by Buddha for his pride, and eventually learned that the journey is more important than the destination. 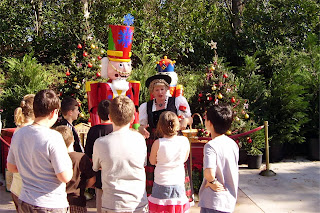 Fröhliche Weihnachten! In Germany, there are two different Storytellers who appear: Saint Nicholas or Helga. Saint Nicholas tells of traditions such as the Tannenbaum, or Christmas Tree, the first Christmas, while Helga tells of the history of Advent Calendars and the Nutcracker, as well as how children celebrate Christmas in Germany. At the end of her story, a 7′ tall Nutcracker appears and stays to take photos with Helga and the children in the audience. 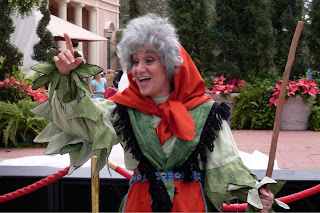 Buone Feste Natalizie! Italy’s Storyteller is La Befana, the Christmas witch, who tells how she came to bring gifts to all the children on January 5th, Epiphany. La Befana, who was once a simple woman who lived alone, when she met the Three Wise Men on their journey to Bethlehem. They asked her to join them and bring gifts to the Christ Child, but she was to busy. Later, she decided to make the journey after all, but didn’t know where to look, so whenever she found a child, she gave them a gift instead, often leaving them in their shoes to find the next morning.

Merry Christmas, Happy Kwanzaa, and Happy Hanukkah! The American Adventure celebrates three different American traditions: Christmas, Hanukkah, and Kwanzaa. Children can meet both Santa and Mrs. Claus and tell them their Christmas wishes. Then listen to the story of Hanukkah, the Jewish festival of lights that celebrates the miracle of the lamp that burned for 8 nights with only one night’s oil. And the final presentation tells about the history of Kwanzaa, the African-American harvest celebration. 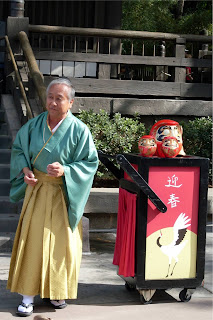 Akemashite Omedetou Gozaimasu and welcome to Japan, where a Storyteller tells about the O’Shogatsu, or New Years, customs and the legend of the Daruma doll. The Daruma doll is sold without the eyes being painted in. At the New Year, children make a wish and paint the left eye. If the wish comes true before the end of the year, the other eye is painted. Plum blossoms are used to decorate homes and to symbolize hope in the New Year.

Eid Mubarak! In Morocco, they celebrate Eid-al-fitr each winter by wearing their best clothes, and with feasting, dancing, and music. The Storyteller, Taarji, which means drummer, tells of the customs of Ramadan and Ashura. These celebrations are religious in origin and are celebrations of love and remembrance, with gifts to the poor playing an important role. Children often receive gifts of clothing, toys, and even drums at this time to celebrate the New Year. 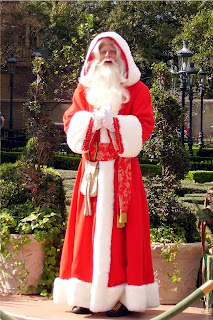 Joyeux Noel! In France, Pere Noel, or Father Christmas, tells the story of a letter he received from a little girl named Babette. He tells of Christmas through her eyes and of many of the traditions she enjoyed. One of these traditions is a great feast, called le revellion, that is eaten after Midnight Mass. Another is the Buche de Noel, or Yule Log cake.

Happy Christmas! In the United Kingdom, Father Christmas arrives singing and ringing a bell. He is very jolly and tells how many modern traditions have their roots in the England. He encourages the audience to sing Deck the Halls with him, a good Welsh carol and invites a child to help him by ringing bells. He also tells of the Druids and their us of mistletoe, which he has carries on the end of his staff and uses to make a couple in the audience kiss. 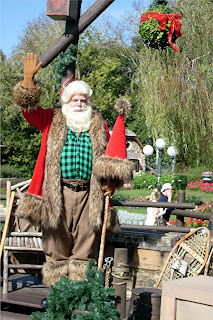 Joyeux Noel and Happy Christmas! We have now arrived in Canada and reached the end of our tour through the world’s traditions. Nowell, a lumberjack who bears a striking resemblance to Father Christmas, tells about Christmas celebrations in different parts of Canada. As he tells his story, he changes pieces of his clothing, until suddenly, he appears to be Papa Noel.

The stories told by these Storytellers are wonderful to listen to, but it can easily take an entire day, or even two to hear all of them. Each story lasts approximately 9-12 minutes. The presentations occur several times a day and a schedule of appearances can be found in the Times Guide that you pick up with your map. Diva Tip: Choose three to four stories from pavilions that aren’t located right next to each other and stop to see them as you move through the World Showcase.

Many of the Storytellers invite one or more children from the audience to help them tell the story. My niece was chosen to help La Befana by holding her broom. However, once she got up there, she decided to be shy and forgot what to say, but La Befana was great at working around it and putting her at ease.