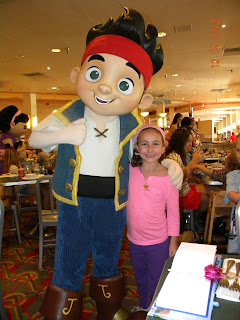 
When I was planning our Disney trip last year, which included the Disney dining plan, I knew character meals were a must.

We have a 6 year old, 4 year old, 2 year old and 1 year old. It just made sense that we would be dining at Hollywood & Vine for the Disney Junior Character Meal.  My oldest was so excited, she wanted to dress up as Izzy from Jake and the Neverland Pirates.

When we arrived at the restaurant, we waited a total of 5 minutes before being seated.  Once seated, half of our party went straight to the buffet, while the other half (the children and myself) waited for the characters to arrive.  The characters made their way around the restaurant, making sure not to miss any child or table.  When we were there, the characters were Jake (From Jake and the Neverland Pirates), Special Agent Oso, June ( From Little Einsteins) and Handy Manny. 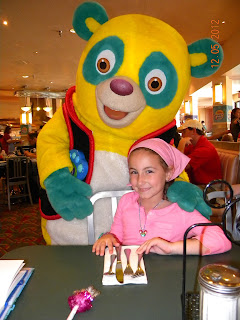 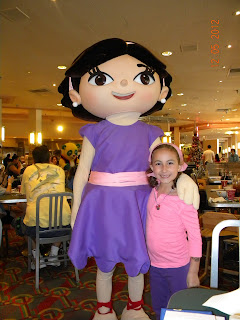 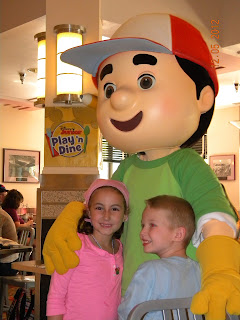 Handy Manny, Oldest Jersey Daughter & Jersey Nephew
The buffet at Hollywood & Vine was one of the best we had all week.  I was traveling with a group of 5 other adults and this was, by far, the winning meal for all of us all week.  The salads, veggies and fruits were so fresh. There was a create-your-own- pasta bar which offered a variety of sauces and add-ins for your pasta.
The buffet also offered home-made sandwiches which were also freshly made. There were also some entree items which included: ribs, pork, salmon and chicken.  Each of the items were delicious and fresh.
The children’s buffet included chicken nuggets, baked chicken, macaroni & cheese, broccoli and corn.  My daughters are the pickiest of picky eaters and they cleaned their plates twice!  I think it may have been the first (and only) time all week we didn’t have to beg our children to eat.  That’s a win in my book!
Now to the best part, the desserts!  The buffet had soft serve ice cream, hand crafted desserts and pastries and hot cobblers.  With our table of 10, we had one or two of each dessert and there was not a bad one among the bunch.
The children loved meeting the characters and the adults loved the food.  We loved the food so much we even contemplated going back for dinner.
If you are planning a trip to Hollywood Studios and you need a place to eat, I highly recommend Hollywood and Vine, Disney Junior!
Happy Eating!
~Jersey Diva
Share this...