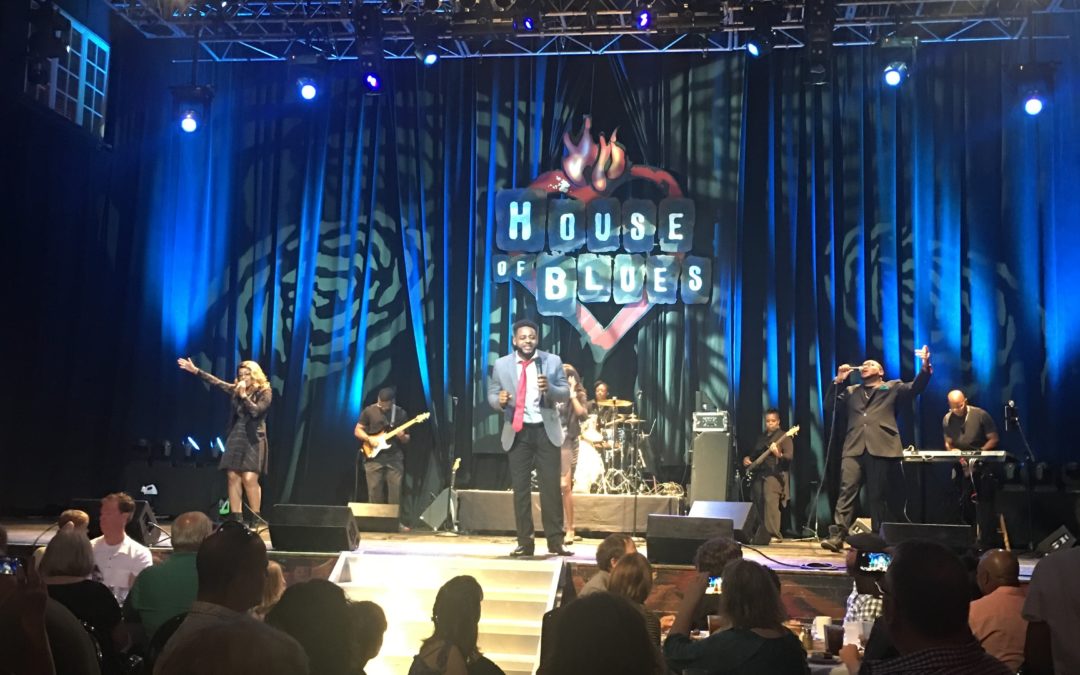 As a Florida resident and a Walt Disney World Annual Passholder who gets to visit the parks many times a year, I sometimes have to make a conscious effort not to get stuck in a Disney rut, doing the same things over and over (I know, first world problems, right?) So last month I purposely planned an entirely new experience, even though it’s something I’ve been meaning to do for years: I attended the House of Blues Gospel Brunch at Disney Springs. 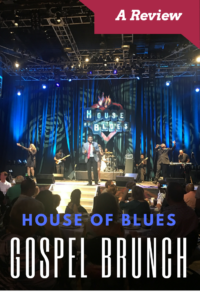 House of Blues opened at Disney Springs twenty years ago when the surrounding area was still called Pleasure Island. It is both a restaurant featuring Southern/International cuisine and a concert venue. On most Sunday mornings, though, House of Blues also offers a brunch where you can eat all your heart desires while listening to live gospel music. 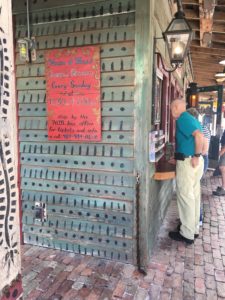 The brunch is offered at 10:30 am and at 1:00 pm. Since we were leaving Orlando that afternoon, we chose the earlier seating. The meal costs $43.50 for adults and $24 for kids 3-9. Children under three are free. Unlike most other Disney restaurants, tax *and* gratuity are included in the amount. The only thing that isn’t included are the alcoholic offerings at the bar. DVC members and Military Servicemembers receive a discount as do annual passholders (although some dates may be excluded). A recent change also allows you to use the Disney Dining Plan for the brunch.

You can book meals at the restaurant online through My Disney Experience, but to book the Gospel Brunch, you will have to either call Disney Dining or the House of Blues Box Office at 407-934-2583. I booked our tickets by calling the box office directly. I was given an order number and we arrived about half an hour early to pick up the tickets from the box office.

While everyone was waiting for the doors to open, a few of the performers came out to talk to the crowd and sang an acapella song for us. The acts do change from week to week, but upcoming acts are generally listed on the House of Blues website. 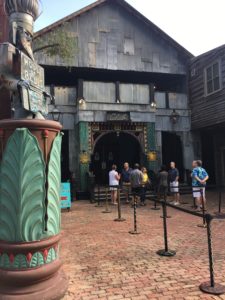 Once the doors opened, we were led to our seats by a server. The seats are assigned and are at large round tables mostly on the floor of the theater. I have read reviews online that mentioned that there are smaller tables in the upper tiers and balconies, but at our particular seating, these weren’t filled at all, and everyone was seated on the floor of the theater or just next to it. If you don’t like sharing your table with other families, this is probably not a venue for you – unless you have a really big party, you will likely have other people sitting with you at your table. The couple sitting with us told us they attend the Gospel Brunch every time they go to Disney World. 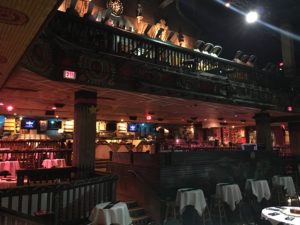 The buffet line is set up at the back of the club and in the two bar areas.

The benefit to being in line early and being seated early is that you are immediately free to start filling your plate, but not to worry – the food is abundant and constantly being replenished. There are the usual breakfast offerings – croissants and Danish, potatoes, sausage, bacon, eggs, plus Southern specialties like grits and biscuits and gravy. There is a somewhat hidden omelet station (at the bar on the left side of the stage) where you can have eggs made to order.

There are numerous lunch offerings including a salad bar that also had fruit and peel and eat shrimp, cornbread, chicken and waffles, fried catfish, red beans and rice, macaroni and cheese, and many other items. There was also a carving station with roast beef and ham. A separate area housed all kinds of desserts including cookies, pies, cakes, and bread pudding. Non-alcoholic beverages are included, and the bar was running specials on mimosas and bloody Marys.

While none of the food stood out as being haute cuisine, it was easily as good as any of the Disney buffets we have eaten at, with the possible exception of Boma at Animal Kingdom Lodge. What sets the Gospel Brunch apart, however, is the quality of the entertainment. The day we went, local gospel singer Javis Mays was performing. My daughters aren’t really familiar with gospel music, and I wasn’t sure what to expect, so I didn’t know h 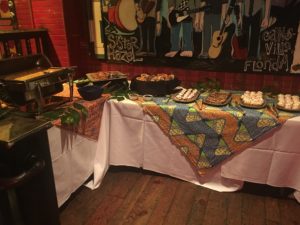 The dessert station on the buffet

ow to prepare them. But they both reacted very enthusiastically to the show, which encourages clapping, singing, and even audience participation on the stage. The singers and musicians were all incredibly talented, and it was like attending a concert, with a lot of good food thrown in as a side benefit. We had eaten breakfast at Tusker House about a month and half before we went to House of Blues, and my younger daughter remarked how much better she liked the Gospel Brunch! 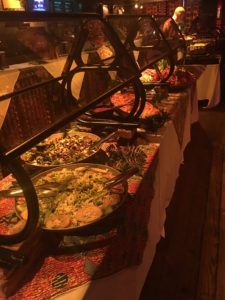 The brunch line features salads and fresh fruit as well as a carving station, omelets made to order, waffles and chicken, and many other breakfast and lunch items.

This meal is family-friendly – even though performers were on stage, you are welcome to wander around, dance to the music, or visit the buffet again and again.

It may have taken me years to get there, but it won’t take me years to get back – I’ve already recommended the House of Blues Gospel Brunch to family members who are traveling to Orlando next month, and we are planning a return visit in the spring.

If you would like FREE help planning a trip to Walt Disney World (and Disney Springs!), contact Patricia at All for Dreams Travel, the official travel agent of Tips from the Disney Divas & Devos!