How Much Disney Magic Can I Handle In One Trip? 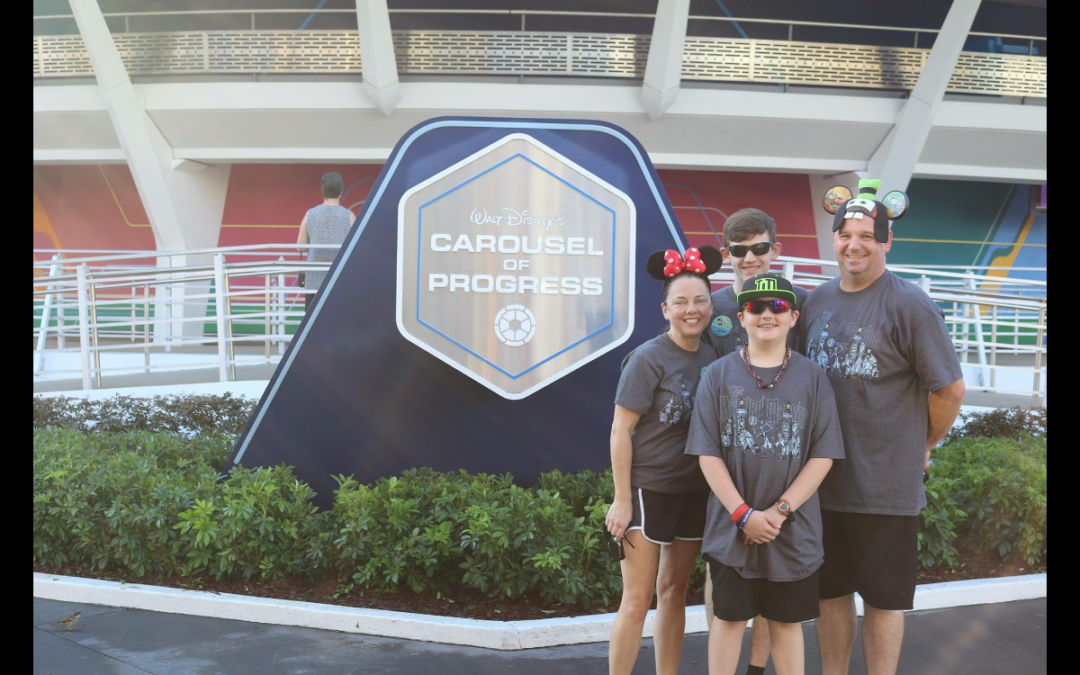 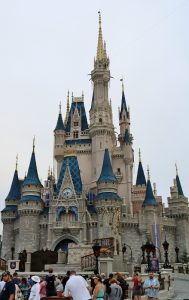 Those of us who have been blessed enough to go to Disney parks for vacation have all heard of those Disney magical moments. Moments when a Disney Cast Member picks out a random person or family to bestow some Pixie Dust on to make their trip a little brighter.  If you make it to Walt Disney World’s Magic Kingdom’s morning show, you may have noticed they always pick a special family to help Mickey and the gang open the park.  How about those lucky people who are picked to be in the Disney parades?  In previous visits to Walt Disney World, my family has been lucky enough to be picked as Walt Disney World’s first family, you can read about my experience here.  Dopey Diva’s family was picked to be the Star Wars Family of the Day once, which you can read about here.

My family has experienced many different magical moments over the years, but our last trip to Walt Disney World Resorts seemed to be especially magical.  Much to our delight, we were able to experience several different random acts of kindness, or Pixie Dust in this case, over the course of the week we were at the parks.

Our first magical moment came on our first day at Walt Disney World’s Magic Kingdom.  My family tends to hit the parks in an almost militia manner, marching to each attraction in a quick, no-nonsense manner in an effort to cut down on time spent standing in line.  Of course, there are some attractions that are going to build up a line, no matter how you handle it.  Most of you are aware, Buzz Lightyear’s Space Ranger Spin is one of those attractions that builds a line in the afternoon.  Though we do our fancy little speed walk, we still like to smile, nod and say hello to any Cast Members around.  As we approached the line for Buzz, we made eye contact with the Cast Member standing at the line entrance, greeting him with a big smile and a hello.  That’s when he stopped us and asked if we were planning on going on Space Ranger Spin.  We confirmed that, yes, we were.  He then asked if we REALLY wanted to stand in that long line, to which we replied of course not, but we would if we had to.  Let me backtrack just a moment and mention that my oldest son and I were both celebrating birthdays, and had our birthday celebration buttons on.  DISNEY DIVA TIP: Wear your celebration buttons!  He told us that since he noticed we were celebrating two birthdays, he would send us to the front of the line.  Whaaaat?  How awesome was that????  He then took us around to a “secret entrance” where he ushered us to the very front of the line, all the while we thanked him for his kindness profusely. 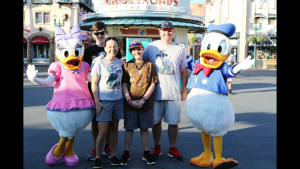 Our next magical moment came when we arrived at Hollywood Studios.  I may have mentioned, just a few times (more like mentioned it in every article I write) that my family likes to get to the parks at LEAST an hour before rope drop.  This day was no different.  We arrived and took our place at one of the empty turnstiles, and settled in to wait for the park to open.  As we waited, bantering back and forth with each other, a young man approached us from the other side of the turnstiles.  He struck up a conversation with us, then asked if we would like to help with something.  Of course we agreed, who would say no?  He said they needed help opening the park.  We were brought through the turnstiles, where he told us where to stand.  He gave us our instructions, we were to help the crowd outside do a countdown, then, since we WERE at Hollywood Studios, we were to yell “Action!” when it was officially time to let the guests in through the turnstiles.  He was actually quite funny, assuring us we wouldn’t have to make a grand speech or anything like that, and let us know that some special guests would join us for the countdown.  Before we knew it, Donald and Daisy Duck walked out to help us open the park.  We had a great time interacting with them, and really enjoyed this magical moment!!  DISNEY DIVA TIP: Get to the parks early, sleep is overrated!!!!

Believe it or not, we had yet another Hollywood Studios magical moment.  It was late afternoon and we had a pretty heavy downpour of rain going on.  We never let rain stop us from having fun, though, and we were on a mission to meet Chewbacca, Kylo Ren and attempt a trade with the Jawas.  As we were rushing, we were about to pass a lovely gentleman Cast Member, standing outside in the rain, holding an umbrella.  My husband smiled at him and joked that it wasn’t fair that he had an umbrella while laughing.  The sweet Cast Member said, “You know what?  Here ya go.”  He reached in his pocket and handed my husband four paper fast passes for any attraction at the park that day, saying he was sorry the guests were having bad weather.  Can you believe that?  Contrary to popular belief, Disney can NOT control Florida weather.  He didn’t have to do that, but he was so sweet.  We expressed our gratitude, not believing the magic we had been experiencing.  DISNEY DIVA TIP: Be courteous and kind to all the Cast Members.  He was stuck out in the rain too, he was getting wet too, despite having an umbrella.  Being courteous never cost anyone a thing! 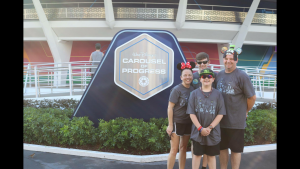 I know, I know, now you’re saying, “well she must be done now, she couldn’t possibly have any more to share,” right?  Wrong!  Our last magical moment happened at Magic Kingdom again.  We were there at rope drop, of course, but this day, we decided that while everyone was elbowing each other to get to Seven Dwarf’s Mine Train or Peter Pan’s Flight, we were going to hit Space Mountain in Tomorrowland.  We had just walked into Tommorrowland, when a young female Cast Member named Nicoletta, said good morning to us.  We all smiled and said good morning back, and she announced to us that we had randomly been picked to be Tomorrowland’s Family of the Day.  I confess, this is something we had NEVER heard of, but there’s a reason for that:  It was a brand new thing they had JUST STARTED!!  She said that, just the day before, they had unveiled the new marquee for Carousel of Progress, and asked if she could take our picture in front of the marquee.  We were the first family to EVER be photographed in front of the marquee.  She took a few pictures with my camera, then took one with her phone, saying it would be displayed somewhere there (I have no idea where, though) since we were the first family ever photographed there.  After the pictures, she asked which attraction we had been heading to.  When we told her, she escorted us straight to Space Mountain, ushering us through the fastpass line so we wouldn’t have to wait.  When we finished the ride, Nicoletta was there waiting.  She led us to the shop at the exit of Space Mountain, where we were presented  ride photos of our family, as well as a certificate declaring us the first family, and a button for each of us that said Celebrating Galactic Family.  How cool is that?  DISNEY DIVA TIP: Don’t expect the magic to happen.  What?  That’s not a tip, you say.  Well, yeah, it is.  They don’t owe you any extra magic, they do it out of kindness.  They do it when you least expect it.  Don’t go into any situation with the feeling or attitude that you are owed anything more than what the other guests are getting.  It makes the magic even more special if you approach it with that attitude. 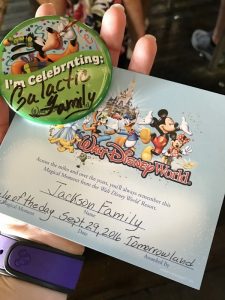 What a wonderful, magical trip we had, I’m honestly not sure if we could have handled any more magical experiences, as they were so exciting.  Of course, there were other things, such as extra desserts for our birthdays, but I don’t think I could have handled any more big magical moments.  The only thing I enjoy more than experiencing my own magical moments, is hearing about others.  Have you had any Pixie Dust sprinkled on you while vacationing at Disney?  Let us know, we would love to hear your stories.