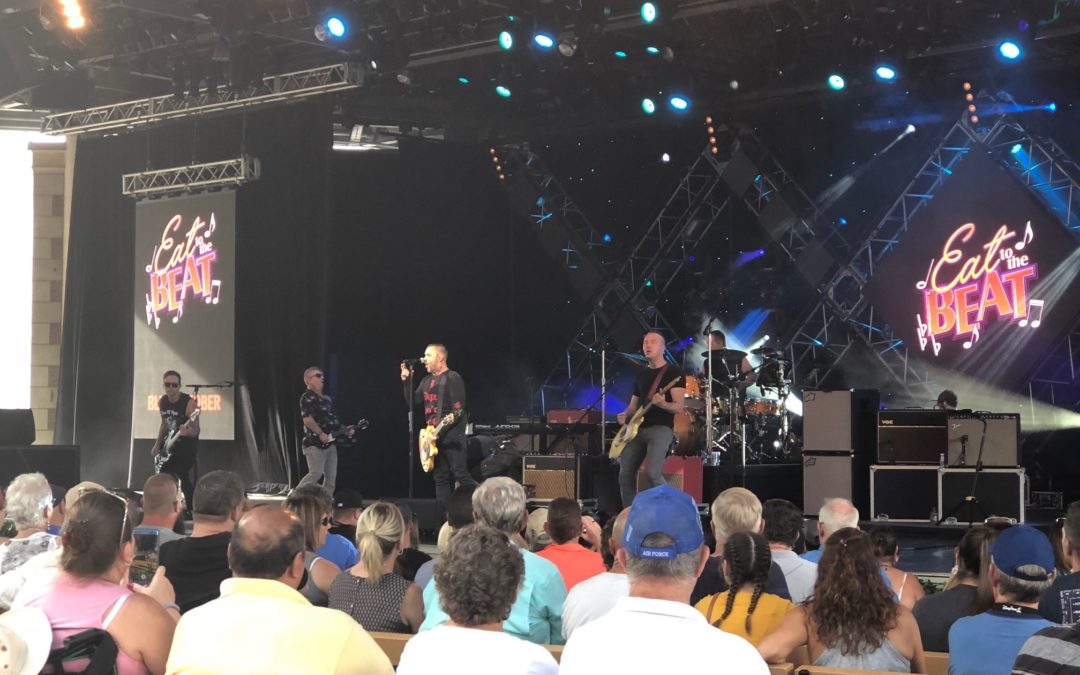 Each year, in addition to the food and wine kiosks, beverage seminars, Party for the Senses, and other special dining experiences, the Epcot International Food and Wine Festival features a concert series called Eat to the Beat. It’s a very diverse line up, everything from pop to country to R&B, with over thirty different groups performing this year. I was fortunate enough to catch Blue October performing on opening weekend, and here’s how you can take advantage of this opportunity to see a great band for free. 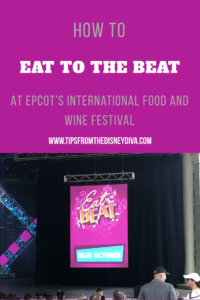 This year, there are performances every evening of the festival at 5:30 pm, 6:30 pm, and 8:00 pm. They take place in the American Gardens Theatre in the World Showcase.

Here is the lineup. There are a lot of old favorites, but some new ones as well. 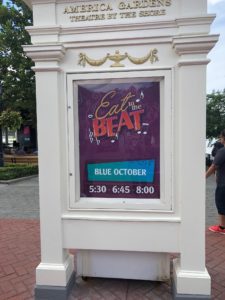 Each evening of the Festival, there are three Eat to the Beat performances at the American Gardens Theater.

Disney does have an Eat to the Beat Dining Package that you can book that will give you a breakfast lunch or dinner at an Epcot restaurant plus reserved seating. Packages start at $45 for adults and $27 for kids 3-9 (that’s for breakfast at the Garden Grill) or you can use two table service Disney Dining Plan credits. There’s even a quick service option at Liberty Inn for guests that want a same day package and don’t have reservations ($29.99). However, in my opinion, this is not a great value unless there is a group that you are absolutely dying to see from the front row of the theater.

Tip: If you can’t get a seat, you can still see and hear the group by standing at the back of the theater.

This year we were there on the second night of the Festival, on a Friday night of a holiday weekend when many locals were out, yet we had no problems getting standby seating for the 5:30 show. We walked up a few minutes before 5, and were told we could sit anywhere that wasn’t roped off and reserved for dining packages. This left pretty much the whole theater except the very front section. We sat directly behind the front section, about six rows back, with a great view of the stage.

The first concert is generally the least crowded, with crowds going up as the night goes on. Crowds are higher on weekends than during the week. Trees provide a decent amount of shade for early performances. 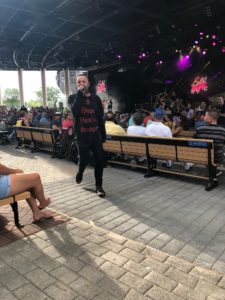 Blue October frontman, Justin Furstenfeld, gets up close and personal with the crowd.

Tip: You can divide and conquer – leave someone saving your seats and send someone else in your party out to get snacks and drinks from the kiosks in the area. You’re allowed to bring them back to your seat to enjoy.

For the month of September, annual passholders are be able to pick up a wristband to get reserved seating for a same day concert. In previous years, the bands could be picked up inside the pavilion building, but we were told that this year they will be at the entrance to the theater, on the side that is closest to the Japanese pavilion.

These concerts are a lot of fun and feature great performances that you would pay a lot to see elsewhere. Over the years we’ve seen various groups, from Living Colour to Everclear to Blue October, and each group has put on a top-notch show. The frontman from Blue October, Justin Furstenfeld, even came down into the audience several times, giving hugs and handshakes, and recounted how entranced his daughter was with being at Disney. If you can fit a performance in to your Food and Wine Festival plans, I highly recommend it.

If you’d like to experience Epcot’s International Food and Wine Festival, contact Patricia at All for Dreams Travel for a FREE quote and FREE help planning your Disney vacation!