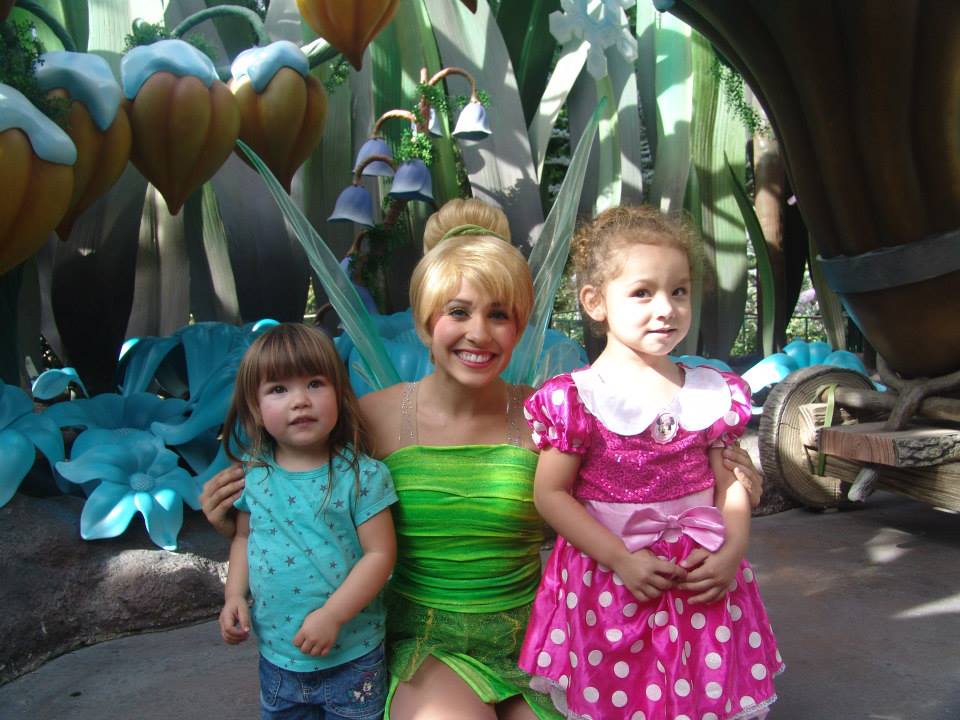 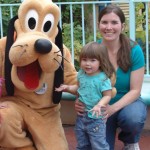 My all-time favorite vacation destination is Disneyland, hands down. There’s just no contest. As a California native, it was pretty much a given that I’d go there at least once a year from the time I was in diapers (insured mainly by the fact that my uncle used to work there and could sign us in for free). And while there are many things I enjoy about Disneyland, the characters have always been my favorite part. 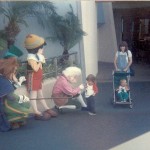 Yup. That’s me as a toddler shaking hands with Gepetto and meeting Pinocchio and J. Worthington Foulfellow. No fear. And totally ready for hugs from Disney characters. 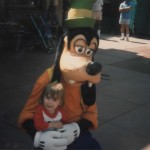 Fast forward a couple of decades, and now I’m married with kids of my own, and I want to instill in them a love of everything Disney (particularly the characters). Every time I see a Disney commercial, I feel a wave of nostalgia, and I know that my husband and I needed to plan a trip back to home state and The Happiest Place on Earth.

For our first trip with the kids, we had everything figured out- where we were staying, where we were planning on eating while at the parks, and even a list of attractions to ride, things to do, and souvenirs to buy. There was only one thing I was concerned about- how to get adorable pictures of my two year old daughter with characters twice her size.

In case you need to see how my daughter felt about characters, let’s back up to a Christmas party from 2012. 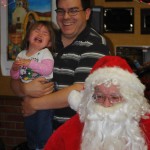 This happened again while on a play date to Chick-Fil-A with my Moms’ Group. The Chick-Fil-A Mascot (a giant, 6 ft. tall cow) was playing games with the kids. It was cute. Only my daughter was terrified and was hiding behind me for almost the entire time. She only went by the cow long enough to snatch a mint out of his hoof as a reward for a game (that her baby brother and I did for her), and once she had the mint, she was back in hiding. So you can see, I had quite the challenge ahead of me.

I have a tendency to plan things well in advance (we weren’t planning on taking our family to Disneyland until the fall of 2013), so in February of 2013, I decided that if I  ever had hopes of getting those classic pictures of your child running up and hugging characters, we would need to start practicing. Like immediately.

I began with Youtube. Since the Chick-Fil-A Cow had been so intimidating (and something we at least had the potential of seeing on a semi-regular basis), I began searching for videos of the Chick-Fil-A Cow on Youtube. I came up with this one, with the Chick-Fil-A Cows dancing to Michael Jackson’s “Thriller”. My daughter absolutely loved it. She watched it repeatedly. For days. And while it didn’t win her over on the cow the next time she saw him, it was a good start.

Disney Diva Tip: As the time for our trip came closer, I began looking up videos of actual Disney theme park characters for my daughter to look at. You can click here to view one of her favorites with Mickey and Minnie dancing. 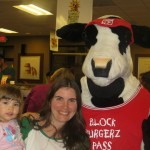 We repeated this process with any mascot we could find. Since Red Robin is one of my favorite restaurants, and they also have family nights with their mascot “Red” in attendance, we began frequenting there as well, telling Little Princess that Red was friends with Cow. We also started attending sports events, where Little Princess could meet their mascots as well. After a few months of doing this, Little Princess got so used to this routine, that after her second time of seeing the baseball mascot, Orbit, she saw him running by to head towards his meet and greet area, and yelled, “Orbit! Stop!” as she put her hand out and began chasing him. Needless to say, she wasn’t afraid of characters any more. 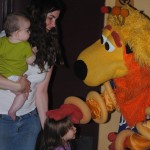 Disney Diva Tip: High schools, Law Enforcement Agencies, Restaurants, and many other stores have costumed characters that you can introduce your child to or take pictures with… for free!! Also, fairs and pageants are a great place to find mascots or “princesses”. Even if your child doesn’t meet the mascot personally, it is good to expose them to them as much as possible beforehand. Even if it’s just passing Santa Claus or the Easter Bunny in the mall on a regular basis, it makes seeing Goofy, Tigger, and Cinderella a little less intimidating.

I also wanted to make sure my daughter knew who the characters were. While she loved Mickey Mouse Clubhouse and knew those characters extremely well, we had tried to limit how much television she had watched (and being two, there was only so much she’d sit still for anyway), so I knew several of the characters would be foreign to her.

So I pulled out our collection of Disney books and DVD’s  (I pretty much have every Disney DVD known to man), and we began reading and watching them. I began with the ones that I figured we would have the greatest chance of meeting characters from- Alice in Wonderland, Aladdin, Beauty and the Beast, Cinderella, Toy Story, Tangled, Winnie the Pooh, Pinocchio, Monsters Inc., etc. Basically, anything with a princess, or that had come out recently (or where I knew there were character meet and greet areas).

Disney Diva Tip: Picking movies or books that have rides, restaurants or other attractions based on them at the theme parks (such as Dumbo, Snow White and the Seven Dwarfs, and Peter Pan) also work out well too, because then the rides and other themed areas will make more sense to your child. For a list of recommended movies, you can read Disney Diva’s suggestions here. 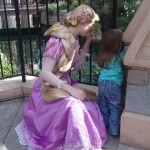 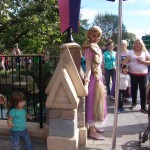 So November rolled around, and it came time for the big test- how would she do? We started off with the “face” characters- Anna and Elsa from Frozen, followed by Rapunzel and Tinker Bell. Little Princess was nervous around Anna and Elsa (she didn’t want me to leave), but warmed up to Rapunzel (she kept trying to show Rapunzel the ducks in the moat…. Rapunzel was very sweet and accommodating, even mentioning, “Well, I do like ducklings!” And she even spent a few minutes playing hide and seek with Little Princess and asking her if she had just escaped a tower too. Did I mention how much I loved Rapunzel? She was AMAZING… best meet and greet ever!!), and spent most of her time trying to tell Tinker Bell that she wanted to ride “the rockets”, aka the Astro Orbiter which was located nearby. 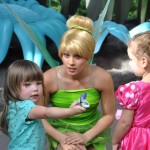 Then we tried a couple of the fully costumed characters. Pluto, Goofy, Sulley from Monsters University, and the not quite costumed characters, Mater and Red from Cars. Little Princess did great! Not only did we get pictures of her hugging Goofy and Sulley, but she wasn’t terrified of them at all. 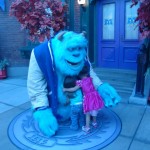 And as her proud mommy, Character Diva, does the happy dance for having one more awesome thing in common with Little Princess- our love of Disney characters. 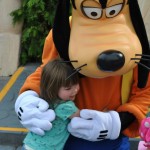 Disney Tip: We were accompanied on our daughter’s first trip to Disneyland and California Adventure with some of my extended family members, including my cousin’s daughter, who was also two. I think the fact that Little Princess had someone along with her also helped make the experience less scary. Whether it’s an older sibling, a friend, relative, grandparent, or even yourself, it can make all the difference to have someone with you. In the words of Winnie the Pooh, “It’s so much friendlier with two.”