How to Receive Autographed Postcards from Your Favorite Disney Characters 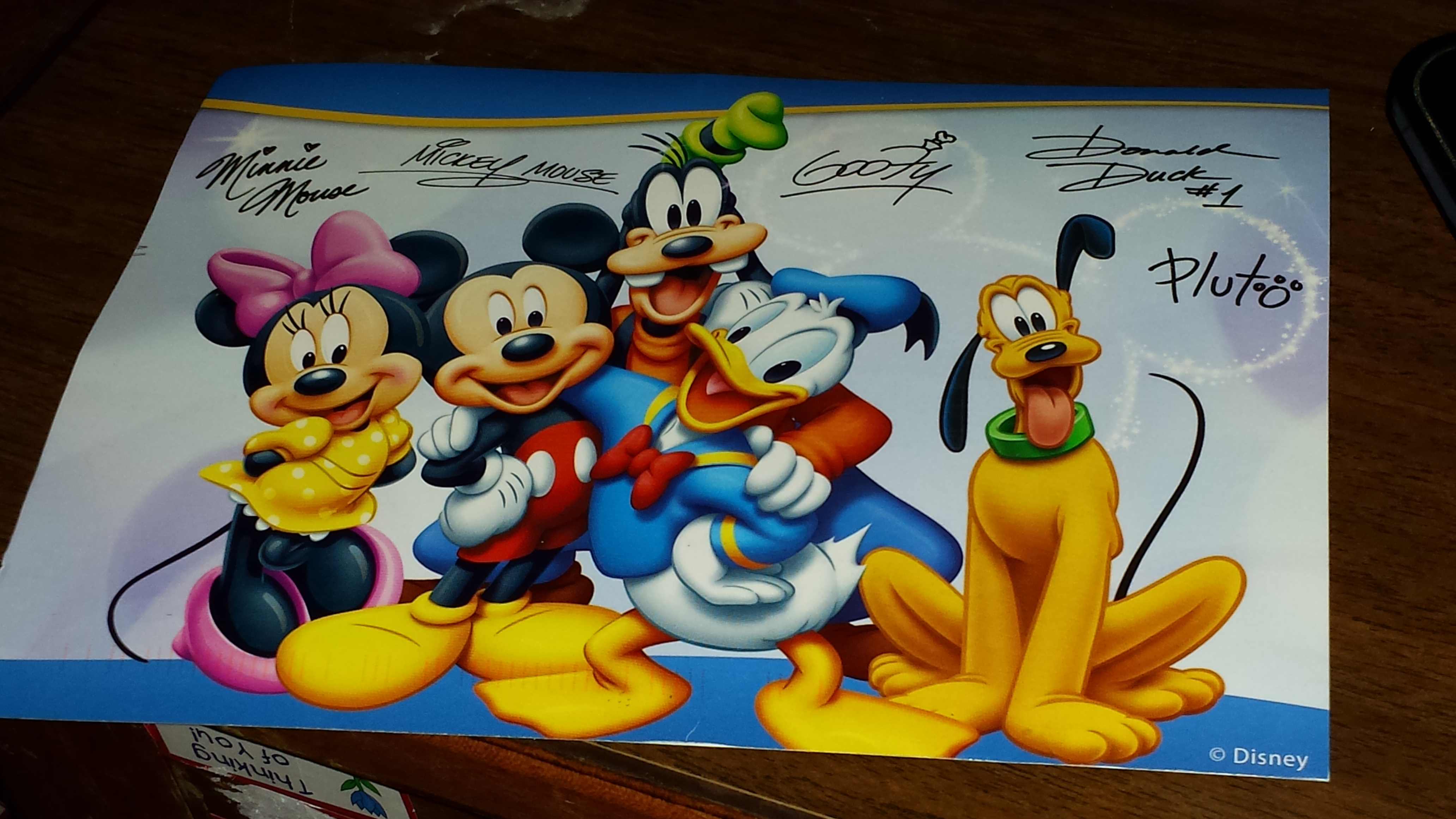 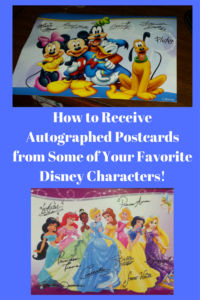 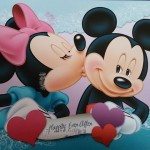 I am proud to announce, that there is a fun way for your child to interact with Disney characters, and practice their writing skills- by writing their favorite characters a letter!

I did this project with both of my children, as well as my niece. Because she is still young, my daughter dictated the letter for me to write. Obviously older children can write their own letters. For all of you teachers out there, this can be a fun thing to incorporate into your lesson plans while still meeting those pesky standards!

They can write about anything- why they love that particular character so much, what their favorite Disney movie is, how they hope to see them on their next trip to Disneyland or Disney World, or even just talking about themselves…. how old they are, what school they go to, favorite color, etc. etc. etc. It really is up to them!! The main point is to just have fun and let your child or class enjoy writing a fan letter that they will receive a response to! Disney Diva Tip: This can also be a great activity to help prepare your kids for an upcoming Disney vacation. Not leaving for a couple months, but want to help get them excited?  Or maybe you just want to give them something to do so they’re not bouncing off the walls asking is it time to go? Have them write a fan letter! Problem solved… at least temporarily. 🙂

Some things to be cautious of however- while Disney says you can write to any character, your postcard will most likely have multiple signatures and the “main one” on the back may not be from the original character you wrote to. For example, my daughter wrote to Donald Duck, and my son wrote to Mickey Mouse. They both received identical postcards of the “Fab Five” (Minnie, Mickey, Goofy, Donald and Pluto) with their signatures on the front. On the back, they were each addressed to my kids’ first names, and then had the following message, “Hi ya’ from your special pals! Your Pal, Mickey Mouse & Pals”. 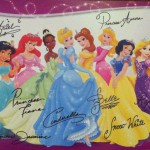 My daughter and my niece wrote to the Disney Princesses (Belle and Rapunzel), and again, they received identical postcards with most of the Disney Princesses (Jasmine, Ariel, Tiana, Cinderella, Belle, Aurora, Snow White & Rapunzel). This time the back said, “May All Your Dreams Come True, Love Cinderella and my Royal Friends.” So you can imagine that there might be some confusion if you think you’re writing to Rapunzel, and find out that Cinderella was the one who wrote the message on the back.  Disney Diva Tip: In this case, it might be best to write to have your child or students write to Mickey or Cinderella, and that way you can avoid the issue all together and the extra signatures are just like a bonus. Plus, for those teachers doing a Cinderella unit, this can also be a fun activity to engage your students.

My favorite part of this activity though is that it is free (minus the postage you pay to send the letter to begin with). Disney pays the postage to send you the postcard, so all you have to do is write your letter, include your mailing address, mail it, and then wait around for your friendly mail carrier to deliver your postcard to your door. Disney Diva Tip: Just make sure the address you have them send it back to is clear. We sent several letters to both locations (Florida and California), and while we received the ones from Florida rather quickly, apparently the people in California couldn’t read my handwriting or read it wrong because they sent it to the wrong address. All of the postcards were lost except one which still magically appeared at our house a few weeks later. 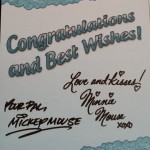 Another great thing about writing fan letters, is that you aren’t limited to only fan letters! Two friends of mine who are getting married this year sent a wedding invitation to Disney and received a postcard with Minnie kissing Mickey and on the back. It said, “Congratulations and Best Wishes! Your Pal, Mickey Mouse, Love and Kissies, Minnie Mouse, XOXO”. I also have been told you can send birthday invitations and other announcements and receive a postcard. Just make sure you do it early. Disney Diva Tip: Disney recommends sending it 4-6 weeks early, so if you want to give the postcard to someone for a wedding or a birthday, make sure you allow plenty of time for it to arrive.

For the actual addresses to send your letters to, please see below: 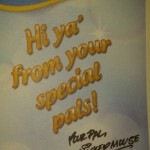 Disney World will send you an autographed postcard when you write a letter to the following address:

Disneyland will send you an autographed postcard when you write a letter to the following address: 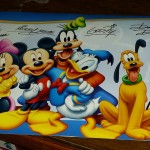 Also, for those of you who may have done this a while ago, I know they used to send autographed black and white pictures of a particular character, but I have been told they stopped this a long time ago and now they just send postcards. Have any of you tried this before? What were your results? Let us know your experiences in the comments below!! And if you have received postcards from characters other than the princesses and Fab Five, please feel free to share those too!

November 2015 Update: Disney Junior now has a way you can receive a letter from Sofia the First! While they don’t guarantee a response, they are running the program through the end of 2015. We wrote Sofia back in October, and received our letters in November. It took about four weeks for us to re 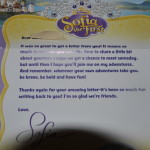 The letters we received from Sofia were addressed individually to each of my children, as well as mentioned their names in the heading (Dear _____,) after that. The messages were identical. The message from Sofia reads, “Dear ___, It was so great to get a letter from you! It means so much to me that you took the time to share a little bit about yourself. I hope we get a chance to meet someday, but until then I hope you’ll join me on my adventures. And remember, wherever your own adventures take you, be brave, be bold and have fun! Thanks again for your amazing letter- it’s been so much fun writing back to you! I’m so glad we’re friends. Love, Sofia” 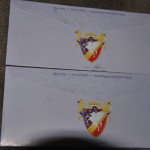 Both my 4 1/2 year old daughter and 2 1/2 year old son really enjoyed receiving their letters. Because really, who doesn’t love to receive mail, especially from one of your favorite characters? If you haven’t done so yet (and it’s still 2015), I highly recommend doing this with your child or grandchild. There are two options (writing your own letter or doing it on the computer). If you choose to do it on the computer, you have the option of typing out a message, or having Fauna help guide you through the process and offer suggestions on phrases to talk about and stickers to decorate it with. Then you just print off your letter and send it in the mail! You can find more information about it here. The address to write to Sofia is:

June 2015 Update: For those of you who have been waiting for an update, One of our writers spoke to a fellow cast member who said that as far as she understood, the program was still going on. We did attempt to write Lightening McQueen & Mater as well as Anna & Elsa back in March at both locations to see if we would get a response, and so far, we received one autograph from Mickey and Pals with the Fab Five (pictured above) for Lightening McQueen and Mater from the FL location. We have not received anything for my daughter yet at either location. I’m not sure why we haven’t received my daughter’s postcard from FL yet, as they were mailed at the same time, but for now I would say your best bet is to try the FL location (just be prepared for a Mickey and Friends postcard, or possibly a Cinderella one).

March 2017 Update: And if you’re looking for something different, one of our writers, Pink Diva, was able to record this message from Mickey. While it doesn’t actually say someone’s name specifically, if you wish to share birthday wishes from Mickey, we hope you enjoy it! Want a chance to win a FREE personalized message from one of your favorite face characters, such as Anna, Elsa, Gaston, Aladdin or Tinkerbell? Click here to find out more about winning a personalized message from your favorite Disney character here!

Update March 2017: Our site receives TONS of questions asking whether or not postcards can be received internationally. While I could be wrong, my understanding is that this program does NOT exist outside of the United States (though you are certainly more than welcome to try, and if you get a response, please let us know.) However, for those of you who are outside the United States, all hope may not be lost!  I’ve recently discovered a Disney e-card program, which I believe can be used anywhere. For more information on sending Disney e-cards, click here.

Best of luck, and let us know if you have any other questions!