How to Use the Single Rider Line at Disney Parks 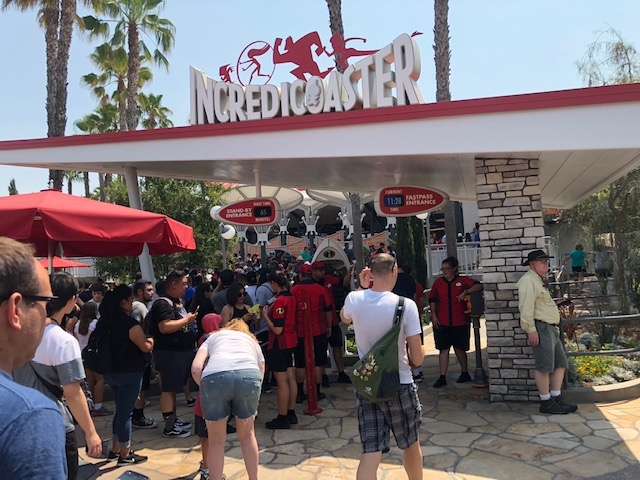 These days it sometimes seems that you have to plan out your Walt Disney World or Disneyland vacation months ahead of time. Many people compile spreadsheets and calendars trying to figure out when they should make dining reservations or FastPass+ reservations. Some folks claim that it has robbed their vacation of all the magic, and there’s nothing more heartbreaking than watching a family have a meltdown when they realize that all the “marquee” attractions at one of the parks have standby lines that reach into a several hours-long wait. 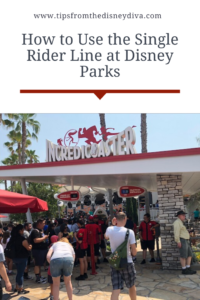 The good news is that there is some hope for the seat of the pants traveler who does not like to plan. Disney parks (including those overseas) all have what is called a single rider line, and it can be a fabulous time saver.

What is a Single Rider Line?

Disney attractions have various seating configurations. Several attraction vehicles, like Test Track or Radiator Springs Racers, for example, have rows that are three seats across. But many parties consist of two people or an even number of people leaving some seats empty. 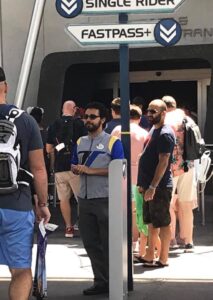 To load certain attractions efficiently and to minimize wait times, Disney will fill these empty seats by using a single rider line.

A single rider line is, as the name implies, an attraction line that is for single riders. This doesn’t mean that your family or your party can’t stand in the line together. What it means is that your party will likely be split up across several ride vehicles as you fill in empty seats.

You might get lucky and get to sit next to or in the same vehicle as your friend/family member. But you also could be in a completely separate car or on a different track.

Why Would You Want to Use the Single Rider Line?

The single rider line can drastically cut your wait time. You may even have a shorter wait than those with a FastPass+ for the same attraction.

You can use the single rider line in conjunction with Fastpasses as part of your overall park strategy.

At Epcot, my family will often select a FastPass+ for Soarin’ and then choose to go ride Test Track as single riders. That way we get to experience two top tier Epcot attractions with very little wait for either of them.

Why Wouldn’t You Want to Use a Single Rider Line?

If you have small children or fearful/shy riders, you may not want to use the single rider line since your party will inevitably be split up. 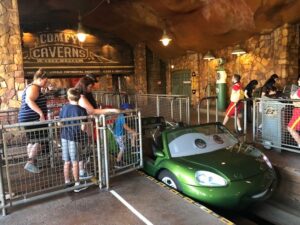 The three across configuration of the ride vehicles at Radiator Springs Racers means that there are plenty of seats for single riders.

Single riders may also miss interesting parts of the queue. The Test Track single rider line, for example, bypasses much of the interactive part of the line where you get to build a custom ride vehicle.

How Do You Use a Single Rider Line?

At the Walt Disney World resort, the single rider lines are fairly straightforward – they are clearly marked at the front of the attraction. We found the same to be true at Disneyland Paris.

This is not always the case at Disneyland and Disney California Adventure. The lines for Grizzly River Run and Indiana Jones Adventure were way more obscure and I had to ask a cast member for directions.

Which Attractions Have Single Rider Lines?

The parks with the most single rider lines are Disneyland and Disney California Adventure Park. My daughters and I were pleasantly surprised when we took a last-minute trip to the parks last summer during a freak heatwave and were able to cram in quite a few rides in just a few hours. 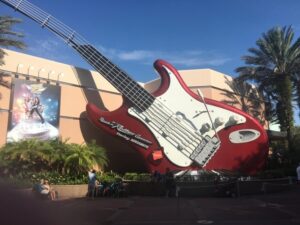 Rock ‘n’ Roller Coaster is the only attraction at Hollywood Studios to have a single rider line.

Here is a current list of attractions with single rider lines at the California parks:

At the Walt Disney World Resort, the options are way more limited, unfortunately. There are currently only three attractions with single rider lines (although I have heard that Flight of Passage was built with the capability in mind). 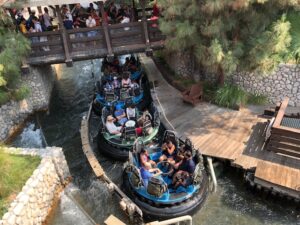 On hot days, it saves a lot of time to use the single rider line at Disney California Adventure’s Grizzly River Run.

It would be great if the non-California parks would add some more single rider lines. As the resorts build popular new areas like Pandora, Galaxy’s Edge, and the upcoming Marvel-themed Avengers Campus, Disney executives should keep in mind that guests don’t like to pay a lot of money to stand around and wait in line. The virtual queue for Rise of the Resistance is a step in the right direction, but a simple single rider line could solve a lot of problems

Have you ever used the single rider line at any of the parks?

Thinking about a Disney trip? Contact Patricia at All For Dreams Travel for a quote and FREE help in planning your vacation.