I took a Virtual trip to Disneyland!- Disneyland Adventures Review! 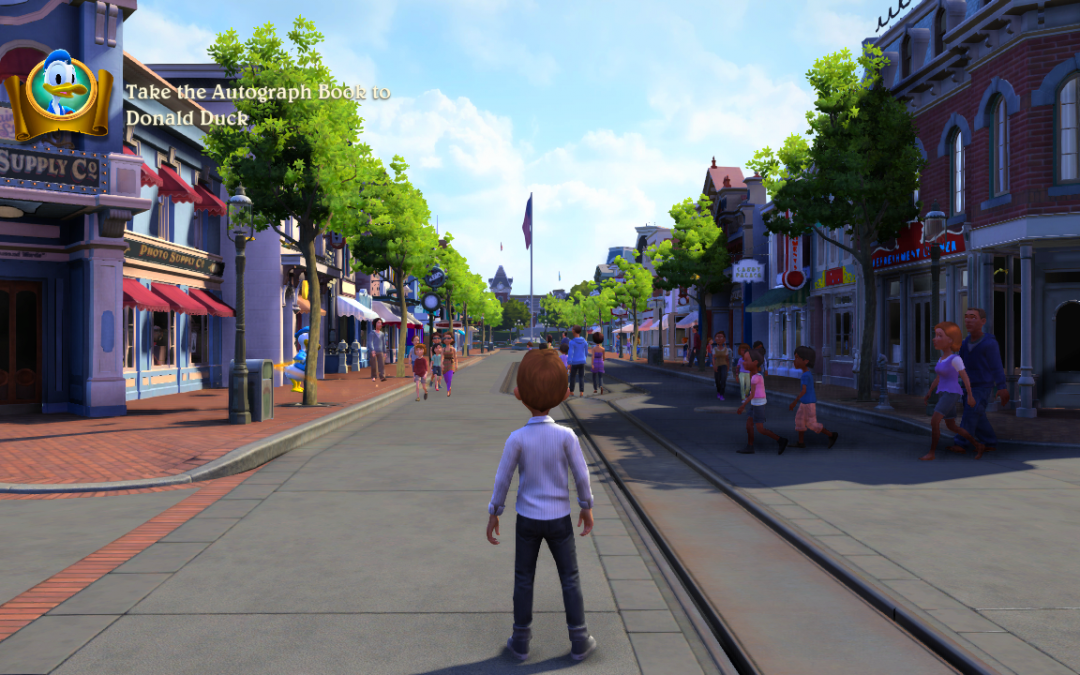 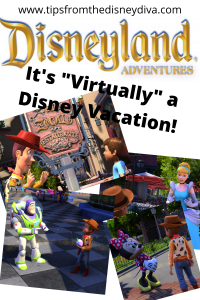 Long story short: I’ve been stuck in my house during quarantine and I want out! And a while ago on the “Toy Story Video Games” article, a reader suggested I play “Disneyland Adventures” and review it here, so I thought, ya know what? Why don’t I do that! So I bought the game, sat down, played it a bit and I’m excited to tell you about my virtual trip to Disneyland.

First things first, I make my avatar. There are not too many options but I guess this is as best as it will get. Shortly afterward Mickey greets me and gives me an autograph book. 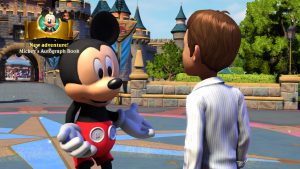 So Mickey asked me to do stuff but… I want to go to Indiana Jones!

“Will you go get Donald’s autograph for me?” asks mickey.

And I get to fulfill my lifelong dream: Run around Disneyland at top speeds with no adult supervision!

My day at Virtual Disneyland:

Disneyland Adventures features a 1:1 scale virtual Disneyland to explore and everything is there. Granted the game is a couple of years old so some things aren’t up to date. Toontown is still there for instance rather than Galaxy’s Edge. But I’m going to play this virtual vacation the same way I would if I was in person. Indiana Jones is ALWAYS FIRST. Hard rule.

I get there and it’s closed. I can’t interact with it. I guess it’s under maintenance? That happens a lot.

Well, if Jones isn’t open, I need to head over to Space Mountain. Along the way, I get very distracted… Buzz Lightyear! We high-five, Flamenco dance, and he invites me to join Star Command’s battle against the Evil Emperor Zurg by playing Buzz Lightyear Astro Blasters! 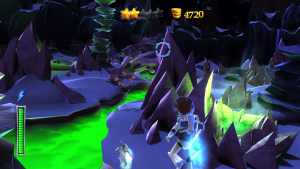 All of the attractions are basically the same. You travel along a pre-determined path and point at stuff to shoot it or push it out of the way.

Attractions: All of the attractions in this game work the same way. They’re all on-rails shooters. You fly around the screen, pushbuttons rapidly, that sort of thing. Along the way, there’s coins and secret Mickey emblems to collect.

Now I’ve gotten a lot of coins and you know what that means: It’s time to shop for souvenirs! I head over to Star Traders and I trade in my virtual coins for…

And so I give up my character customizations and put on a bland t-shirt with Woody’s picture on it. It cost me 50000 coins. Worth every one! And then later I spent 100000 more coins to get the full Woody costume so now I look like my idol.

Shops: You can go to most of the shops in Disneyland. Each one is virtually the same with the same items except for merchandise, photo albums, and Autograph books. the “merchandise” will usually include specific pins for you to keep and not trade with anyone. I think that’s how it works.

This is the “real” way you progress through the game. It’s more of a simulator/ chill game with a non-competative nature. You don’t progress so much as just do stuff. I guess you could say the game “ends” when you collect all the pins, clothing options, and autographs.

So I go on Space Mountain and that’s fun then it’s off to Big Thunder Mountain to …. 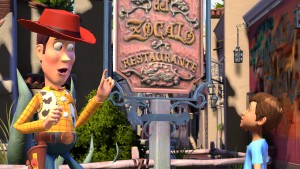 Character interactions are fun but understandably limited. You can get their autograph in a virtual autograph book, high five, dance, hug, and most will give you a task. One thing this game does have on the real thing though is that all the characters will talk to you and not just the “face’ ones.

So I spend way too long interacting with Woody and he tells me to deliver a note to Jessie.

“Yes Sir Woody! I will literally drop any agenda I have currently to do that thing you asked me to do!”

So I do and that’s when I learn the disturbing truth: There’re horse thieves loose in Frontierland! It’s up to me to find clues to track them down!

Character missions: The game gets you to explore the park by giving you missions from characters. These are very simple: find items and come back. Very cut-and-dry. When you finish you are usually rewarded with a Pin or, very rarely, a special item that you can use in the park-like a laser pistol or a magic fairy wand.

That reminds me. I probably should get around to doing what Mickey asked. So I get Donald’s autograph and give it to Mickey who just straight up gives me a smartphone to take pictures. That seems excessive but whatever. I’m not complaining. Besides, there are tons of pictures to take. There’s even Photopass opportunities! 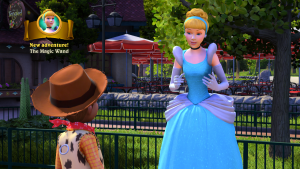 Cinderella and her friends the mice (mostly the mice I’d wager) will make you different costumes as you find materials. You also unlock fun costumes from gameplay. Customizing your character is a game-long exercise.

I screw around a bit more, jog through fantasy land and I’m stopped by Cinderella. She says hi and hands me a magic wand then says that if I find some cloth hidden around Fantasyland that she, with the help of her mice friends, will make me some spiffy new clothes for a ball that’s happening later.

And I respond with “Princess. Do you not see my Woody costume? I’m ready for anything”.

Anyway, that’s when I looked at the clock and noticed just how much time I spent running around Disneyland Time to call it a day I think.

QUICK NOTE ON MULTIPLAYER: There is a multiplayer option for this game and it supports up to two people. unfortunately though, when I started it up we learned that only the first player controls where you go and the second player may only play the minigames. I didn’t get any captures of it because my brother left right as we started.

Holy cow this game is fun. Not so much for gameplay reasons, but the fact that it’s a virtual Disneyland with all of the intricate details down to the T. That alone is the most fascinating part of the game and what makes it worthwhile. The collecting missions are fun enough for their exploration aspect. And while all of the available attractions are pretty much the same, some of them lend themselves well to the format. Space Mountain was disappointing as an on-rails driver, but The Matterhorn was awesome as one!

That said, there are some places and items that I can’t interact with and that is a little disappointing. For instance, It would be really cool if I could go into the theater on Main Street and watch Steamboat Willie, or if the gift shops were actual stops rather than a cast member standing outside them. There are also some weird things that would make the game better and easier but aren’t open. Things like Disneyland Rail Road or The Monorail.

Even just some small things would make the experience that much better. Being able to activate things like Drinking fountains for instance.

So it’s not a complete substitute, but it’s definitely worth the cost of the game and I don’t have any issue recommending it to you if you love Disneyland and want to experience it again at home. The game is available on Xbox and on any Windows 10 PC through the applications store or (my preferred place) on the Steam PC gaming store. 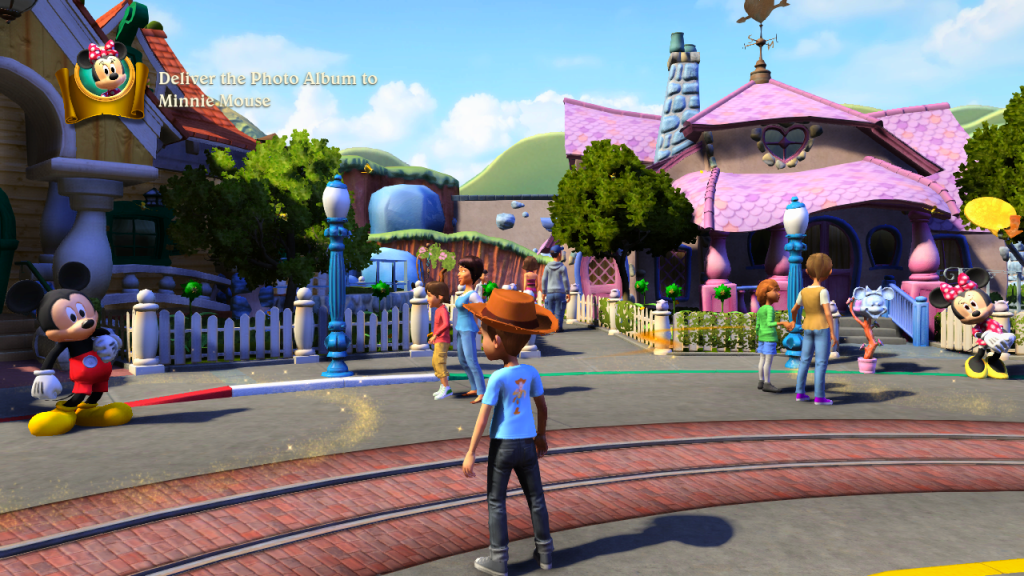 At the end of the day, Disneyland Adventures is a fun romp around a full-scale Disneyland park. the minigames leave something to be desired but it does scratch that itch. At least temporarily. Combined with its relative availability, I totally recommend this game as a great Virtual Disney experience.