In case of an Emergency at Walt Disney World

This trip I witnessed something TWO TIMES that I’ve never seen before at Walt Disney World. Though, I’m sure they happen hundreds of times a day what with there being THOUSANDS of people staying on Disney property, visiting parks and taking Disney Transportation. I know you’re dying to know…WHAT??

Unfortunately I saw one first hand with my own daughter as blood gushed from my then 20 month old’s head.

On the first day we came in we decided to go over to Ft. Wilderness (our first time over to it) and eat at Trails End Buffet then later join Chip and Dale for the Campfire Sing-along. I’ll have to tell the truth and say that I wasn’t that impressed with Trails End. The food (what I got to taste of it) was good, but none of the waitresses (until the emergency) bothered to talk to us and its A LOT of money to not get an “experience” too. There are no characters there and the staff don’t really interact. So for my $5.00 more a plate I’d rather go over to Whispering Canyon and enjoy myself there, basically same food. 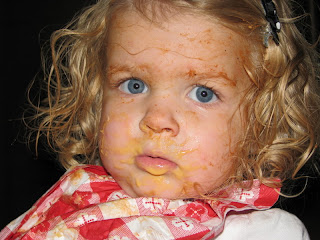 My daughter managed to eat the few oz. of pizza and mac and cheese that didn’t get smeared on her face and she was bored pretty fast. She was squirming all over the place and so I decided to just take her into the Arcade (which is attached to the restaurant) to let her pretend to play some games and give my husband and family some peace to eat. 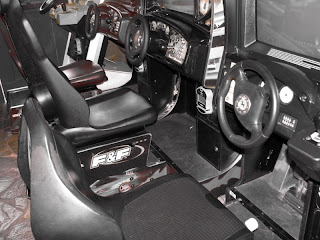 There are four “driving” games lined up in a row in the arcade and my daughter was enjoying playing with the steering wheel. I sat in game #4 and she was sitting in #3. There was another kid about 8 driving in the #1 game. Well, my toddler daughter decided she was going to move over to game #2 and since she’s not even 2 and can’t gauge the distance she didn’t quite make it. And I heard her head land with a thud. At first I thought it was just a typical toddler bump until she started screaming and lifted her head and blood was POURING from a gash in her forehead where she hit THIS little baby. 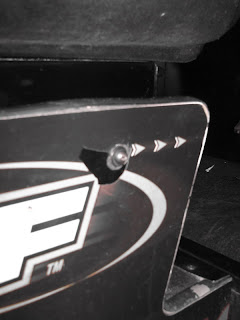 A big, nasty, pokin‘ out BOLT.

So I grabbed her and moved back into the dining area to try to get some napkins to compress on her head as quickly as possible. She is SCREAMING and, well, everybody can see the blood all over my hands and her face and I’m thinking…. “this is an eating establishment. Pretty sure they don’t want to see a lot of blood at the buffet” so I take her outside to try to compress in order to slow down the bleeding.

Suddenly the MASSES descend upon us. I look up and, I kid you not, there is:
~ my mother
~ 2 waitresses (neither of which are the cruddy waitress for our table)
~ 2 completely RANDOM kids of about 8 or 9 who are asking her name and staring at the blood pouring out of the gash.
~ 1 restaurant manager on a phone. I hear her saying into the phone “yes, be advised we have a 2 year old with a major head trauma here. Yes, she is bleeding. Yes, she is breathing for now.”

All this time I am not panicking as I’m in first aid safety zone trying to slow down the bleeding and keep these people out of my babies face who is squalling b/c there are random strangers calling her name LOUDLY over her cries and trying to put wash rags full of ice on her head?!

Within about 3 minutes the:
~ Security Officer comes out and begins taking detailed notes of what happened.
~ What appears to be the coordinator for all of Ft. Wilderness doing some head nodding and getting some reports from the restaurant manager.

The restaurant manager is still on the phone with the paramedics giving strange sounding updates about my child who, as far as I can tell, has mostly stopped bleeding.

Within about 10 minutes 2 paramedics walk up.

So as they check my daughter out I look around and realize I have, like, 12 people all hovering around my daughter to make sure she’s ok. Of course more nosey buffet-eaters leave out of our door (which normally they WOULDN’T) b/c they wanna find out whats going on.

The paramedics were AMAZING and decided that giving her stitches would just further traumatize my little one so they give her the only band-aid they can find. a HUGE blue crayon. 😉 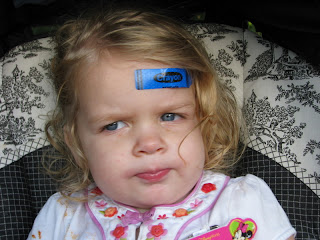 Nothin’ says “I got an owie” quite like a massive band aid.

She was grumpy for a while after that. 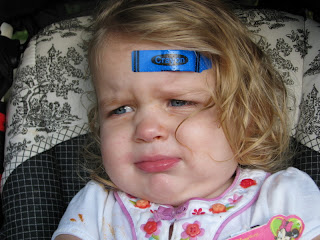 Within an hour she was happily chomping on a s’more acting like nothing had even happened. 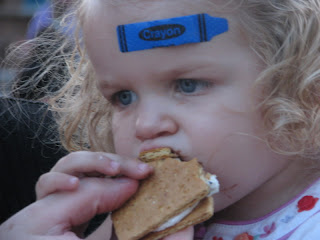 We also saw a man fall and bust his head wide open while waiting for park opening at Hollywood Studios one morning. I was AMAZED to watch those Disney Park goers (not staff, just people on vacation) launch into their trauma training while waiting for the paramedics arrive. It was good to watch people care.

I tell you all this to tell you that Disney has got some good help ON PROPERTY that can get to places (even those as “remote” as the back of Ft. Wilderness) in a pretty quick amount of time.
So if there is ever an emergency rest assured that the Disney Paramedics are on the case.

Make sure if you have an emergency that you look around and check the time and try your best to remember all the surrounding circumstances b/c you WILL be asked to repeat it multiple times to multiple people. 🙂
PS. We never got ANYTHING for her fall. When they took our room number and stuff I felt sure that a “toy bribe” or something was in the works. They seemed scared the whole time I would sue, but I’m NOT that kind of person. It was as much my fault as anybodies for not keeping her off stuff, but we didn’t even get our meal “paid for”. ugh
Share this tip!