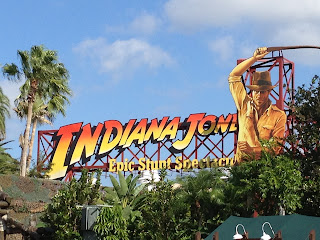 The 30 minute action packed live stunt show is thrilling and exciting to see. This is a show for all ages that features gun fights and explosions at 3 different Indiana Jones movie sets.

You want to get there early to get in line to get yourself a great seat to see all the action. Also, if  you are 18 or older you will have an opportunity to get picked from the audience to participate in the show as an extra.

They start off with a scene from the Raiders of the Lost Ark , when Indy is in the temple to acquire the gold statue. The stunt man playing Indy comes down from the rafters with a rope and the adventure begins as he works his way up to the small statue.  After placing the bag of sand in place of it, the boulder comes out and…you have to see the show to get the full details.  I can’t spoil it for you! 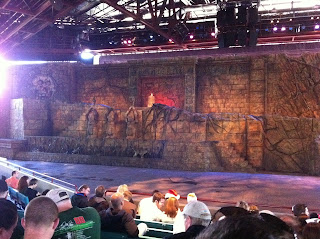 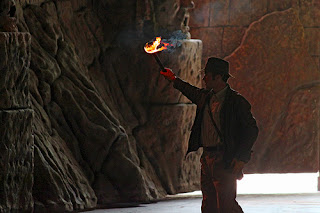 I will say, the cast does a great job of explaining how the stunt men and women in Hollywood are used in the shots.  The stunt coordinator and the  director talk to the audience and explain what should or will happen in the shoot.  In the mean time, the ground crew moves the scenery to get ready for the next shot of the production that they are simulating.  At times it leaves you on the edge of your seat, even if you have seen the movies and you know what is about to happen.

I would recommend bringing a camera or a video recorder. I like video recording the best to capture the show to create a DVD later.  But I also have gone to the show twice so I can get photos for my photo scrapbook! 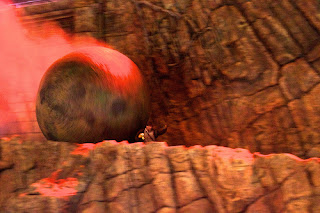 Try and sit in the middle about 3-6 rows up from the front to capture all of the show.  Also if you want to try and get in the show, when they start asking the audience to stand up and raise their hand to be an extra, wear a bright color shirt or hat to stand out. I noticed most people that get picked have an attention getter.  Each show I have gone to they have picked three women and three men.

The second shoot is a in town scene that involves the extras that were picked, fist fighting, gun fights, and chase up to the roof tops with various stunts.

The last scene of the shoot takes place with the German airplane. I am not giving any spoilers for this stunt scene. I really want to save the surprise when you attend on your vacation!

On Sunday nights the park usually has the extra magic hours for Hollywood Studios that night and they offer a later show that is around  6:30 / 7pm. You do not have to worry about the weather because they have the whole seating area covered.  Enjoy the Stunt Spectacular, it is worth stopping by and watching. Action!!!   Enjoy the show.

As you leave , make sure you exit all the way to your left (when sitting facing the stunt scenes ). Go out the gate up there and there is some awesome props that where similar to what was used in the movie.  I will display a couple of the photos below. 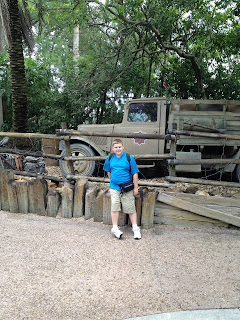 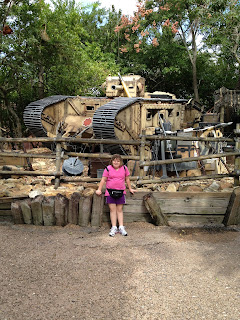