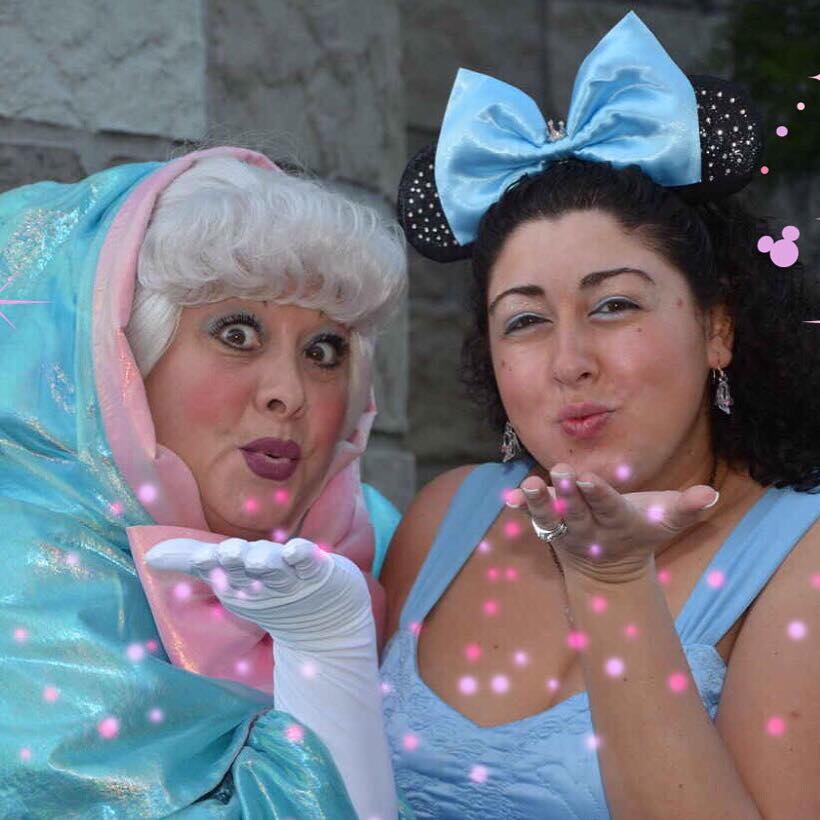 If you have made it to the Tips from the Disney Diva website, then more than likely you are a Disney Fan. If you ever watched a Disney movie, been to a Disney Park, or even just planned a Disney vacation, I’m going to go out on a limb and say you might be a Disney Fan! But every so often a person comes a long that is OBSESSED with Disney and all it has to offer. These people I like to call Disney Super Fans. They go above and beyond in incorporating Disney into their everyday life, making everything just a little bit more magical. 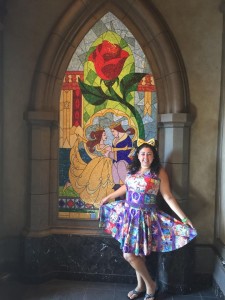 One Disney Super Fan in particular I’d like to let you guys meet in today’s article. This woman has been a Super Fan since before she was born – incorporating Disney into many of her life’s moments (like her wedding and honeymoon!). Despite living in Massachusetts, this Super Fan and her husband spend almost an entire month of their lives on Disney property throughout the year via parks and cruises. Collecting a plethora of Disney items and taking Disney Bounding to a entirely new level – she is the epitome of a Disney Super Fan! Everyone, please meet Angela Luongo! 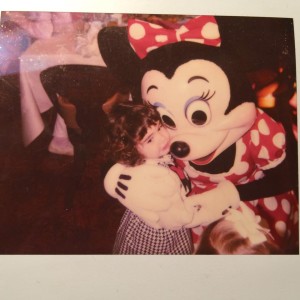 Angela has loved Disney since the beginning, when her mother decorated her nursery with a magical Disney theme in mind. She still has her first stuffed animal she received in the hospital when she was born – a Minnie Mouse (her favorite character). Her very first Disney trip was when she was just six months old! One of her fondest memories of her childhood trips is when she and her family celebrated Christmas at the Grand Floridian. “I remember being in Disney on Christmas day with my family and grandparents and getting my Christmas presents from my family at the Grand Floridian. it was so different not being home for the holidays but it was a special memory I will always remember.”

Before she knew it, Angela was evolving into a Disney Super Fan. Gradually she started collecting Disney merchandise and photos from her trips. Today she has an entire Disney themed room filled with dolls, toys, plushies, statues, snow globes, etc and her collection is still growing!

Collecting just wasn’t enough though to satisfy Angela however. She needed another way to express her Disney Side. That’s when she discovered Disney Bounding! Being a fan of all things Disney made it difficult for her to narrow down what outfits she wanted to create. Since Angela primarily Disney Bounds on her 10-12 day vacations, she coordinates her outfits based on where she goes and the places she eats each day of her trip.

For instance, check out the Wilderness Explorer themed outfit she wore when she met UP characters Russell and Dug at Animal Kingdom. Or take a look at her Ursula inspired dress for the Villainous Halloween Party at Magic Kingdom. She really does go all out! 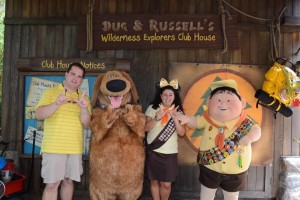 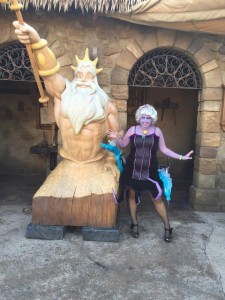 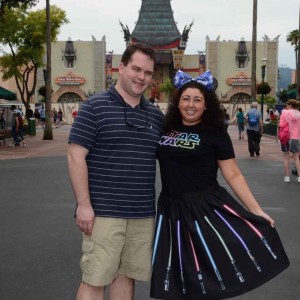 But where does she get these amazing outfits? Well, Angela does frequent Hot Topic and Her Universe for specific items to fit into her wardrobe, like this light saber skirt from Her Universe. However, Angela’s mother, Rita, has the magic touch when it comes to character inspired clothing creations! Angela says, “She is a very talented person and each trip I go on she always makes me something special to wear.” The two work together using custom fabric they find locally. But the outfits are never complete without some handmade jewelry and of course, a specially made pair of ears! Here’s a few of Rita and Angela’s Disney Bounding outfits they have created. 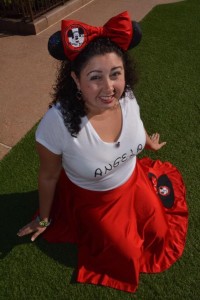 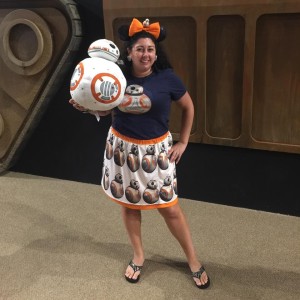 Angela has so many outfits put together for her vacation she can barely fit them into one suitcase! But it is all worth it in the end if she can express herself and show off her Disney Side! All her hard work has paid off too, as she has been mentioned on several sites such as HerUniverse.com  and several Disney Cosplay Facebook pages for her Disney style. 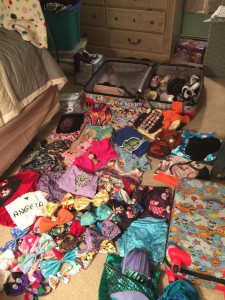 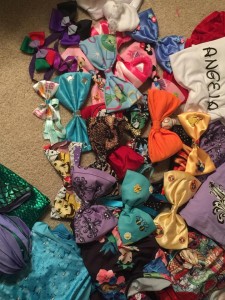 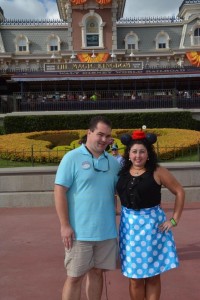 If you are interested in learning how to Disney Bound like Angela, she says the first step is to pick a character you like. “Start with an outfit and coordinate from there with accessories. It doesn’t have to be extravagant. Minnie mouse wears polka dots, and a bow then add some pearls or a bow necklace with earrings and there you go your bounding as Minnie!” Sounds easy right? You can also check out Eugine’s Diva’s article on Disney Bounding here. 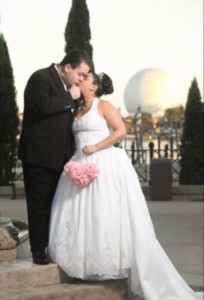 All of Angela’s Disney inspired magic caught one fellow’s eye. David Luongo, captivated by Angela, had to get to know her better. Their relationship grew and before you knew it he knelt down on one knee and asked her to marry him while on the Disney Fantasy! The two had a Disney inspired wedding and of course, no wedding would be complete without a trip to Disney for a honeymoon – or should I say “Disneymoon!” David and Angela even got professional photos done in their wedding attire at Epcot while in Walt Disney World to commemorate the occasion. Just look at those lovebirds! 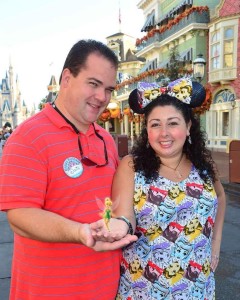 Now the two work at a toy and collectibles store where you can find tons of Disney merchandise! Together they enjoy seeing Disney movies, like Star Wars VII (for the third time!) with friends and going on trips to WDW and on Disney Cruises.

Angela also has her own Facebook page called Disney Fans and Friends. “Our group talks about all things Disney related from movies, merchandise, vacations, photos and anything in between! We are a fun drama free group who all share the same passion for Disney!”

Since we are a Tip oriented website here at Tips from the Disney Divas I asked Angela to share a few of her best tips for visiting Disney Parks. Here’s what she came up with:

3.Think ahead for your trip:

If you have kids make or get an autograph book before you go.

Take an umbrella or poncho as it most likely will rain at one point during your trip, it will save you some $$ so you don’t have to buy one at Disney.

Finally, I will leave you all with the what Angela wants you to know the most about her:

“My passion for Disney is so much more than anyone can imagine. Disney has been a huge part of my life since I was born, and I am not ashamed to call myself a Disney Super Fan!” 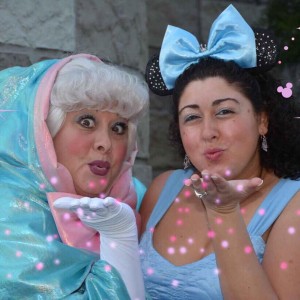 Are you a Disney Super Fan? Let us know in the comments what makes you super into Disney!

***Disclaimer – We at Tips from the Disney Divas and Devos hope you enjoy reading our articles, and encourage you to share any you feel may be of interest to someone else. We do ask, however, if you choose to share the photographs attached to our articles, you give credit to the photographer. All photos in this article are the property of Angela Luongo. Thank you for your cooperation and sharing our love of Disney!