It’s True, I Am a Fan of Stitch’s Great Escape. 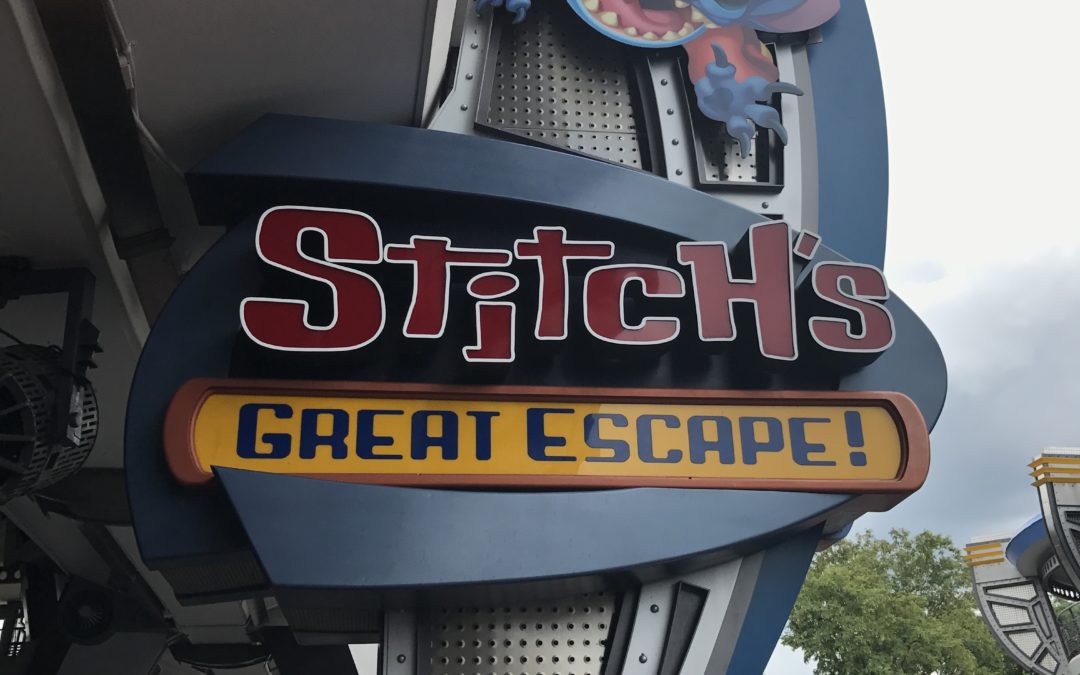 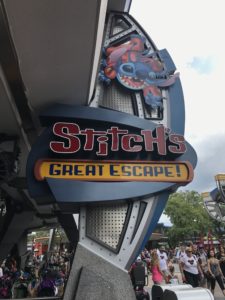 I’m not ashamed to admit it. I am a fan of Stitch’s Great Escape.  This poor attraction has gotten bashed and battered by the public since it opened, replacing Alien Encounter, but I know at least three other people besides me who actually love the attraction.  Of course, those three happen to be my husband and two sons, but no matter, they are still fans.  As I write this, I am one of the four people on earth mourning the closing of Stitch’s Great Escape.  Oh, I know that as of now, it’s still operating seasonably, but we have all heard those rumors of a permanent closure.  Many a Walt Disney World goer has been celebrating the thought of the possible closure, but my family is one of the few who will miss it.

I have seen comments from many guests who refuse to even give poor, maligned Stitch a chance, based on the nasty and horrible reviews they have read on-line.  Let’s be honest, no one is going to love every single attraction Walt Disney World has to offer, but that’s the great thing about Walt Disney World, there are a wide variety of attractions to tempt every guest.  We don’t have to love them all, there are plenty of others to enjoy.  I do suggest at least trying them all if you can.  I refuse to not try an attraction based on negative reviews.  What irritates others may appeal to me, so why should I not give it a try? 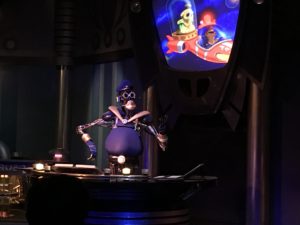 Let’s have a little synopsis of what goes on at Stitch’s Great Escape.  After watching a short intro video, we enter a hallway of sorts with a couple of levels to fit more people in.  As guests stand in a line, we get to take part in an Intergalactic Training Session with yours truly in the photo above.  We learn about becoming guards with the Galactic Federation Prisoner Teleport Center.  We also have a lesson in prisoner teleportation here.  We see an adorable, cuddly yet naughty alien “beamed” into a little tube, before a message comes through that a Level 3 Security prisoner has been captured. 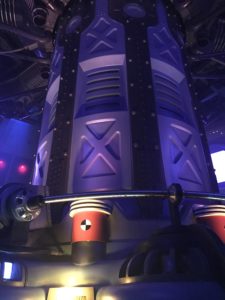 From here, we are ushered into the next room, rows of seats surround a large teleportation device, the room is circular.  This is where you can always pick out the guests who have never experienced Stitch’s Great Escape before.  As guests come into the room and pick whatever seat they want, many will try to pull the overhead harness over their heads.  Don’t bother, you can’t make them stay down yourself, they are programmed to lower on their own when the “ride” begins (it’s not an actual ride, it’s more of a show).  The harness itself is part of the reason people hate this attraction.  As it lowers, it stops when it feels resistance.  Many people tend to slump in their seats, so the harness lowers all the way down, and when they try to sit up, the harness will not rise, so they are stuck.  It can also get a little painful as there are a couple of times our beloved Stitch bounces on your shoulders.  There’s a simple solution to this….I actually sit much, much taller than I normally would, thereby raising my shoulders to a much higher level.  Once the harness stops, I relax again and there’s no pain for me throughout the show! 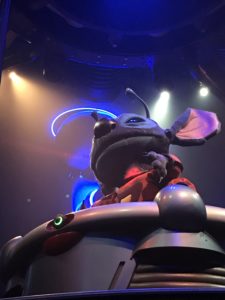 Once the show begins, Stitch is teleported into the room, amidst much smoke and noise.  Problems occur, lights go out, and the feisty Stitch escapes.  The lights stay out for quite a while, so if your younger kids freak out over no lights, but a lot of noise, they may want to sit this one out.  To be honest, though, I’ve heard much more screaming and crying from children in the It’s Tough To Be A Bug attraction at Animal Kingdom than I have ever heard at Stitch.

There are speakers built into the back of your seats, so you will hear Stitch bouncing all over the room, getting into much mischief along the way.  What can I say, he wouldn’t be Stitch if he didn’t get into mischief, right?  The other part of the attraction that draws so much hate comes from the scent of Stitch burping chili dogs and blowing into your face.  No, of course it’s not a pleasant scent, but come on.  I’ve smelled worse standing in line behind a crowd of people who have been sweating all day at the parks, or a poor little child with a soiled diaper.  No one has ever died from smelling that for five seconds, I guarantee it!  As the show ends, we finally see on a screen that Stitch has been located.  Where?  Why, he’s hanging off the balcony of Cinderella’s Castle at Magic Kingdom, of course.  How much cuter could that ending be?

All in all, it’s a cute show.  Certainly undeserving of the absolute and utter hate and disgust it has received from many a guest.  To each his own, though.  I respect others rights to despise Stitch’s Great Escape, as long as they will respect my love of it.  My point is, again, no one is going to love every single attraction.  Do yourself a favor, and try as many as, if not all of the attractions that Disney has to offer.  Take every negative and positive review with a grain of salt.  You aren’t going to agree with every other person out there about everything, so you may not agree with them about a Disney attraction.  Make your own choice.  If you don’t like it, at least you have learned what you don’t like, and can spend more time in the future at an attraction you DO enjoy!