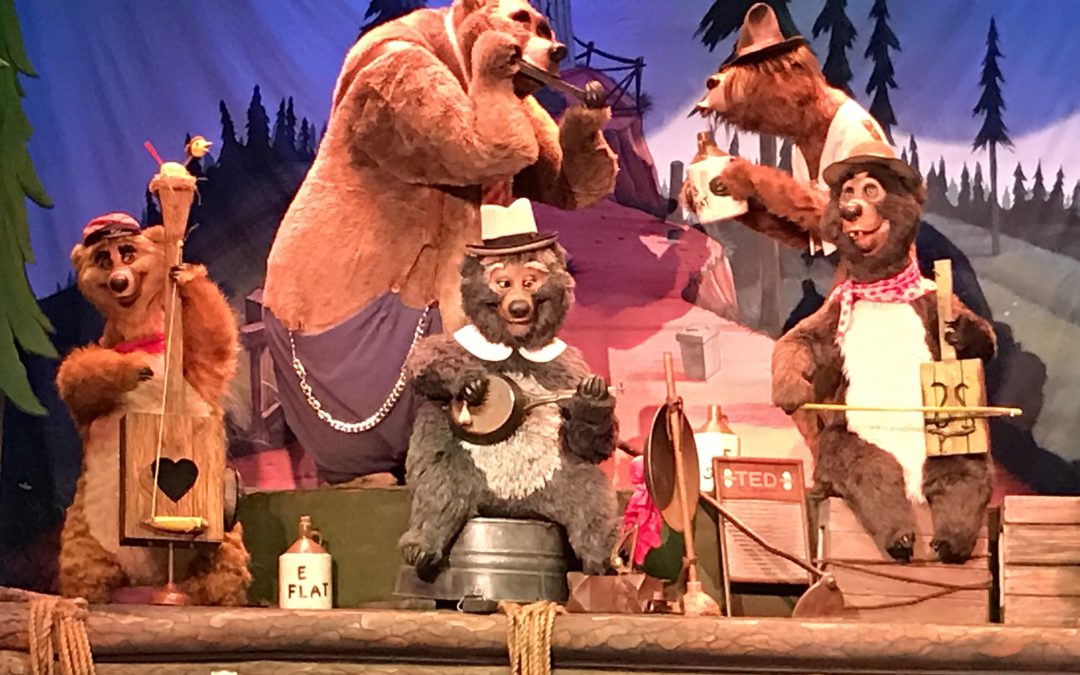 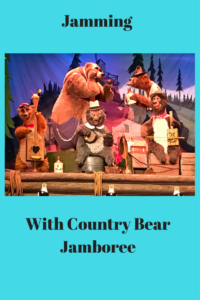 I won’t lie, I have seen comments from others that they find this particular show to be a little too corny for them.  I, however, happen to love it.  Where else can you go in Walt Disney World to enjoy the antics of 18 hillbilly bears who sing and play instruments?  Bear with names like Teddi Bara, Gomer and Liver Lips McGrowl?  Where else can you find a show with buffalo, stag and moose heads on the wall who happen to also talk and sing along?  Is this show really corny?  Yes, yes it is.  The cheese-factor is very strong with Country Bear Jamboree, and I love it!  I say, bring on the cheesiness! 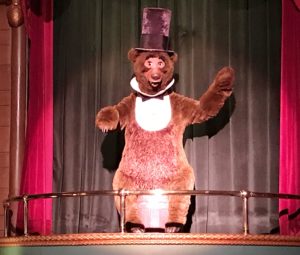 The Master of Ceremonies is a tall brown bear with a tall top hat by the name of Henry.  He is responsible for introducing each new act and song, and he does it with as much finesse as any audio-animatronic bear could.  Henry also plays the guitar, adding to the talented if slightly silly mob of musical bears. 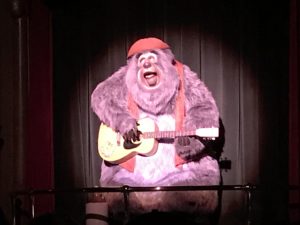 This musical performance is fun for all ages, not just the young, but the young at heart as well.  If you have been more than once, and have already learned some of the songs, you simply can’t resist stomping your feet, clapping and singing.  You may even have a favorite song, I know I do.  I have to confess, my favorite is “Blood on the Saddle” sung by none other than Big Al in his deep, slow southern drawl.  If you haven’t heard that one yet, you are in for such a treat. 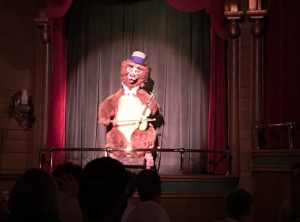 I also have a great fondness for Henry and Wendell, who sing the song, “Mama Don’t Whoop Little Buford” as a duo.  The song is quite cute and funny.  These two characters were actually based off of a real country western duo, Homer and Jethro.  Homer and Jethro originally wrote and performed this song back in their day as well, though a few of the lyrics were changed for the show for comedic effect. 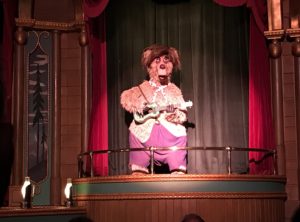 Remember that name I threw out there earlier, Liver Lips McGrowl?  The picture above is the great and handsome Liver Lips himself, and you can probably see where the name comes from by looking at him.  Liver Lips sings a heart touching tune about the love of his life titled, “My Woman Ain’t Pretty (But She Don’t Swear None.)  How can you resist a guy who sings about his gal with such love?

Another favorite tune of mine is sung by the Sue Bonnets, a trio of sisters.  The song title is, “All The Guys That Turn Me On Turn Me Down.”  Do you sense a theme here?  Humor is a big factor in this show.  Yes, it may be a little cheesy or corny, but it’s quite funny too.  It also makes a great air-conditioned resting spot in that hot, humid central Florida weather.  If you don’t like cheesy, corny shows, at least try it for the air-conditioning and opportunity to rest your aching feet if nothing else.  What do you have to lose?  If you plan it right, you can also enjoy a yummy meal at Pecos Bill Tall Tale Inn and Cafe as well, as you will be exiting the show via the outer edge of the restaurant.

So now are you intrigued and willing to give Country Bear Jamboree a try by checking out the show? Are you ready to start planning your magical vacation and enjoy all that Disney has to offer, but you aren’t sure where to start? Contact our recommended travel agent, Patricia at All Dreams for Travel, and she can do all the work for you. Best of all, all of her services are FREE, all you have to do is click here to request a quote!