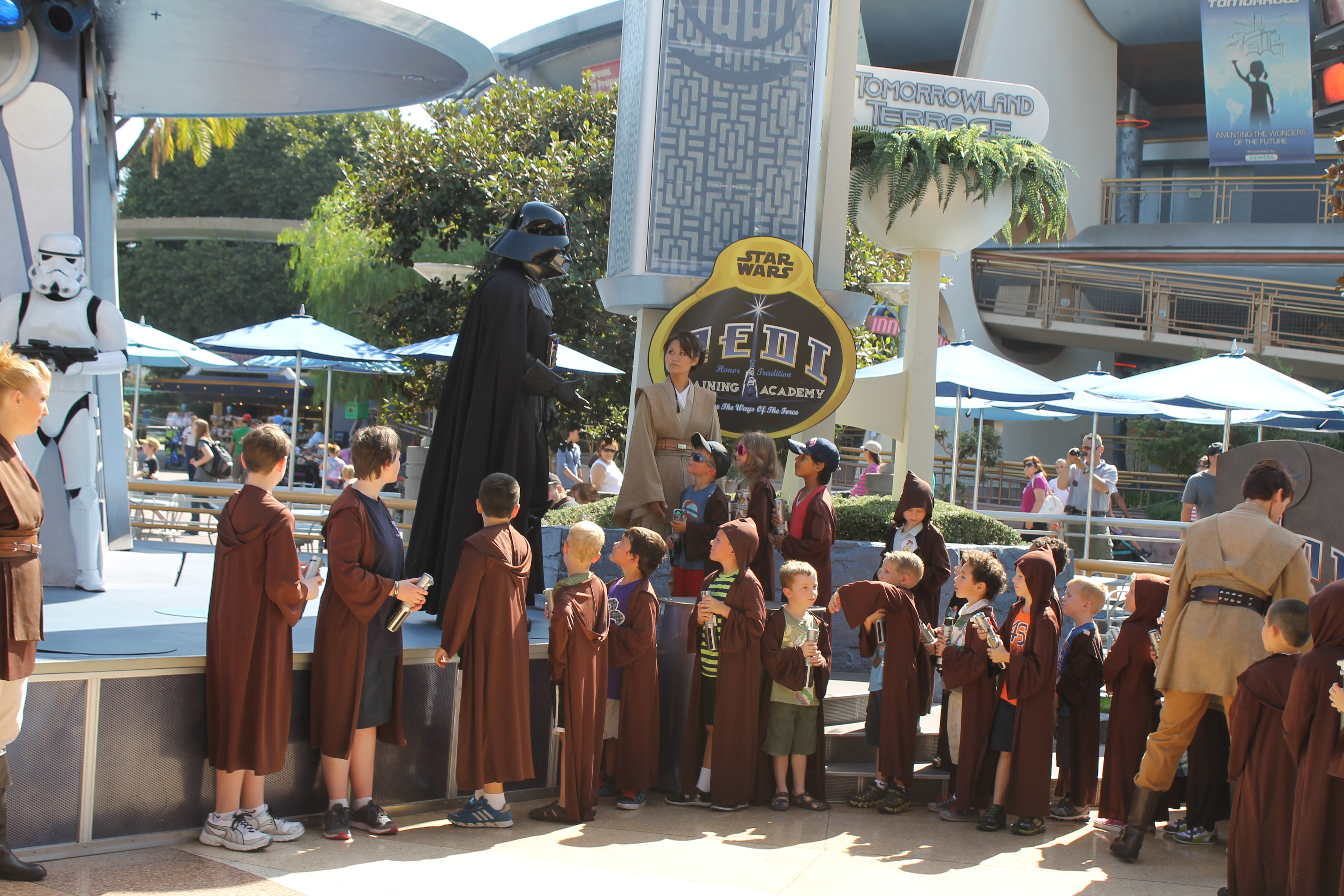 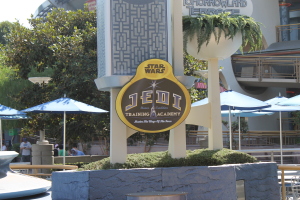 The Jedi Training Academy can be found at the Tomorrowland Terrace Stage.

One of my favorite things growing up was watching Star Wars. I’m a Sci-Fi nut and Star Wars was at the top of the list. I dreamed of being in Luke’s X-Wing making a run on the Death Star or flying along with Han and Chewie in the Millennium Falcon. I was a little jealous of D’land son when he wanted to go to the Jedi Training Academy at the Tomorrowland Terrace Stage. Ironically, his first visit to the Jedi Academy was the day that the Space Shuttle Endeavour flew over Disneyland.

At the Jedi Academy,  a Jedi master (along with other Jedi) will train young Padawans (students) in the ways of the force. The Jedi Training academy is for 4-12 year olds. We have, sometimes, noticed kids who are not 4 years old on the stage. This might be an exception to the rule, so don’t get upset if your 3 year old doesn’t get selected. The Padawans are selected early in the show, so be there early to get a spot for the selection process. The number selected is dependent on the show. Some shows take more than others depending on the amount of Jedi training. So, never tell me the odds!

DIVA TIP: Parents, if you want to get some great pictures/video of your children arrive REALLY early. Sit in the front row of the Tomorrowland Terrace so that you can use the wall for your camera/phone. 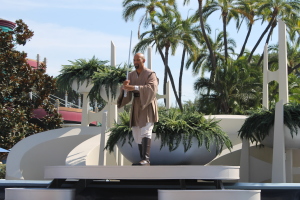 Getting selected is the ultimate goal for the selection process. Here are some tips on how to be selected:

1) Look excited, jump up and down, yell (introverts may struggle with this part)

4) Make a sign (Pick Me! I haven’t done this before! Jar Jar Who? My other car is an X-wing. I wrote Lightsabers for Dummies)

When your Padawan is selected, they will be taken to the side of the stage and given a Jedi robe and a “training” lightsaber. Each Padawan will be directed to their own “spot” on the ground. The Jedi Master will begin the training process after the last Padawan is selected. 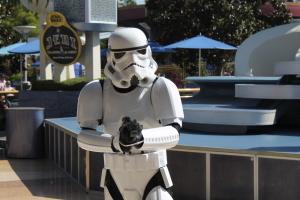 Perhaps you are the droid they are looking for?

Each Padawan will be instructed in how to use their lightsaber safely (too bad Jar Jar didn’t take this class). After receiving ample training there will be a great disturbance in the force. At this point, two Storm Troopers rush to the stage to secure the entrance of Darth Vader. Vader tries to turn the Padawans to the Dark Side of the Force. The Jedi Master reassures Vader that the Padawanas are strong in the force and they cannot be turned. Vader has one more surprise, Darth Maul appears from behind the stage and takes his place to fight the Padawans. Be careful, it’s a trap! The Jedi will direct the Padawans to two lines. The first line will fight Darth Maul on the lower level. Typically, the lower level is for the “older” Padawans. The stage level will be saved for the “younger” Padawanas and this is helpful for taking pictures for the smaller children. When they are finished the Padawans will be asked to return their Robe and training lightsaber before receiving a certificate for participation. 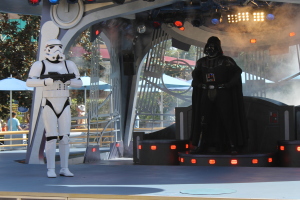 Vader enters! I recognized his foul stench as he entered!

On bad weather days (i.e. rain) the Jedi Training Academy might be shut down because the stages is slick. A park photographer once told us that the characters (Storm Troopers and Darth Vader) might come out for a meet and greet. If this happens, stop by Tomorrowland Terrace during a scheduled show and see if they are out greeting guests. If not, head to Space Mountain, Star Tours, or Buzz Lightyear Astro Blasters.

The Jedi Training academy is a must do activity for families who are Star Wars fans. If there was only a way that I could pass myself off as a 12 year old. I sense something… A presence I haven’t felt since… 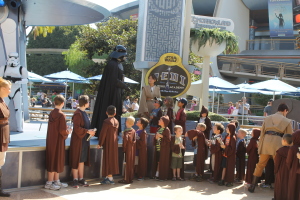 The Padawans are challenged to turn to the dark side.    Maybe they have cookies!

Remember the words of Yoda, “Always pass on what you have learned.” Leave us your best tip in the comments below!