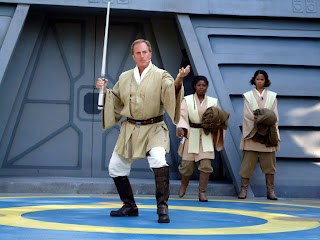 The Jedi Training Academy at Disney’s Hollywood Studios can be a lot of fun for children ages 4 to 12. Each 20 minute show will teach 12 Padawans, or Jedi Trainees, the lighsaber skills of the Jedi. During Star Wars Weekends, the number of Padawans increases to 30 per show. Beginning when the park opens, you can signup in front of the ABC Sound Studio. The queue is located across from the Star Tours stage and behind the face painting station near the glass doors. Signups are usually available until noon. (During Star Wars Weekends only, the signup window is very brief, usually from 9-10 AM and is located outside the Indiana Jones Stunt Spectacular.) Children are assigned a number and told to return for a particular show. Once each show has been filled, alternates are also assigned numbers. Children are asked to return 30 minutes prior to their assigned show. Shortly before each show, if there are any spots that haven’t been filled, alternates may be chosen. It is recommended that alternates check in 15-20 minutes before any show, and if there’s an opening, the lowest alternate number will get to be in the show. 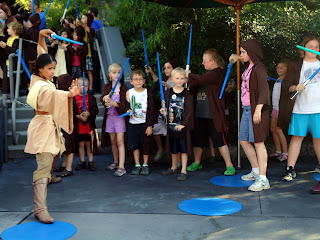 Before the show, each child is outfitted with a brown Jedi robe. The children are lined up and taken to the stage in front of the Star Tours ride, where they are given plastic lightsabers. A Jedi Master arrives and teaches the children a series of moves, repeating them, until everyone knows the order. Then, Darth Vader and his Stormtroopers arrive. Each Padawan has a chance to fight Darth Vader, one on one. Once each of the children has had a chance to battle Darth Vader under the watchful eyes of the Jedi Master, they work together to ward off Darth Vader with the power of the Force. The Dark Side is driven away, and each child is presented with a certificate declaring them an official Padawan.

Prior to the show, PhotoPass photographers hand special photopasses to each of the families. During the show, they take photos of all of the children who are participating, which are then added to the cards. After the show, you can take the special photopass to the Darkroom on Hollywood Boulevard where they will add the photos of your child to your regular photopass.

My niece loved being a part of the show and spend the next several days teaching everyone she could what she’d learned at the Jedi Training Academy. If your kids like Star Wars, either the movies or the cartoons, be sure to sign up for Jedi Training Academy. It is available 7 days a week at Hollywood Studios and shows occur twice per hour. So sign up early and enjoy!

As this is an outdoor show, it can be cancelled in inclement weather. This happened to my niece once, but the Cast Members offered a special photo session instead. We were taken into the handicapped access area for Star Tours and all of the children were lined up. A few minutes later, Darth Vader and two Storm Troopers walked in to take photos with each child. My niece, who was sporting pink Darth Maul facepaint, was very excited. We convinced here that she should give Darth Vader a hug. She ran up to him with her arms wide when it was her turn and Darth Vader stepped back and shook his head while the Stormtroopers shook their fingers. The Cast Member said, “There’s no hugging on the Dark Side!” My niece spent the rest of the day talking about it!