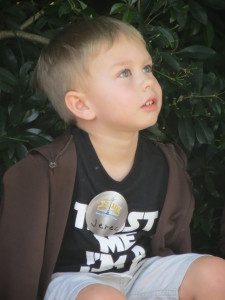 If your child/ children are Star Wars fans then this is a MUST for them. This was the most incredible experience for my youngest son. When we started talking about how he might be able to fight with Darth Vader on our next trip to Disney World, it was all he could talk about. I tried many times to let him know he may not be picked to do this but he told me he KNEW he would be. In fact the morning we were headed to Hollywood Studios he was up extra early and said he was so excited because he knew it was Star Wars Day. Of course I didn’t want to disappoint him, but I knew only a select number of children are picked for this show. (TIP: This is only for children ages 4-12) 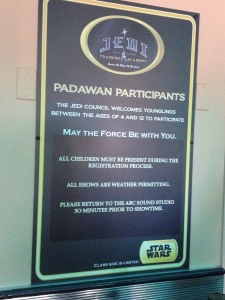 We got up earlier than we normally would for a Hollywood Studios day because I wanted to make sure we were at the park  long before it even opened. Unfortunately it was one of the days when the bus was running behind so I was only able to get there about 15 minutes before park opening. As soon as the park opened, I took my son and we ran towards the ABC Sounds Studio which is where you go to sign up for Jedi Training. (You must bring all children that want to be in the show with you to sign up because they ask them a few questions before they actually sign them up). There was already a line for sign ups but it wasn’t incredibly long so I was pretty sure my son was going to be able to participate in the show. We anxiously waited in line until it was our turn. A cast member then came over and asked my son a few questions, basically to see if he was able to listen and follow directions, then we proceeded to the sign in desk. Here they get the child’s name and they let you know what time slots still have an availability, which is nice so you can plan your Jedi Training around fast passes and dining reservations if possible. Once you get your time chosen you are given a piece of paper to bring back at your selected time. They ask that you return to ABC Sounds Studio 30 minutes prior to your show time. 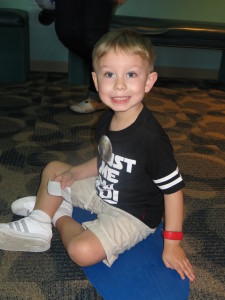 Once you return to the ABC Sounds Studio they ask your child to have a seat on a blue dot on the floor. Then a cast member comes out and gives instructions and  each child gets a button and a  Padawan robe to wear. There are normally 14 children per show so it is not too overwhelming for the children. After the instructions are over and the children are dressed they head to the stage, which is located next to the Star Tours ride. The parents are able to walk them over but once they get to the stage the parents must leave them. 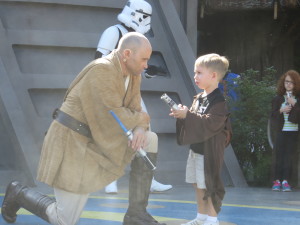 The children are told to find a blue dot on the stage and wait for instructions from their Jedi trainer. They are then given a light saber and instructed on the different moves they will be making when they fight Darth Vader. My son happened to be the youngest child on the stage and was so excited he seemed to forget  to listen but they worked with him and helped him get it right. After the Jedi training is over the Storm Troopers and Darth Vader come out on stage. This was a bit intimidating for my son. He was 3rd in line to fight Darth Vader but he was nervous so he went to the back of the line. Once he saw the other children fight he seemed to feel better and he did go fight Darth Vader. 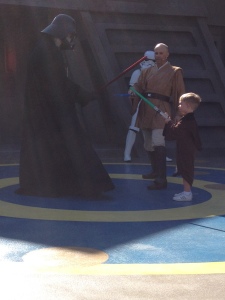 Once all the  children had fought Darth Vader the Jedi trainer had them all use The Force to make Darth Vader go away. They were then all brought up on stage for a round of applause and  each child  received a Jedi Training certificate. This was absolutely an amazing experience that I am sure none of those children will ever forget.

I was talking with the cast member when we returned to the ABC Sound Studio and asked him how quickly the spots were filled and he told me on a crowded day in less than an hour and a less crowded day usually in 90 minutes. If you really want to get your child/ children signed up you MUST be at the park before opening and head straight to ABC Sound Studio as quickly as you can. Keep in mind this show is also weather permitting. Good luck and May the Force Be With You!