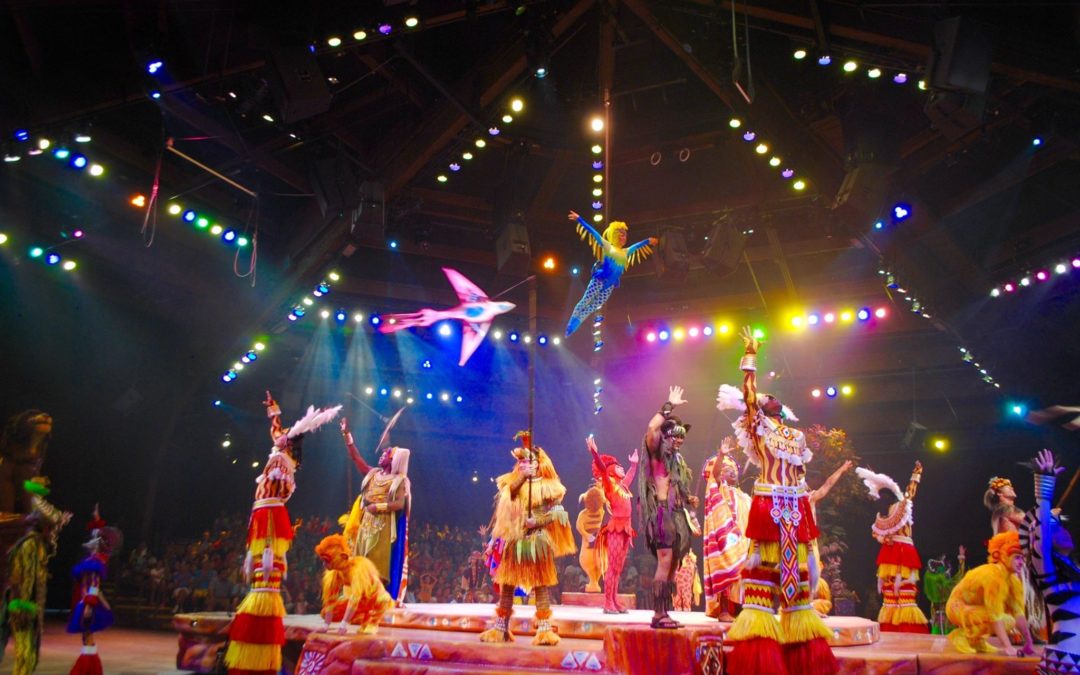 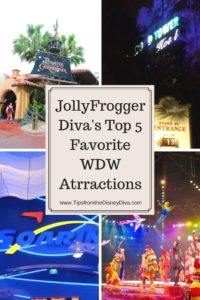 I recently did an article on my top 5 overrated attractions, so I wanted to counter that with my top 5 favorite attractions. I have been going to Walt Disney World since I was 9 and I definitely have a long list of must-do attractions every visit. It was much more difficult to narrow down my top 5 favorites because the list is actually much longer. Here they are in no particular order.

1) Festival of the Lion King 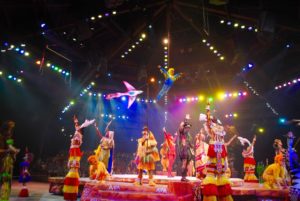 This is the only show my on my top 5 list, but Disney has several other wonderful stage shows at each park that I enjoy as well. I picked Festival of the Lion King simply because it’s my favorite stage show. The Lion King has always been one of my favorite Disney animated movies, and I was so excited when they created this show for Disney’s Animal Kingdom. It’s become such a favorite that I don’t think we’ve skipped it on a single trip since it opened. I love the immersive feeling you get from the theater the show happens all around you and makes you feel like you’re really part of the celebration. The performers really make the show something special however. There are 4 hosts and I feel like we almost always see the same 4 performers in that hosting role every year we visit. They all have incredible voices, and their singing is sure to give me chill bumps. In addition to vocalists, there are aerial performers (one of the birds and the Tumble Monkeys), dancers, and even a fire dancer. All of that talent in one little show leaves me on the edge of my seat the entire performance. It’s by far one of my favorite attractions at Walt Disney World, and you should definitely check it out on your next visit. If you don’t believe me, check out Why Wishes Diva Loves Festival of the Lion King here.

2) Pirates of the Caribbean 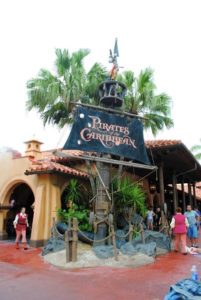 Pirates of the Caribbean was the first ride I ever rode at Walt Disney World besides the monorail. The first time I rode it, I actually ended up terrified. My parents forgot to mention the drop before the main part of the ride, and it scared me so bad I didn’t want to ride it again for a long while. I got past my fears, however, and now it’s one of my favorites. As my Diva name would suggest, I am a fan of all things pirate. I loved the ride before the movies, but I love it even more now that they have incorporated Captain Jack Sparrow. I love the ride so much that I made sure my husband and oldest daughter rode it as their first WDW ride, and I’ll do the same when we take my youngest daughter for the first time. I am less than enthusiastic at the changes being made to the Red Head scene, but I think that overall it will remain one of my favorites.

I’ll admit, I fancy myself a bit of an adrenaline junkie. Perhaps that’s why Tower of Terror is one of my favorite rides. The thrill of falling an unknown distance and an unknown number of times in the dark gives me a rush like no other ride at Disney can provide. My Dad and I have always shared a special love of this ride- we like to sit in the back so we can throw our hands in the air without obstructing anyone’s ride photo, and enjoy the screaming that fills the air when you inevitably end up on the ride with a group of teenage girls. Over the years, my husband and sister have become fans as well, so we usually have a whole row to ourselves. I was pregnant the last time we visited Walt Disney World and couldn’t ride Tower of Terror, and it was definitely odd skipping one of my favorite attractions. I just told my husband that I’ll have to ride a few extra times next visit, to make up for what I missed.

4) Carousel of Progress
This selection for my top 5 might be the least popular, but at least Soarin’ Diva shares my love. People seem to either really love or really dislike this attraction. I think a lot of people see it as a change to get off their feet and sit in the air conditioning for a while. It’s definitely good for that, but I actually really enjoy the show itself. I can’t specifically say whether it’s the catchy theme song or the lovable characters, but there’s just something I find very endearing about it.Maybe it’s the knowledge that Walt Disney himself developed the show and that it was one of his favorite attractions. I’ll admit that as a kid, I loathed being made to sit in a dark theater while I could be out riding rides, but as an adult I’ve really come to appreciate the attraction. I’m sure my girls will roll their eyes at me a few times over the years for wanting to ride Carousel of Progress every trip, but with it being 1 of my top 5 favorite attractions, they’ll just have to ride it and hope I don’t sing along too loudly!

5) Soarin’ Around the World 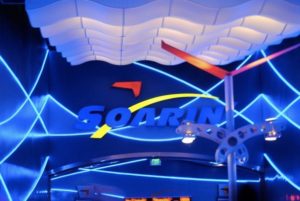 I have loved Soarin’ from day 1. I love the feeling of gliding over all sorts of beautiful places, feeling a cool breeze and smelling all kinds of wonderful scents. I love to listen to the soundtrack when I’m not at Disney World. I’ll close my eyes and imagine I’m back on that hang-glider.  I was sort of nervous when they switched the movie from “Soarin’ Over California” to “Soarin’ Around the World” but I found I loved the new movie as much as I did the old. I am partial to the soundtrack from the old movie, but I’m sure the new soundtrack will grow on me over the next couple of visits. Pink Diva shares her review of Soarin’ here.

Those are my top 5 favorite attractions at Walt Disney World. What are some of your favorite rides or shows? If you want to try any of my top 5 or create a top 5 list of your own, start planning your Walt Disney World vacation today! Click here to get a free quote from Patricia at  All 4 Dreams Travel.