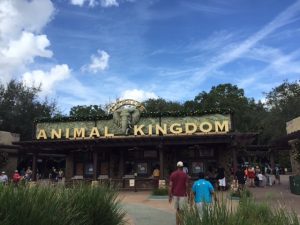 Kilimanjaro Safaris in Disney’s Animal Kingdom ranks way up on my list of favorite attractions anywhere.  I believe one of the best benefits of Animal Kingdom lengthening its operating hours is the ability to take a safari at various times of the day…makes viewing the largest variety of animals possible as no two adventures are ever the same.  Recently my family and I had the opportunity to spend a whopping 12 hours in this most-definitely-a-full-day-park and we rode Kilimanjaro THREE times, just so we could compare and contrast the advantages and draw-backs of various times of the day for you, dear readers. 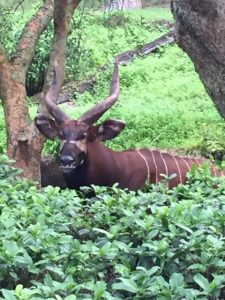 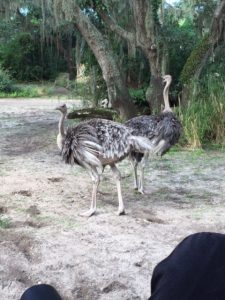 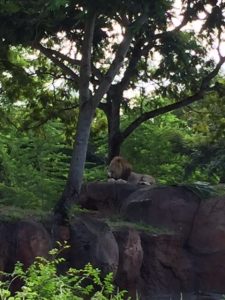 Morning:  To make sure we could get the earliest tour on Kilimanjaro Safaris, we started our day with breakfast at Tusker House.  Bellies full, we managed to be in the first vehicle leaving for the Harambe Wildlife Reserve that morning.  What we saw:  LOTS of active animals out and about – particularly a Bongo (usually hard to see “ghost of the forest”), three lions, a warthog, and some ostriches.  We also got a great look at the new African Painted Dogs! 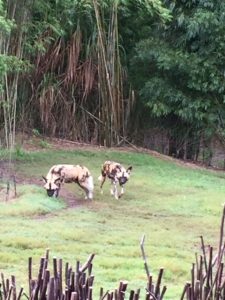 They were gorgeous and very easy to see well.  At this early hour we saw very few giraffes (I think we only saw one and at a great distance) and we did not see a single elephant.  Not one.

Noon:  We had a mid-day FastPass lined up for our second safari.  This time around, the animals were a bit less active.  Some of the ones we saw so easily in the morning like the Bongo, ostriches, lions, and warthog were either barely visible or missing altogether.  What we did see plenty of this time were both giraffes and elephants.  Let’s face it – giraffes and elephants are both awesome and crowd-pleasing.  Clearly the advantage of waiting until late morning/early afternoon is that you’ll see these two species in abundance. 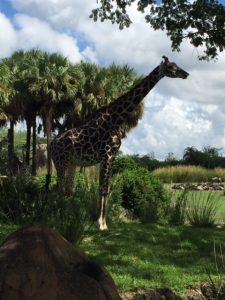 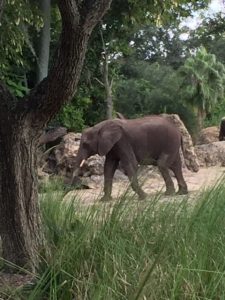 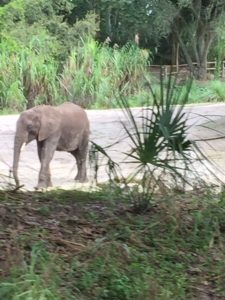 Night:  I was very excited to find out how this new opportunity would go!  The safari route is altered and some artificial lighting to simulate the setting sun is added to make animal viewing (somewhat) possible.  The African Painted Dogs are replaced after dark with some hyenas and those were the draw to me for this particular version of the attraction.  What we were expecting:  Cool sounds and animals moving about in ways different from earlier in the day.  What we saw:  Hardly anything.  It’s dark!  Even with the added lighting, the animals are hard to see and nearly impossible to photograph without special camera gear.  I was using my iPhone and I’m showing you the four best pictures I could manage.  We did see the hyenas, lions, and even a hippo out of the water walking around – all those things were very cool! 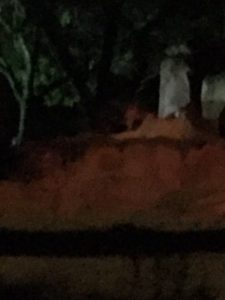 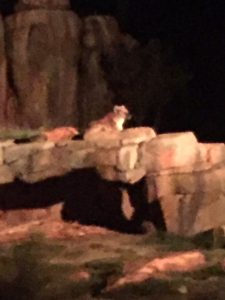 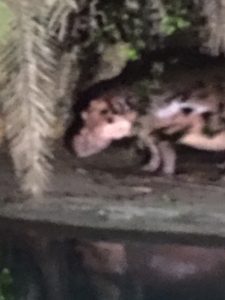 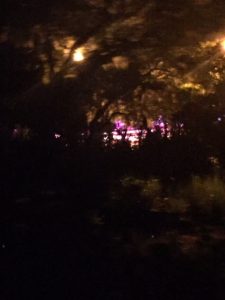 My best advice:  My suggestions are based on generalizations only – remember, this is an awesome attraction that is never the same twice.  In general, if there will be only one opportunity to try Kilimanjaro Safaris, choose mid-to-late-morning to see the most animals with giraffes and elephants pretty much guaranteed.  If you want to do this attraction more than once, add either the very early morning OR the nighttime version.  If you’re an enthusiastic photographer, plan ahead for low light after sunset.  Hopefully, knowing the pros and cons of the various times of the day will help you make the best decision for you and your travel group.  Until next time…Darlin’ Diva