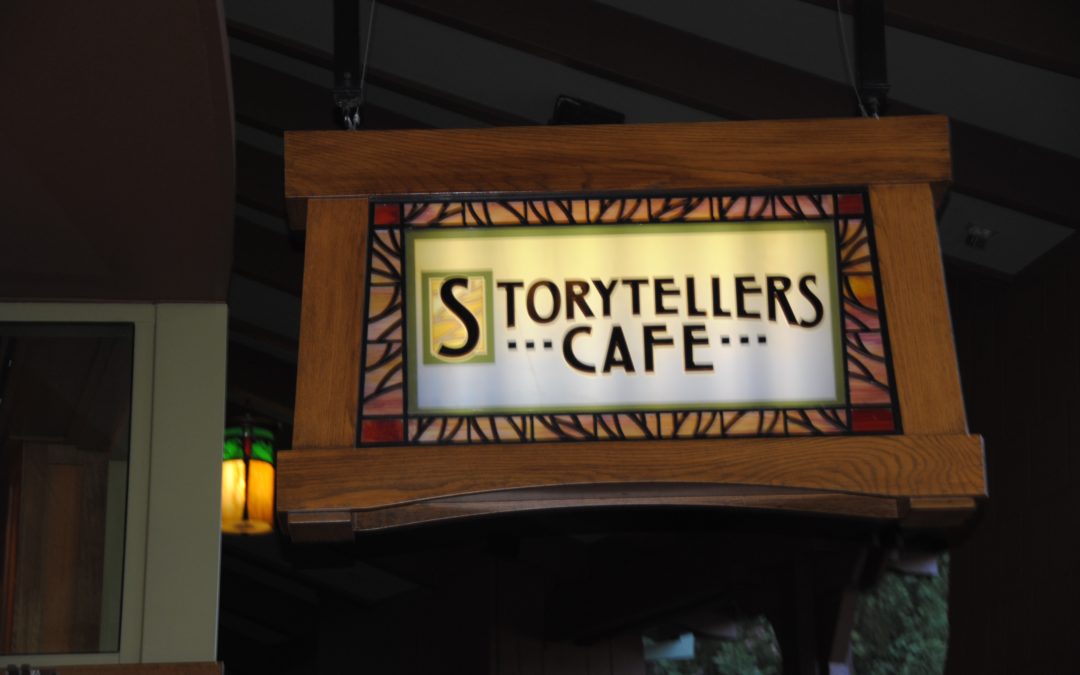 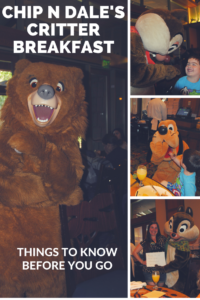 When picking out my family’s first character meal, there were all kinds of factors I considered while making my decision. To read how I came to that decision in picking the “best character meal” for our family, click here. But when the dust had settled and I had racked my brain comparing all of our options, I finally knew where we’d be eating: Storytellers Café.

Storyteller’s Café is located in the Grand Californian Hotel and Spa in Downtown Disney next to Anna and Elsa’s Boutique. This hotel is also unique in the sense that it directly connects you to California Adventure… you can’t get any closer than that. While the walk from the Downtown Disney can include a fair amount of walking to the actual café (not to mention countless turns and weaving through the resort), it is a beautiful resort to explore… just make sure you leave enough time to make your reservation. 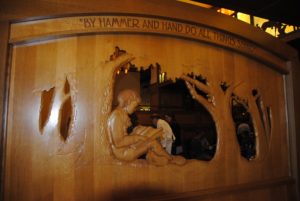 Note: While open all day long, Storytellers Café only offers a character meal for breakfast. The breakfast is “Chip N’ Dale’s Critter Breakfast”, which is served buffet style… A sample of the menu can be found here. While characters, menu items, and prices can change, as of our visit back in September 2016, children between the ages of 3-9 were $17 per person, and members in your party over the age of ten were $33 per person. This didn’t include tax or gratuity, so you’ll want to factor those in as well. Traveling with someone who is two or younger? Good news! They’re free, and still can eat and drink as much of whatever their tiny tummies will allow. Disney Diva Tip: Unlike Disney World, Disneyland does not offer a dining plan. Make sure you budget accordingly… and make sure you come with an appetite. No sense spending all of that money to only eat three bites and “be full”.

When we arrived inside Storytellers Café, we checked in with the hostess and were promptly led to our table. Right away we could see a couple of characters (Kenai and Dale) walking around in our section. As mentioned before, we went in September during Disneyland’s “off season”. Although we had made reservations in advance (Disneyland dining reservations can be made up to 60 days in advance), we were still able to adjust the time, date, and number in our party multiple times that week as our plans changed, and there were still plenty of reservation slots available for the Friday morning we went. However, if you are going during “the busy season” such as the holidays or summer vacation, you may have a tougher time making a reservation. Disney Diva Tip: When planning your trip, it’s best to make a reservation for whatever day and time you think will work best for your family, and if you’re travelling with a large group, give them the largest number of potential guests. It’s a lot easier to “downsize” a reservation than have to worry about scrambling last minute to add people to your table. Just remember, if there are cancellations in your group, make sure you call with enough notice to avoid the $10 per person cancellation fee. 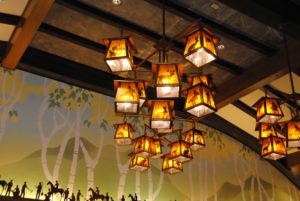 Like most everything at the Grand Californian, the theme is a very rustic, cabin-like atmosphere. There are wood carvings throughout the Storytellers Cafe, and the light fixtures highlight silhouettes of woodland creatures, and the various pieces of artwork displayed around the walls make you feel like you’ve stepped back in time to California’s pioneer and gold mining days. 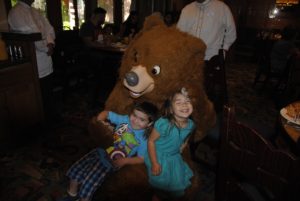 On the particular day we went, the characters walking around were Kenai, Chip, Dale, and Pluto. I was a little disappointed because I had partially chosen this restaurant for the chance to see rare characters, and I knew that Meeko, Koda, and occasionally other “rare” characters make their appearance. While I knew Chip and Dale would be two of the characters we saw (any character mentioned in the title of the character meal will always make an appearance), the only “rare character” we saw was Kenai. However, my family and I had never had a meet and greet with him before, so at least we got to add him to our list of “new characters we’ve met”. 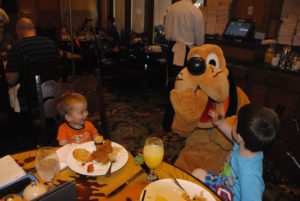 As far as interacting with the characters, depending on how busy the restaurant is will determine how frequently they come to your table. We were lucky in the sense that Dale came by our table 3 times, Pluto and Kenai came by our table twice, and Chip came by our table once. During this time, my kids got lots of hugs, pictures, and interaction with all of the characters. And while Chip only came to our table once, Chip also noticed that I was pregnant, and made sure to make a big deal out of my baby bump, taking several pictures and rubbing my stomach numerous times. While not all guests may appreciate this, I did, and it made for some great photos highlighting my little mouseketeer’s first trip to Disneyland…. Even if it was in utero. 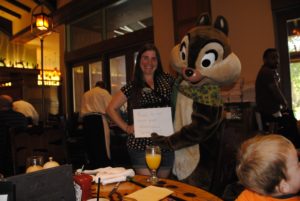 One downside of choosing Storytellers Café for their character breakfast, is this is the only character meal at Disneyland that does not have a Disney Photopass photographer. This isn’t a complete deal breaker since you can still take as many photos as you’d like with your own camera or phone, and most cast members are very willing to take pictures of your entire party for you, however, just be aware, that if this is something you were looking forward to, or if you were trying to make the most of your Disney Photopass One Day or Photopass One Week package, unfortunately, you will not be able to do so here. 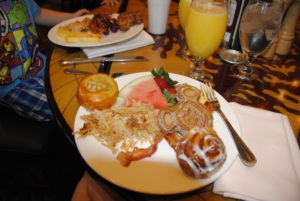 We had mixed reviews about this matter. I enjoyed the food (I ended up eating four plates worth… hey, I’m eating for two and I made sure to bring my appetite), but honestly, I don’t think it was any better than some other breakfasts I’ve had at other resorts (and most of those were complimentary)! My husband wasn’t really impressed with the menu at all… particularly when you considered the cost of the character meal. Again, the food was good… it wasn’t terrible, but it probably wasn’t worth the price tag. Though if you’re going to a character meal, you’re probably going more for the characters and interactions… enjoying your meal is just an added bonus. Our three kids did enjoy their plates, but seeing as all of my children are young (and don’t have large appetites), this was something that we probably could’ve waited a few more years on if we were going “for the food”. But again, because we had small children and our primary goal was more “for the characters”, it was still worth doing.

Our experience wasn’t entirely eating and meeting characters however. In addition to going back for numerous plates of food and posing with some of our favorite furry friends, we also were led in a couple song and dance numbers throughout the course of our meal. 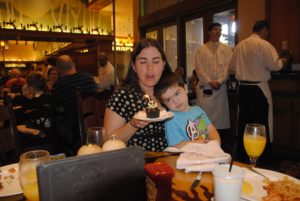 The cast members we interacted with were all very friendly, and for the most part, kept our plates cleared and our drinks refilled. I don’t know if I’d say they went above and beyond, but they did their jobs well, and we didn’t have complaints. Disney Diva Tip: If someone in your group is celebrating something, you definitely want to speak up. I recommend including this information in your reservations. Because we were celebrating my birthday during our trip, I had a “Happy Birthday” pin waiting for me at our table, and our waiter brought me out a cupcake (which in my opinion, is never to early to eat) and had my family serenade me to the tune of “Happy Birthday”.