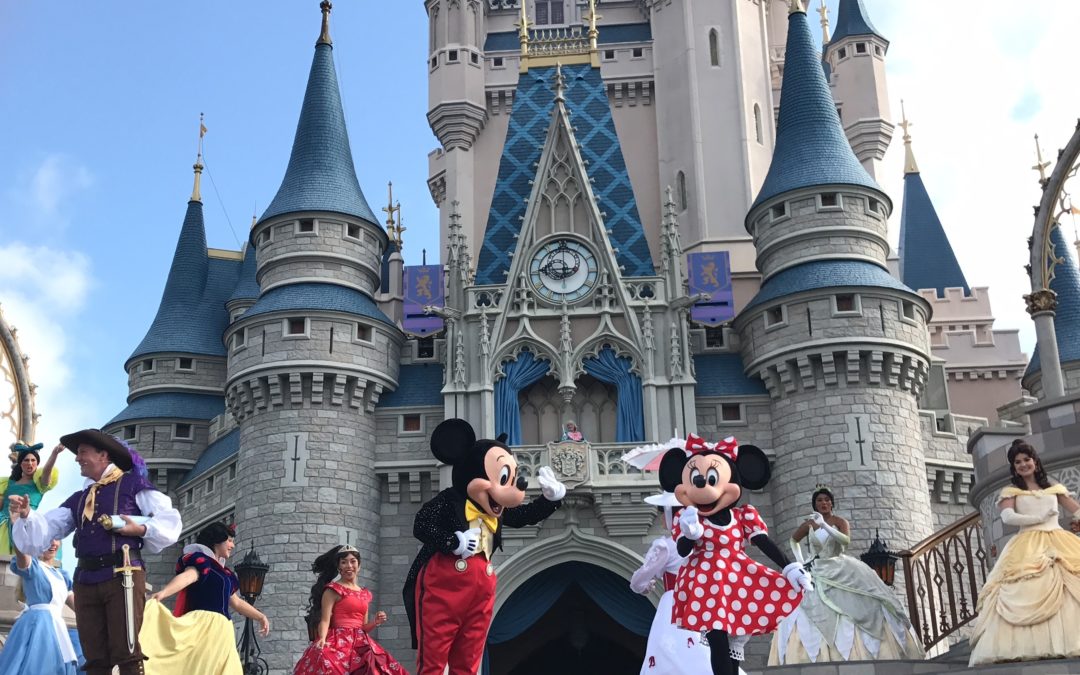 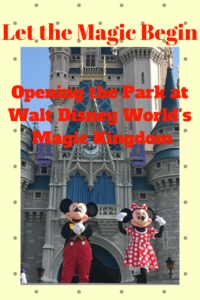 It’s been almost a year since Walt Disney World Resort changed the way the Magic Kingdom begins the day. Among Disney fans, the debate still rages as to which is better – The Magic Kingdom Welcome Show which occurred at the train station, or Let the Magic Begin performed each morning on the Cinderella Castle stage. Let’s compare!

For years, guests visiting the Magic Kingdom could begin their day with The Magic Kingdom Welcome Show at the train station. After going through security and scanning their magic bands, guests would wait in the plaza area outside the park in front of the train station.  About 15 minutes before the park was scheduled to open, the show would begin. The Mayor of Main Street, U.S.A. (or sometimes Smoky, the Fire Chief) would appear on the train platform, high above all the guests waiting on the plaza, and welcome everyone. Performers dressed in Main Street U.S.A, turn-of-the-century-inspired attire would sing songs such as “Good Morning” and “Zip-A-Dee-Doo-Dah.” Eventually, the train would pull into the station, filled with classic Disney characters, and the First Family would be introduced. My daughter’s family was lucky enough to be chosen First Family once, and it was an experience filled with endless magic! 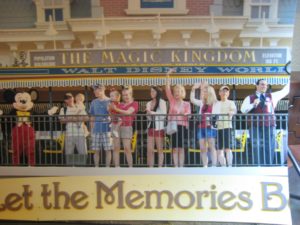 Soarin’ Diva’s family was also pixie-dusted with this unforgettable opportunity, and she shared her experience here.  Everyone would count-down to the opening, fireworks would go off, and then guests would be on their way – through the tunnels under the train station and down Main Street, U.S.A. to begin their magical day.  You can watch a video of it here.

The Magic Kingdom Welcome Show was loved for years. It built excitement for your day as you waited for the show to begin and the train, filled with Disney characters, to pull into the depot.  Guests occupied their time waiting for the park to open by planning their itinerary for the day, posing for photos, or, perhaps, just chatting!  During peak seasons it could get a little crowded, with everyone jammed into a relatively small area.  But arriving early always meant you had the chance to be chosen First Family – and definitely the chance to enjoy several attractions before the park became overly crowded. (Read my article about “Rope Drop” here.)

In January 2017, Walt Disney World Resort changed the way the park was opened. The Magic Kingdom Welcome Show was replaced with Let the Magic Begin, which is performed on the stage of Cinderella Castle.  At the time, the Walt Disney World Railroad was down for refurbishment and there was speculation The Magic Kingdom Welcome Show would return when the railroad returned.  But that was not to be.

Let the Magic Begin is a much shorter performance (about 5 minutes) but still a very fun way to begin the day! Admist a fanfare of trumpets, the Royal Herald appears and invites everyone to gather around.  He unfurls a scroll and reads the proclamation which declares that everyone is welcome in this happy place. The Royal Herald then welcomes Mickey Mouse to the stage, and soon a procession of your most beloved characters appears on stage to welcome everyone to the park.  Although there are no vocal performances like there had been with the show at the train station, an instrumental version of “Zip A Dee Doo Dah” plays while the characters parade on stage.  Once all the characters have appeared, draperies on the castle balcony open and Fairy Godmother makes an appearance to help create some magic. She invites everyone to help her recite the magic words, “Bibbidi, Bobbidi, Boo!” then fireworks go off, and the day begins.

Diva Tip: Stay for the very end of the performance to see a sweet moment between Mickey and Minnie!

Here’s a video of the entire show:

The area in front of Cinderella Castle is much bigger, of course, than that in front of the train station, so it is easier to see the show. And, since guests are allowed into the park about an hour before park opening, there isn’t the long wait in a confined area like there was with the show at the train depot. You can enter the park, do some shopping, grab a coffee at Starbucks or some breakfast at the Plaza, and relax, with room to move, at the hub.  Crowded in the plaza area in front of the park didn’t offer such luxuries.

When The Magic Kingdom Welcome Show was performed at the train station, savvy guests would try to get pre-park opening breakfast reservations so they could enter the park and get some coveted “empty park” photos. With the change in opening procedures, this tip isn’t as useful since everyone has early access to the park, whether you have an early morning breakfast reservation or not. You can still try to be first in the park and hurry down to the hub to snap some photos before most people make their way to the stage, but it’s not quite as easy as it used to be.

Diva Tip: There is still an option to purchase tickets to Disney Early Morning Magic which allows you access to a limited number of attractions in Fantasyland and breakfast at Pinocchio Village Haus.  This is NOT the same as Extra Magic Hours which allows Disney resort guests early access to the park on certain days.

So which is your favorite? Do you miss The Magic Kingdom Welcome Show at the train station? Do you prefer Let the Magic Begin so you can enter the park early and leisurely make your way down Main Street, U.S.A while waiting for the park to open?  We’d love to hear your opinions in the comments below!

And if you haven’t had a chance to see Let the Magic Begin, why not contact Patricia at All for Dreams Travel today? She can help you plan a magical vacation, and her services are FREE!!!  Click here for a quote today and let the magic begin!