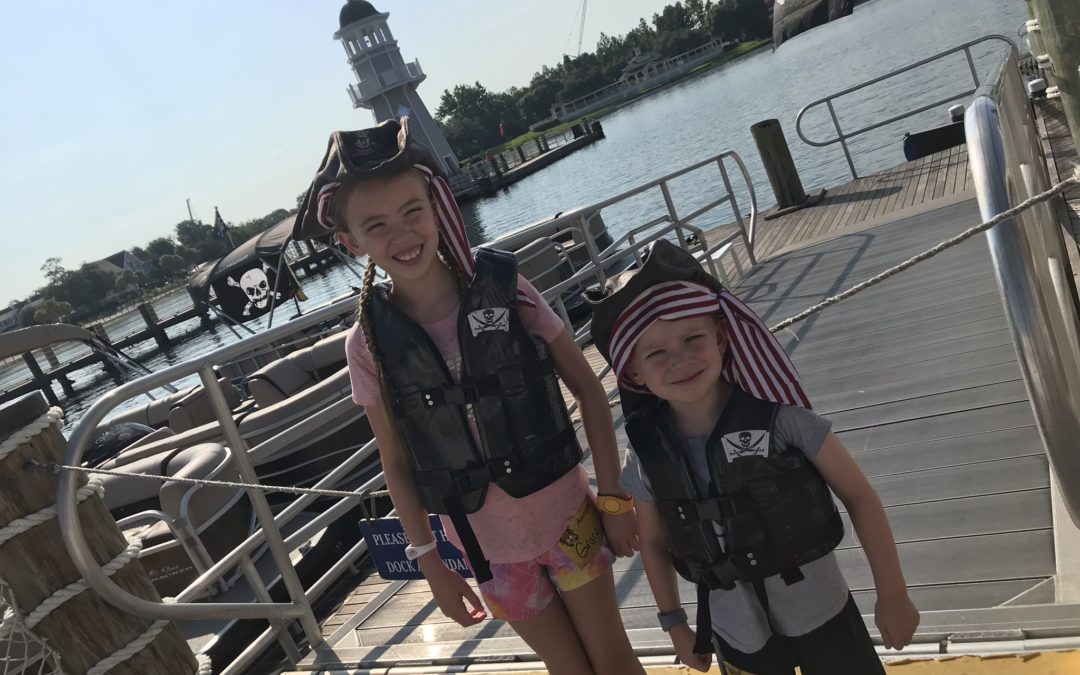 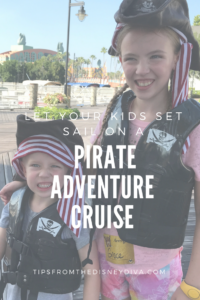 Ahoy mateys!  Get ready for a kid-sized adventure sure to please all the little scallywags in your crew!  Did you know Walt Disney World Resort offers real pirate treasure hunts, just for kids?  My grandchildren set sail on this adventure and came back with more loot than Captain Jack! 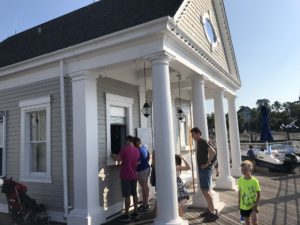 We arrived at Bayside Marina a little before 9:15 am. (The cruise is from 9:30-11:30 am on Mondays, Wednesdays and Fridays.)  We checked in, and the kids were fitted with special pirate life-jackets.  But that’s not all!  They were also both presented with an official pirate hat to keep! They were absolutely adorable in their pirate attire, and ready to set sail on their treasure hunt.

The ship they sailed on was really a pontoon boat.  Maybe it wasn’t especially “pirate-y,” but at least the canopy provided some shade from the blazing Florida sun. 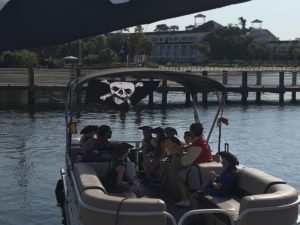 Diva Tip:  Even with the canopy, it’s a good idea to make sure your pirates are protected with sunscreen while on the high seas!  And although they had a bathroom break, prepared pirates use the facilities before boarding.

It was good to know the ship was stocked with everything a pirate needs for a morning of pillaging and plundering – cool drinks and snacks!  Just to be sure no other ships would try to encroach on their quest for treasure, a Skull and Crossbones flag proudly flew from the stern of the ship.  The Captain instructed his crew that whenever they passed another vessel out on the water, they were to raise their fists, make a “hook” shape with their fingers, and shout, “ARRRGH!”  That ought to keep potential thieves away!

Once they were out on the sea (eh..Cresent Lake), their search for treasure began.  As all good pirates know, you need some clues to find a treasure.  So, the first clue was revealed, and soon they were off in search of more clues, which would eventually lead them to treasure.  According to my little pirates, some of the clues were on land, and they had to get off their ship to find them.  They sailed over to Epcot and searched near the Germany Pavilion.  At one point, they also disembarked by Disney’s BoardWalk Inn.  Having a chance to get off the boat from time to time seems like an excellent idea since two hours non-stop on the water may be a bit much for little ones who might not quite have their sea-legs. 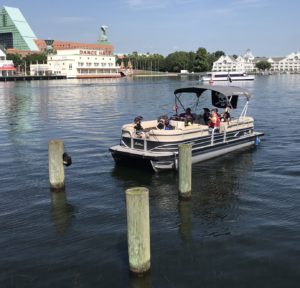 See the bag hanging on the piling?

Some of the clues were also found on the sea.  My husband and I had decided to stroll over to BoardWalk Bakery for some of our own morning treasure (aka coffee) while our pirates were seeking their bounty, and while we lingered at our table outside the bakery we saw their ship sailing toward some pilings near the dock.  As they approached the piling, we noticed a black bag attached to it.  We watched with intrigue as they pulled up alongside, grabbed the bag, opened it to squeals of delight, then took off again toward their next stop.  It was clear they were all having an unforgettable time and were enjoying their search for treasure. 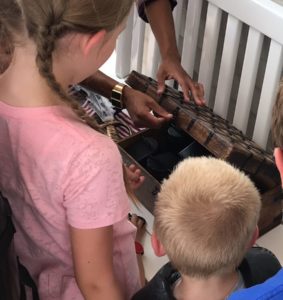 Around 11:20 we arrived back at Bayside Marina to greet our pirates as they returned from their adventure. Although the boat had not yet arrived, it was clear the cast members (eh…pirate crew) on shore were also going to be part of the story.  We saw a cast member dressed as the pirate “Stinky Feet” tormenting and shouting to our treasure-seekers as they approached the shore.  They were shouting back at Stinky Feet, and it seemed a race was on for the treasure.

Diva Tip:  If you want a great photo spot to capture all the action as the ship heads back to shore, stand by the jet-ski in the corner of the deck which overlooks the dock. The treasure chest just may be hidden in that jet-ski! 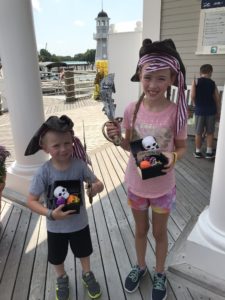 Luckily, Stinky Feet was scared off by our little pirates, and they made it to shore where they finally found the treasure chest!  Inside the chest were smaller treasure boxes, each one filled with loot for our pirates to keep.

The kids said they really enjoyed this adventure, and it is a true value.  Priced at $39 per child for a 2-hour fun-filled adventure their morning included snacks, drinks, a pirate hat (which we saw later at the Pirates of the Caribbean gift shop for $24.99), a plastic sword, and a treasure chest jammed-packed with loot!  There were nine children on the adventure along with two cast members who sailed on the boat and several others who participated onshore.

If you’re looking for something fun for your little scallywags to do on a non-park day, I would absolutely recommend this adventure.  Our grandkids (ages 5 and 10) absolutely loved it and have already asked to go again!  After watching them, next time I may try to sneak on board too! 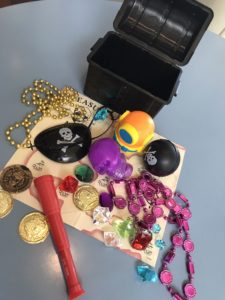 Look at all that treasure!

If you’d like to book a Pirate Adventure Cruise for your favorite pirate, or maybe an entire Walt Disney World vacation, just contact Patricia at All for Dreams Travel.  She will arrange everything you need for a perfect adventure, and not even touch your treasure chest!