Light Up Your Night with an IllumiNations Dining Package 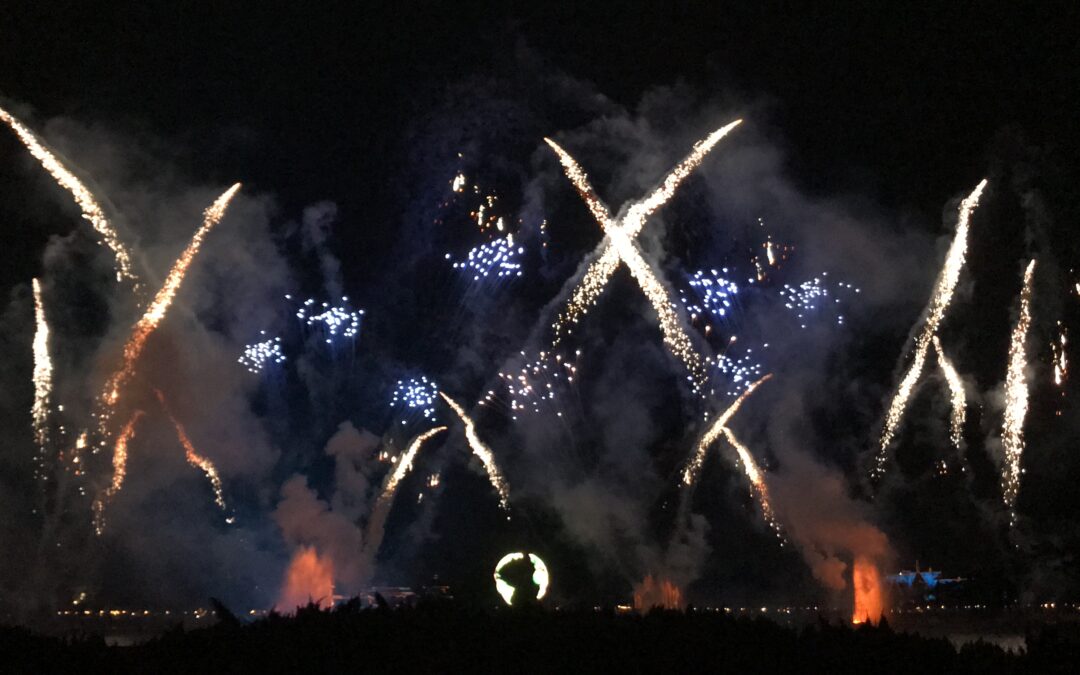 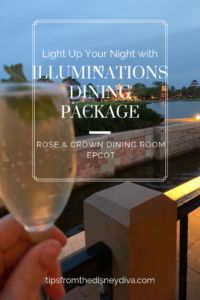 It’s been part of Walt Disney World for a generation of mouseketeers.  Originally debuting on January 30, 1988, “IllumiNations” has undergone some tweaks over the years (“IllumiNations25” for the 25thanniversary of Walt Disney World Resort and “IllumiNations 2000: Reflections of Earth” to welcome the new millennium) but, in some form, it’s always been there.  Just like Mickey, you could depend on seeing this 12-minute nighttime spectacular of lasers, lights, and fireworks whenever you visited Epcot.

But as Walt was fond of saying, at Disney “we keep moving forward—opening up new doors and doing new things….” So on September 30, 2019 Epcot will say goodbye to “IllumiNations: Reflections of Earth” and the very next day, October 1, 2019, will premiere a new nighttime show “Epcot Forever.” (“Epcot Forever” is a limited-time show featuring music, lasers, lights and special effect kites.  It will be the nighttime show until sometime in 2020.)

Probably my most memorable viewing of “IllumiNations” was on December 31, 1999 when it was known as “IllumiNations 2000: Reflections of Earth.” My family spent hours that day staking out a bench by the lagoon so we could welcome the new millennium watching the fireworks. (Read about it, here.) Since then, we’ve seen “lllumiNations” when we can, but frankly it hasn’t been very often.  We’re more likely to be at Magic Kingdom for late evenings, or back at the resort tucking the grandkids into bed.

When we heard “IllumiNations: Reflections of Earth” was ending, we knew we wanted a chance to once more see this iconic, one-of-a-kind show.  What better way, we thought, than with a VIP lagoon-side table while enjoying a scrumptious meal!  Faster than a laser, we booked the IllumiNations Dining Package.

Unlike other Disney nighttime show dining packages, the IllumiNations Dining Package is only available for Rose & Crown Dining Room in the United Kingdom Pavilion.  We were thrilled to be able to dine here again – it’s one of our favorite table service restaurants in World Showcase.

We arrived at Rose & Crown a few minutes before the check-in time of 8:00 pm.

Diva Tip: You don’t need to go into the Dining Room to check in – there is a podium outside the entrance.  Just stop by there and let the cast member know you are here for the IllumiNations Dining Package. 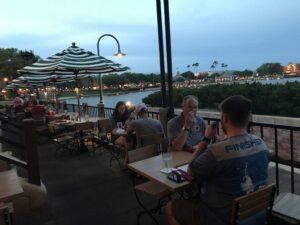 Since we were a little early, we were asked to wait, but soon were escorted to the patio which overlooks the lagoon.  We had a lovely table right next to the shore, but there was a narrow island of landscaping (a water break wall, I assume) immediately in front of the patio. While it didn’t preclude our view completely, I do wish the shrubs had been trimmed down a little more.

Our server promptly brought us the prix-fixe menu.  We could choose an appetizer, entrée, and dessert, plus alcoholic or non-alcoholic beverages.  Since it was a warm evening, we all passed on the choice of potato leek soup as an appetizer. My husband and I chose the United Kingdom Cheese Platter (a selection of traditional British cheeses and accompaniments) and my son chose the Scotch Egg (golden-fried hard-boiled cage-free egg wrapped in sausage with mustard sauce). I also ordered the featured alcoholic beverage, Sparkling Duchess (Prosecco and St-Germain Elderflower liqueur topped with a splash of ginger ale garnished with fresh mint) (It seemed appropriate to toast a farewell to “IllumiNations!”) and my son tried a Strongbow Cider.

The cheeses were delightful – a nice variety of flavors and the accompaniments were the perfect choice to enhance each bite.  My son said the Scotch Egg was an excellent choice and commented the fried exterior was light but added texture to the hard-boiled egg. 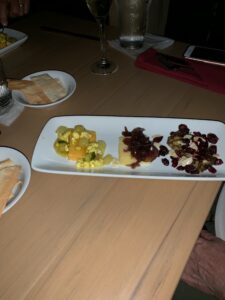 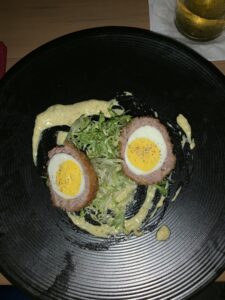 Our drinks were wonderful! The Prosecco was definitely evident in the Sparkling Duchess, with the ginger and mint barely noticeable.  The Strongbow Cider is my son’s personal favorite cider – light and drinkable with a crisp aftertaste. He also tried the Bumblebee – a pub blend of half Guinness and half Boddingtons.  It was extremely heavy he said, but an excellent choice if you’re looking for something British.  He also has not seen it as a choice at our local pubs, so it was fun trying something he can’t get at home. 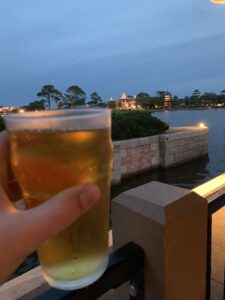 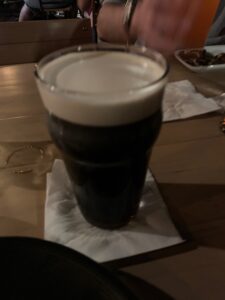 For entrees, my husband chose a classic dish at Rose & Crown Dining Room – Corned Beef and Cabbage (traditional Irish-braised corned beef with steamed cabbage, carrots and red potatoes served with a stone-ground mustard sauce).   He couldn’t have been happier.  He’s had this dish on previous trips but commented how he had forgotten how absolutely delicious it was. 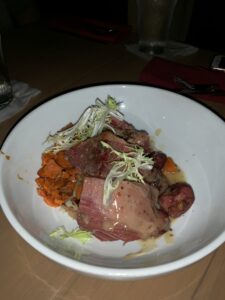 My son wanted to try something different, so he opted for Bangers and Mash (traditional English sausage with colcannon potatoes, roasted mushrooms, caramelized onion jam and red wine demi). He said it was delicious, but extremely heavy and filling.  The potatoes could have used a little more flavor (butter, salt or chives) for his taste. 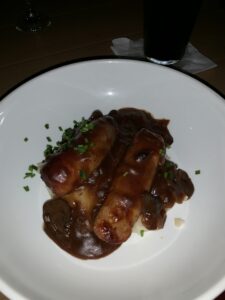 I chose Rose & Crown’s signature dish – Fish and Chips (beer-battered and served with house-made tartar sauce).  Frankly, I was a little disappointed. The fish was mushy, and the coating, while crispy, was a little too greasy.  I’ve also had this before, and have enjoyed it, so maybe the kitchen just wasn’t having its best night. 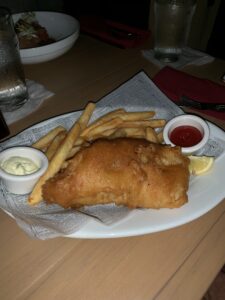 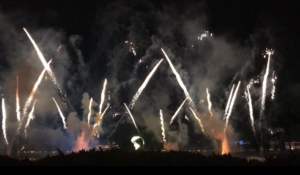 By the time we were finishing the entrees, “IllumiNations: Reflections of Earth” was set to begin.  Our server was very respectful during the show and didn’t disturb us so we could fully enjoy the laser and fireworks spectacular.  It certainly was a prime viewing location – we had an (almost) unencumbered (those overgrown hedges!) view of the show, a very comfortable seat, a full stomach, and a lovely drink. I purposefully tried to soak in every moment of the 12 minutes, reminding myself this may very well be the last time I saw the show. 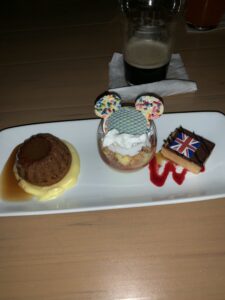 When it was over, our server returned with our dessert – a Pudding Platter (a trio of Rose & Crown Favorites featuring Sticky Toffee Pudding, English Trifle, and Chocolate Nougat Bar). She also made it a point to say we were welcome to linger as long as we wanted and offered to bring us more drinks. It was a pleasant way to finish our evening, although the puddings were nothing I’d care to order again since, for me, they didn’t have any remarkable flavor.  My husband and son, though, thought they were delicious.

The IllumiNations Dining Package is $85 per person ($35 for children 3-9), including tax and gratuity, and valid theme park admission is required. The IllumiNations Dining Package does NOT qualify for the Disney Dining Plan, although other meals at Rose & Crown Dining Room are included on the dining plan. Reservations are highly encouraged – the patio area is very small and given the approaching end of “IllumiNations: Reflections of Earth” the show is certain to draw big crowds.  The patio area is not covered so in the event of inclement weather, you will be relocated to a covered outdoor area.

If you want to catch “IllumiNations: Reflections of Earth” one last time before it ends, this is a fabulous way to say farewell. Having an up-close seat at water’s edge made the show even more beautiful.  We enjoyed a great meal and relaxed as we enjoyed this stunning nighttime spectacular and reminisced about all the previous times we have seen “IllumiNations” in all its forms.

If you’re ready to say goodbye in fashion, let Patricia at All for Dreams Travel help you plan the perfect visit!  She can make all the arrangements, and you just need to enjoy the show!