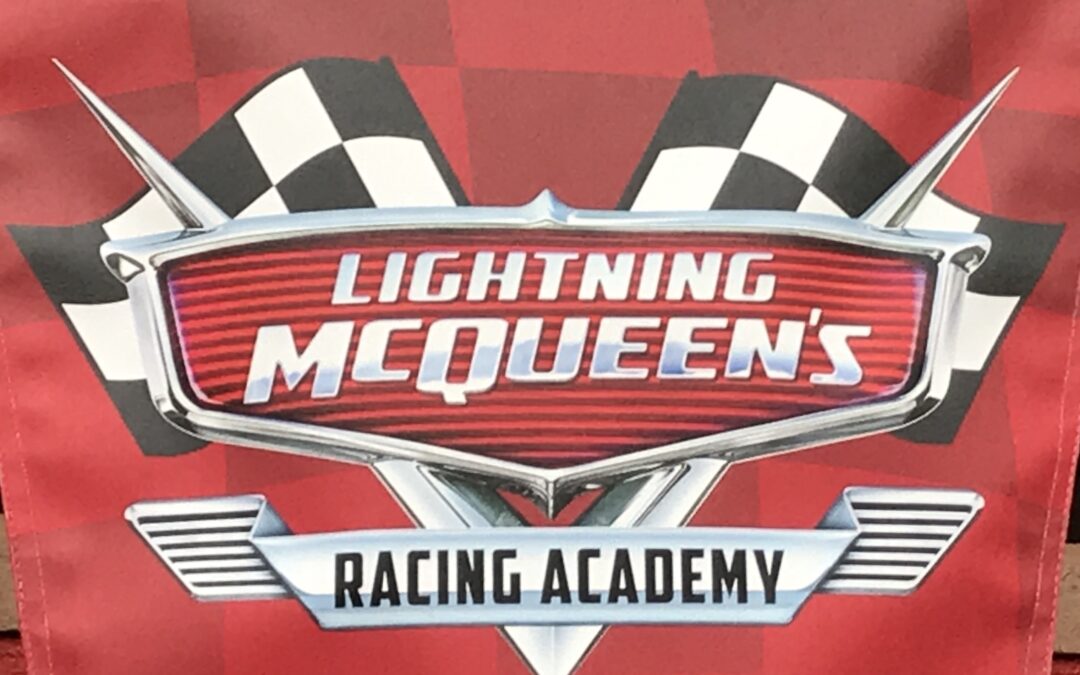 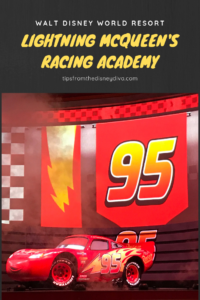 There’s a new racing champion in town at Disney’s Hollywood Studios! Lightning McQueen’s Racing Academy is now open, and it’s a delightful show sure to make you shout “Ka-Chow!”

Located in the Cars Courtyard at Sunset Showcase (just beyond Rockin’ Rollercoaster), Lightning McQueen’s Racing Academy is an indoor, entertaining show for the entire family.  The theater has bench-style seating in a semi-circular formation surrounding a raised stage. The walls have giant screens which project all the action, so everyone can easily see the show. No video or flash photography is allowed.

During a brief pre-show Sally and Mack, Lightning McQueen’s personal driver, host a trivia game. The audience is invited to come on in, find a parking spot, and turn off our engines. As Mack and Sally ask trivia questions, the rookie racers are invited to shout out answers.  Note, though, this pre-show is done through off-stage voice-overs.  Sally and Mack do not appear onstage.

Diva Tip: If you want to do well at the trivia game, be sure to brush up on your Cars knowledge.  Many of the questions come from references to the original movie! 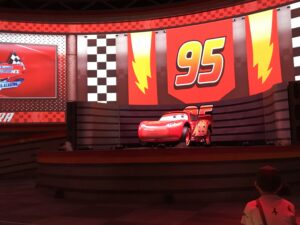 After this quick introduction, Lightning McQueen rolls onstage and welcomes everyone to his Racing Academy.  He reminds us Doc Hudson taught him everything he needs to know and now he’s formed this Academy to pass on his knowledge to future racers.

Although he acknowledges he doesn’t have a great history of performing well in simulators, McQueen says he’s going to use a simulator to help teach racers at his Academy.  The screens along the wall project all the simulations, so everyone in the theater can feel like they are part of the action. 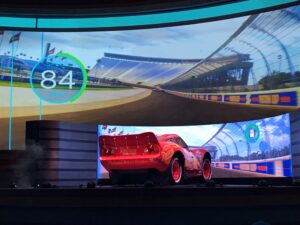 After a couple of simulations, Chick Hicks hacks into the simulator and takes control.  He tells Lightning McQueen that he wants to race again to prove once-and-for-all he is the racing champion.  Lightning McQueen reluctantly agrees, and the race begins.

Naturally, Chick Hicks doesn’t play fair, and causes some mischief.  This time though, Cruz Ramirez is able to counteract Chick Hicks’ foul play, and switches the simulator to Team Mode.

With the help of his friends, Lightning McQueen is victorious!  He reminds us racing is not about flash, speed, and the finish line.  It’s about the journey to get there and who’s beside you.

The show is upbeat, fun, and a wonderful addition to Hollywood Studios.  It obviously appeals to younger children but has a few hilarious lines that only adults will understand.  At around 12 minutes, it’s not too long to have kiddos sit, but long enough for a nice air-conditioned break. 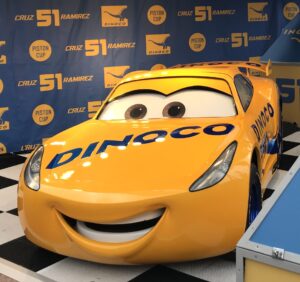 Outside the building, you can say hello to Cruz Ramirez and DJ, the ultimate party car from Route 66, at DJ’s Ready! Set! Party Time! Cruz and DJ are both available for photos, although we didn’t see a PhotoPass photographer on duty.  There’s plenty of high-energy dance music going on, so it’s a great place to work off some energy.

The cars themselves will look very familiar if you’ve ever been to Cars Land at Disneyland’s California Adventure. Radiator Springs  at Disneyland is a must do for any Cars fan, and now it’s so exciting to finally have more Cars related activities for guests at Walt Disney World Resort.

Next time you are in Disney’s Hollywood Studios, I’d recommend racing over to Lightning McQueen’s Racing Academy. It’s a fun, entertaining show for any Carsfan. Ka-Chow! 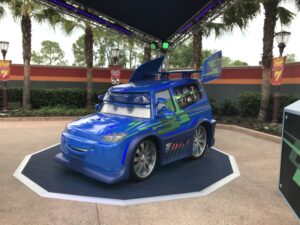 If you’re ready to race to Walt Disney World Resort, be sure to contact Patricia at All for Dreams Travel. Just like Lightning McQueen, she knows the importance of the journey and will take care of all your travel needs! (And her service is FREE!)