Article and photo By FloridaDiva 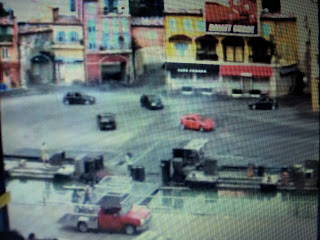 The Lights, Motors, Extreme Stunt show at Disney’s Hollywood Studios is actually an elaborate gift sent over from Disneyland Paris and is spectacularly done. An interactive “director” introduces and explains each player, including the film truck pictured at the bottom of the photo. Choreographed perfectly, the cars and drivers maneuver in sync to the director’s narration, pulling off jaw dropping stunt after stunt.
The sound is deafening as engines roar, tires squeal, smoke rises from the pavement and the director continues to yell his instructions. It’s fascinating to watch, and eventually they put it all together with an energized soundtrack playing from the speakers around you as cars dance and fly through the air. It all culminates in a breathtaking finale that will make you cheer.
But what really makes you appreciate the intricacy of this attraction, is when the drivers take their bow, or maybe “roll” is more appropriate. As the director explains how these death defying stunts are possible, you realize the skill and spot on timing it takes to create such a show. This is especially true considering it’s live every time- there are no second takes for this production.
The director reveals, that while you see only one set of cars at any given time, there are actually a few more stand ins for each vehicle. It all depends on the stunt needed to be performed. There are cars with the steering and driver’s seat facing backwards and cars where the driver operates it from a platform welded to the side of the vehicle.
It definitely takes professionals with nerves of steel to pull off the entertainment spectacular. Unfortunately, the show is rumored to be replaced in the near future by a new attraction, so catch it while you can!
Restrictions: None, an all-ages show accessible to everyone.
Tip: Set camera to action mode and multi-shot to ensure you get the best shots.
Share this tip!