Looking Back at Buzz Lightyear of Star Command 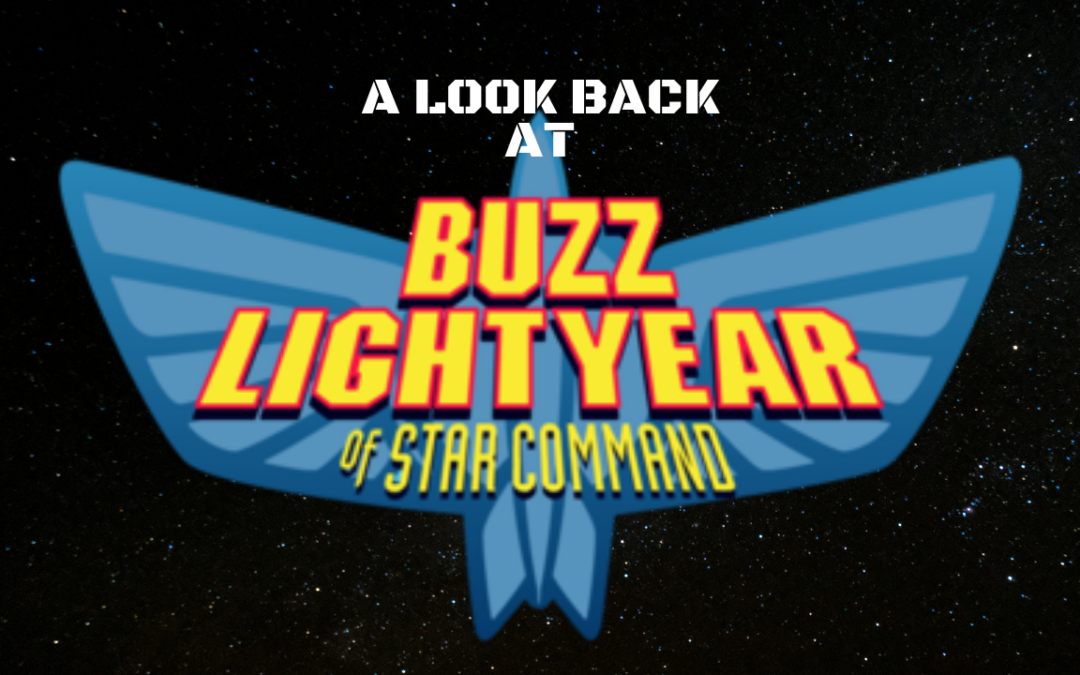 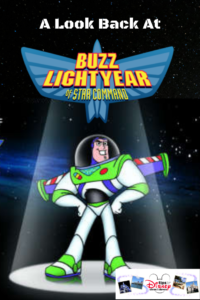 Over the summer, I saw my Sister on the weekends wake up whenever, get some breakfast, and turn on Netflix on her own tablet and watch a Googleplex of episodes for whatever show she was into that morning. it reminded me of a fond memory I have:

I didn’t have Disney Channel at the time. I had it for the majority of my childhood, but I didn’t have it at this one time. My grandma did though! And often we would take a weekend trip to grandma’s house and at 6 AM on Saturday I would get up and watch Buzz Lightyear of Star Command.

It’s a fantastic show and I had a lot of fun watching it and I get really excited when I find an episode here or there, though it’s never had an official home release outside of the pilot film and one extremely rare VHS tape packaged with some extremely rare Buzz Lightyear toys that had one episode on it.

I’ve been trying to think of ways to keep Toy Story alive ever since Toy Story 4 put a pretty hard stop to the franchise and I keep coming back to how this show bridged a lot of years between the second and third Toy Story and that, as far as I can tell, it’s liked by pretty much everyone who remembers it.

So for me and all of those who do remember this show, I’d like to go ahead and present

A Brief Retrospective on Buzz Lightyear of Star Command

The show itself was inspired by the opening sequences in Toy Story 2 and the various mentions Buzz made to his franchise within the movies. The holes leftover were filled with inspirations and tropes from popular Sci-Fi shows, particularly Star Trek.

I’ve been studying Star Trek for the past several months and noticed a lot of parallels between the two. Obvious ones like “Star Command” and “Star Fleet Command” and callbacks to classic storylines like The Mirror Dimension (Ep. The Lightyear Factor), Instances of Diplomatic escort (Ep. The Yukari Imprint), and a few instances of time travel (Ep. Haunted Moon), cloning (Ep. Clone Rangers), androids and robot assimilation (Ep. Return of the Monsters)… All of which are piloted and pioneered in popular media by Star Trek.

Not to say that was the only inspiration. There are the episodes that took place on the planet Roswell- a parody of Mayberry in the Andy Griffith show (Ep. Stranger Invasion)- There were plenty of Star Wars references, Futurama, classic horror films, and the greatest movie franchise of all time: Toy Story!

The show centered around Buzz Lightyear and his team of beginning Star Command Recruits exploring planets and bringing peace everywhere they go as they combat the forces of The Evil Emperor Zurg!

the regular characters are as follows:

Team Lightyear from Left to Right: Booster, XR,Buzz, and Mira. Presented for promotional use and hopes that the show comes back someday…

Buzz Lightyear– the hero of the group. Though he isn’t the leader of Star Command, he is a renowned hero and wrote at least half of the regulations of Star Command. He’s the most highly decorated captain in the fleet and even has several medals and awards named after him.

Mira Nova- the former princess of the planet Tangea. A first-year rookie on the force. While she is shown to lack direction, particularly in times when she has to take command in Buzz’s absence, she has a lot of conviction for the work, leaving behind a life of royalty to become a Space Ranger.

Mira also has the ghosting powers of her people, allowing her to phase through walls and read others minds through tactile telepathy (which is, according to the national ranking of superpowers, very cool).

Booster Munchop: A large alien creature from the planet Jo-Ad. He comes from humble beginnings as a farmer, then a janitor at Star Command, and then the communication and science officer on Buzz Lightyear’s ship. He’s very by-the-book and knows the regulations and schematics of Star Command’s assets second only to Buzz Lightyear and the Commander. He is seen as third-in-the-command on the ship.

Booster looks up to Buzz as a galactic hero and knows all of his adventures from the academy to when he joined the team. Booster often uses this backlog of knowledge as a problem-solving mechanism. So while Mira takes leadership roles in Buzz’s absence, it’s usually Booster who jumps into action first.

XR: The Experimental Ranger. He was created by the LGM’s in Star Command’s science bay and by the showrunners as the comedy relief. His whole gimmick is that he can be rebuilt should he be destroyed. He’s more eccentric than the other team members, producing slapstick humor for the kids and… other kinds of jokes I didn’t get until I was older… ya know, Disney! 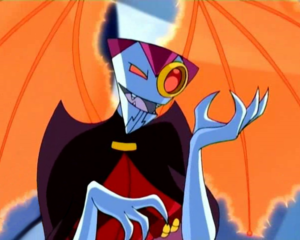 NOS 4-a2 particularly stood out to me. Dare I say that NOS is a scarier vampire than Dracula! Imagine if your phone started attacking you randomly!

Along with our colorful cast of heroes, the villains in the show are quite dynamic. The main villain is Emperor Zurg, Buzz’s arch-nemesis. But he’s honestly one of the least interesting villains in the show. Among the others we have Warp Darkmatter, Buzz Lightyear’s former partner who turned evil; NOS 4-A2, an energy vampire who converts robots and electronics to do his bidding a-la Dracula; The WireWolf, a Star Command officer named Ty Parsec who was infected by NOS 4-A2; XL, the first prototype of XR; and several other characters that all serve to make the show all that more enjoyable. Sometimes, I catch myself thinking more fondly of these characters than I ever do about Zurg and none of them even had a theatrical release!

Hey! Where Did Everything Go?

Now, this show is one of the first I can think of in Disney’s animated TV history that built upon itself. While you were able to pick any episode and watch it, for the most part, the real power of the show comes when you watch it all together in order. Later episodes are affected by earlier ones and the choices between characters are important and have lasting consequences. By the end of the series, all the villains had their stories wrapped up well enough which by the standards of 2001 is impressive. It also had a fairly long life in syndication. While there were only 2 seasons the show was re-run on various channels owned by Disney until roughly 2008. Eight years after it’s initial release and six years after the final new episode!

And the Merchandise! this show had a stellar aesthetic to it and was consequently used in everything. I remember having wall decals based on the show, several toys, and there was a rather decent Video Game to tie into it. there was also a lot of what I’ll call “Sort-of” merchandise where occasionally there would be cereal or a toy or a music CD or whatever that featured Buzz as he appeared in Toy Story, but portrayed him as he acts in the show. Check out this cereal commercial to get what I mean.

Unfortunately, Pixar isn’t very excepting of this show. During the time of Toy Story 2, Pixar had to fight Disney’s micromanagement pretty hard to make the movie a theatrical film against Disney’s wishes that it be a 2D direct-to-video release. We don’t know all the details. They haven’t been released. But my guess is that this show was the compromise Pixar had to make. The show and movie were primarily animated and produced by Disney television animation with only the first 10 seconds of the opening sequence overseen by Pixar. Meanwhile, production on Toy Story 2 was stressful and downright dangerous due to Disney’s strict deadlines. Pixar was not very impressed with their deal with Disney and was in the process of negotiating contract termination assuming acceptable terms and I believe that this tension is the reason Pixar doesn’t accept this franchise.

The fans have a very different reaction. Everywhere I go, whenever I talk about Toy Story on the internet, someone brings up this show and how neat it would be to bring Mira, Booster, or XR into Toy Story proper, but I feel like it’s too late for that. Like I said at the beginning- Toy Story 4 put a hard stop on the franchise. The only time I can find this show being referenced within Toy Story is in the comic book story “The Return of Buzz Lightyear” which I talked briefly about in this article on Disney Comics and Graphic Novels as well as my own video on the subject, but that hasn’t stopped the fan fiction, speculation, and articles by people on the internet from talking about this show as an important part of the Toy Story saga.

Now that John Lasseter is not in charge and the older generation is moving out of Pixar and Disney for the most part, I do believe there is a chance that Nostalgia could bring this show back on Disney+ or home release. Not a big chance, but one nonetheless. So if you liked this show maybe tweet something? I don’t know. #ReturnToStarCommand sounds pretty cool on paper.

Regardless of what happens. Somewhere in the past is a kid who would wake up at 6 AM on Saturday mornings to see Buzz Lightyear of Star Command and I say he’s better for it.

What did you think of this show? What cartoons did you get excited about? Let’s reminisce in the comments below and until next time, remember to keep wishing on stars.