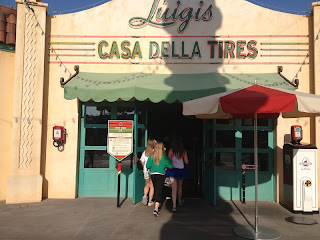 Perhaps one of the most talked about rides of yesteryear at Disneyland is the Flying Saucer ride. This ride, originally in Tomorrowland, allowed guests to navigate their own “flying tires”‘ through the use of  air pressure which lifted the tires off the ground. The ride was plagued with mechanical issues and shut down within five years of opening.
This is why many guests were both excited and a bit skeptical when Disney announced there was a Flying Saucer type ride going into Cars Land at California Adventure. These saucers (redesigned as tires), however, were redesigned and mechanical issues have not been an issue in the one year they have been open.
Much like the Flying Saucer ride, Luigi’s Flying tires moves like an air hockey game, with air coming up through vents on the floor of the ride to help move the tires. The tires, however, will not move from their position without a little help from the guests. Guests, seated two or a small three up on the tire (there is a safety belt) move their bodies in the direction they wish to go. So, let’s say you want to move backwards. You will need to move your upper body back, sometimes significantly so, to get the tire to move that direction. Tires move around the space sometimes bumping one another, and sometimes pretty fast! 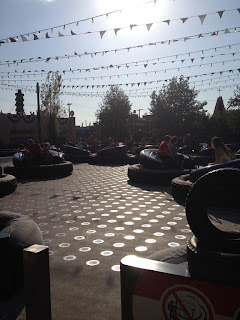 What is fun about this ride is that you, the guest, have some control in the ride. Originally there were large beach balls on the ride, and guests could pick them up and thrown them, just to give the ride a little something extra. Those were removed a while later after guests kept pegging each other with them (I got hit pretty hard once, so I do understand this move!).
The average wait time for Luigi’s is somewhere around 40 minutes. This is because it is sometimes slow loading and is quite popular as it is a newer ride in the fun new Cars Land. After waiting in line, guests are given a wooden triangle and then placed into a “holding” area. The lines don’t really matter much at this point. They only hand out enough triangles for the amount of room on the ride. 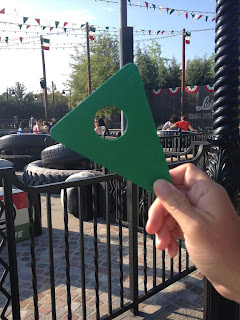 Guests who need assistance can be assisted onto the ride through a special gate to the left of the loading zone. The ride has a scare factor of 1, as it is outdoors and the smallest of guests may not be able to ride (there is a 32 inch height requirement).
Ciao!
Share this tip!