Lunch at Hollywood and Vine in Walt Disney World 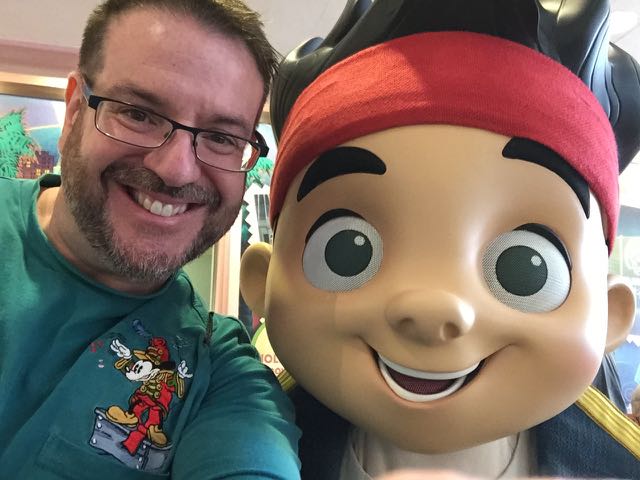 Because my wife Barbie and I are fortunate enough to visit Walt Disney World at least once a year, and because we like to try a new eatery each trip, there are not a lot of restaurants Barbie and I have not eaten at in the theme parks.

We had never been to Hollywood and Vine at Disney’s Hollywood Studios, however, because we don’t have children, and I thought it was just another buffet with characters from Disney Junior that we are not familiar with except in seeing them in commercials or on merchandise at the Disney Store.

Boy was I wrong! Not about it being a buffet with unfamiliar characters, but it isn’t just another buffet FOOD wise! The food was delicious!

But, let me back up. The reason we went in the first place was because we were invited by our friends Kandi and John, who were taking their children Jazzlyn and Grayson to enjoy the Disney Junior Play ‘n’ Dine.

The food; There are plenty of options for all palates, including several soup and salad options and a variety of dressings. Soups the day we visited were Mushroom Beef and Barley and Tomato Florentine.

In addition to the fruit salad and mixed greens, there was Crispy Asian Chicken Salad and Italian Sub Salad, both of which were very tasty. Especially good was the chicken in the Asian Chicken Salad. It was almost worth the visit just for the latter 2 options!

Continuing on down the line, offerings are equally as diverse, including Brown Rice Quinoa Pilaf, Baked Chicken, Sweet Plantain with Corn Relish, and Sweet and Sour Pork Loin, which was another favorite.

The Lobster and Shrimp Macaroni and Cheese sounded awesome, but sadly I have an allergy to shell fish! The BBQ Meatballs were just okay, in my opinion, Cream Corn Spoon Bread was good, Sauteed Green Beans, Chipotle Citrus Barbecue Chicken (great!) and butter corn.

For dessert there is a chocolate fountain, with plenty of dipped goodies, like pretzels, marshmallows and fresh fruit. There are also cookies, cakes and soft serve ice cream, and a sundae station.

As for the play portion, Handy Manny, Jake from Jake and the Neverland Pirates, Doc McStuffins, and Sofia the First come around for photos with guests, and there are several sing and dance alongs.

So, would we return, sans children? Probably not for lunch, to be honest, but dinner is character free, and has a few more entree options. It also gets very loud, which may be a negative for many.

Would we suggest it for friends with young kids? Absolutely! It’s fun for them, and the food ranges from pretty good to excellent.