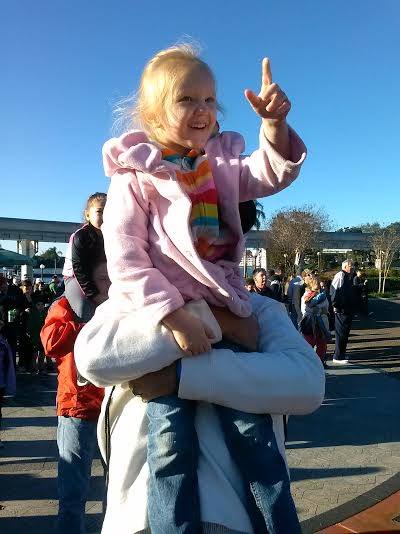 Is it possible for a day at Disney World’s Magic Kingdom to become even more magical? If you plan on attending the Magic Kingdom Welcome Show, then that answer is YES! The show, which is performed at the front of the park on the train station platform, begins promptly ten minutes before the park officially opens. But you will want to pay attention to whether it is an extra magic hour morning, as the show runs before EMH only, and not regular opening. On this particular day, we were running a little behind, and while driving in on the monorail, happened to see the parked train full of characters waiting to pull in! We rushed down the monorail platform and grabbed what we thought wouldn’t be a very good spot, but we were wrong!

The show  begins with a “Hello everyone, welcome to the most magical place on Earth!!!” from the host, a “Main Street Citizen”. It is followed by a “Good Morning” song and dance, with all singers and dancers dressed in their main street best! About 2 minutes into the show the host will announce the arrival of the family that will be “opening the park” (I got to do this when I was six!!!) and you will hear the train horn and start seeing steam, which means that Mickey and his friends are just around the corner! You will likely see Mickey and Friends (Pluto, Donald, Chip and Dale), some princesses, and a few nostalgic characters. All of the characters join the dancers on the platform, and the energy of the crowd jumps up even more, as children and adults alike are getting their first glimpse of characters for the day (many for the first time in their life!). After performing another song, Mickey leads the crowd in a ten second countdown to open Magic Kingdom, and at “one”, he sends off a few fireworks! The gates are officially open, and guests begin flooding Main Street to experience the only time of the day that Main Street will seem calm and refreshing!

Because we arrived just about last minute, we ended up centered behind the two turnstiles. What I found out through this experience is that you WANT to be centered – the closer, the better, unless you are near the turnstiles. As soon as the rope drops, those who have not yet gone through the turnstiles will begin rushing through, and the crowd in front isn’t moving as quickly as the crowd behind, which creates a small jam. Since guests can enter through the turnstiles and stand in front of the train station up to an hour before park opening, try to arrive early. 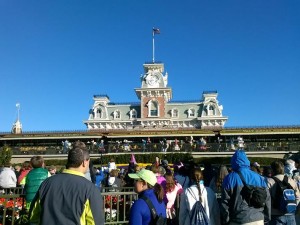 This is truly one of our favorite shows to make at Walt Disney World, between the excitement of the characters, the energy of the crowd, and the simple nostalgia that it creates for adults returning to Disney World, children and adults alike are cheering and smiling ear to ear. 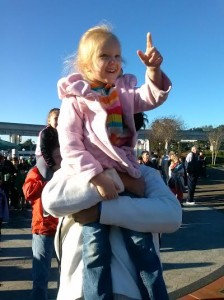 Tips to Take Away:

3. Find a spot in the center

4. Have your magic band/ticket ready for the turnstiles

5. Be ready to wave, clap, cheer, and (maybe) cry with excitement!