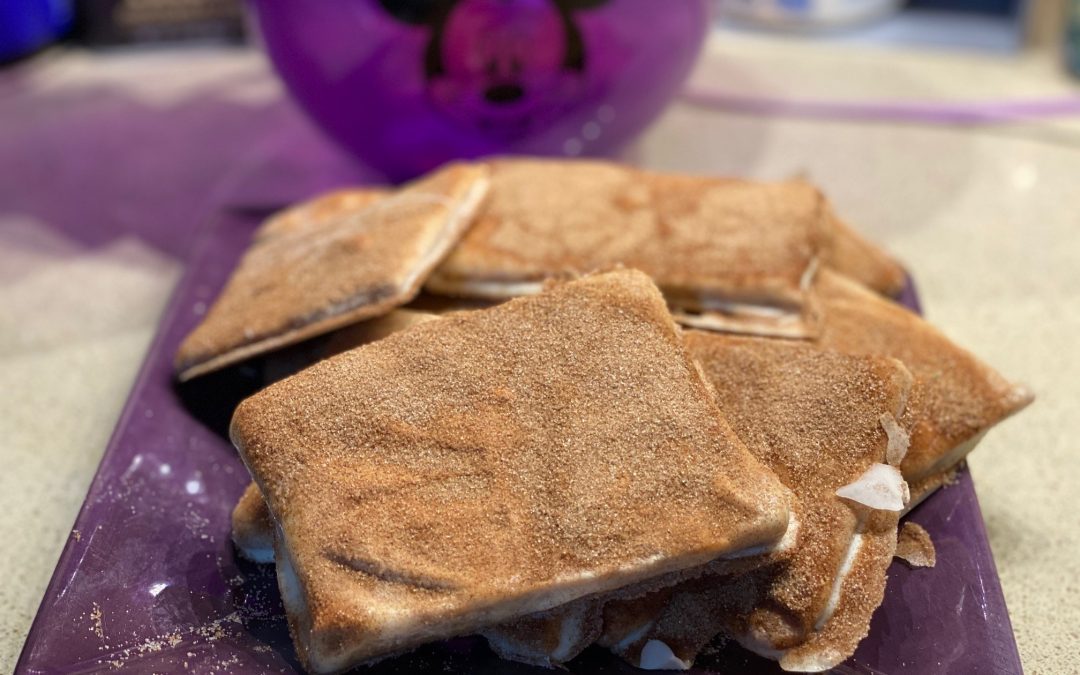 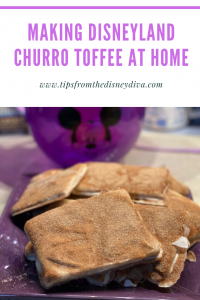 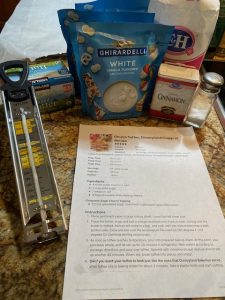 When I’m at Disneyland, I save my Disney Dollars to spend on snacks – churros, popcorn, Dole Whip – are some of my favorites, but about a year ago I tried Churro Toffee for the first time from the Candy Palace and Candy Kitchen on Main Street, U.S.A. It was delicious and I was hooked. It is basically English Toffee with a cinnamon sugar topping, just like a churro. I have also purchased Churro Toffee at Trolley Treats on Buena Vista Street at Disney California Adventure Park, and at Marceline’s Confectionery in the Downtown Disney District. The last time I had Churro Toffee was back on March 11th as I left Disneyland, so I was happy to give this copycat recipe I found online a try and see it matches the real thing.

I started by printing the recipe and looking at what ingredients and supplies I needed. 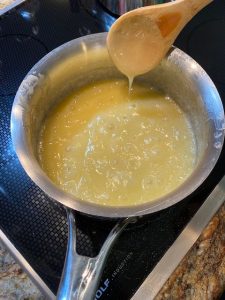 I had enough butter, sugar, cinnamon, salt, a baking sheet, parchment paper, a plastic knife, and a large pot with a wooden spoon. What I didn’t have was a candy thermometer or Ghirardelli White Melting Wafers. I purchased a Taylor Candy And Jelly Deep Fry Thermometer for about $10, which you can purchase through our Amazon affiliate link. As the recipe suggested, I purchased three bags of Ghirardelli White Melting Wafers from Target. Now that I had all my supplies and ingredients, I set aside a Sunday afternoon to make my Churro Toffee. I have never made candy before, so this was all new to me.

Step 1 – Place parchment paper in a large baking sheet. I used the half sheet size just as noted in the recipe.
Step 2 – Place the butter, sugar, and salt in a large saucepan over medium heat, stirring until the butter is melted. The mixture will come to a boil, and cook until the mixture becomes a dark golden color. Cook and boil until the temperature has reached 285 degrees F (137 degrees C). Continue stirring occasionally. 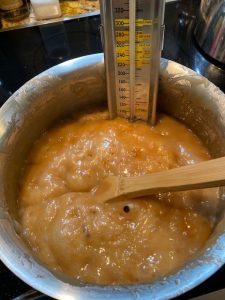 I started with melting the butter and as it started to melt a little, I added the sugar and salt. The time it took to reach the point where it started to boil was nearly 10 minutes, and then about another 5 until it starts turning the golden brown it mentions in the recipe. It was at this point I added the candy thermometer. My mixture did not reach the 285 degrees before it started to burn onto the bottom of my pan even though I continued to stir. It was about 280 degrees and well-browned, so I pulled it off the cooktop and poured it into my parchment-lined baking sheet.

Step 3A – As soon as the toffee reaches temperature, pour into prepared baking sheet. At this point, you can leave whole, and let set up for 20 minutes in refrigerator. 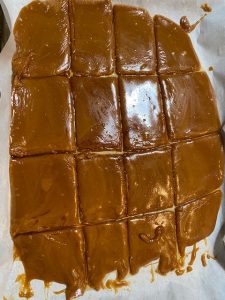 Sliced and ready to set

Step 3B – OR if you want your toffee to look just like the ones that Disneyland Bakeries serve, after toffee sits in the baking sheet for about 2 minutes, take a plastic knife and start cutting into squares. Toffee will still be soft, so you want to cut the squares at this point. I go over these lines at least 4 or 5 times as the toffee starts to continue setting up. Once you are happy with your squares, place in refrigerator and let set for at least 20 minutes.

The recipe gives you the option to leave it whole or cut into squares like it is at Disneyland. I opted to cut into squares, so I took my plastic knife and began to slice the mixture at it was setting. I ran into a problem – my plastic knife melted as it sliced through the toffee. I went an grabbed another plastic knife and that melted too. I found a third plastic knife that was much thicker and this one did not melt. Phew. Also, the baking sheet was too hot to touch once the toffee was placed in it to set. You will need an oven mitt to protect yourself from the hot cookie sheet and I also placed one on the shelf in the refrigerator to place the cookie sheet on while the toffee set up. 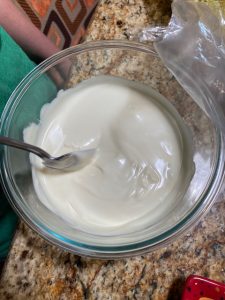 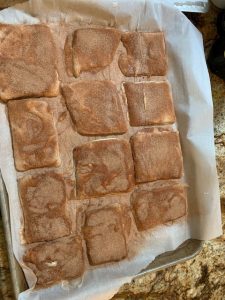 My package of wafer gave me the option to melt in the microwave or in a double pot on the cooktop. I opted for the microwave option and put the first of the 3 pack of wafers into a microwave-safe dish. it took nearly 3 minutes in my microwave on half power to reach the melting point. I used my freshly washed fingers to dip each toffee square into the white chocolate and then placed the toffee onto a fresh parchment sheet on a new cookie sheet. I ended up needing only 1.5 of the 3 packages I purchased to cover my toffee squares. After sprinkling with cinnamon sugar, I put it my cookie sheet back into the refrigerator.

The next step not shown in the recipe was clean up. The pot, spoon, and thermometer were now caked with hard toffee and I had no idea what to do next. I decided to soak the three-item together in warm water along with a splash of dish soap. I let them soak a few hours, and when I pulled out the spoon and thermometer, the toffee had melted away and they were clean. The pot was nearly as easy and just a rinse in water and it also came clean. I was amazed! 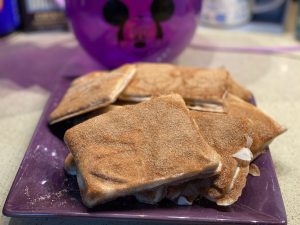 Back to the toffee. After 40 minutes, we took it out to try one. Our opinion? Yes – this does taste like the Churro Toffee you can buy at Disneyland.  The recipe makes A LOT of Churro Toffee, much more than we can/should be eating at 400 calories per square. We wrapped up some to give to friends and when we make it again, we will half the recipe.

Are you ready to head to Disneyland to taste test the ‘real’ Churro Toffee? Be sure to contact Patricia at All for Dreams Travel.  She provides expert advice, and her service is FREE!