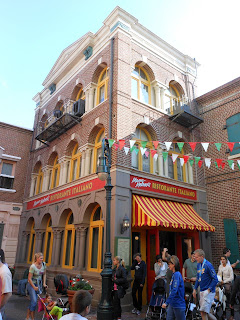 My wife and I have eaten at Mama Melrose’s in Disney’s Hollywood Studios just about every trip we’ve taken to Walt Disney World. We never had a bad meal here, something that can’t be said even of the much loved Le Cellier in Epcot’s Canada Pavilion.

Mama’s is tucked in the back of the park, directly across from the exit of Muppet Vision 3D.
If it were not for the throng of people often seen milling about outside, you might mistake it for just another of the dummy facades that inhabit this part of the park.

Step inside, and the aroma from the wood burning ovens in the open kitchen immediately make your mouth water.

The atmosphere is fun, with lights, grapes, meats and cheeses hanging down from the ceiling, and photos of celebrities, records and California memorabilia line the walls. 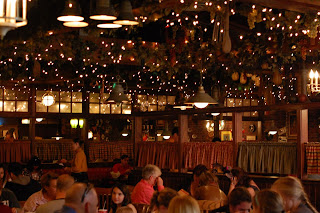 The music has a California theme as well, with songs such as “It Never Rains in Southern California” and “California Girls” on it’s loop.

One complaint, the background music loop is too short.

The food is often maligned as simple Italian that you can get at any local Italian restaurant. Sure, I can get Chicken Parmigiana at any local restaurant, but the Chicken Parm at Mama’s is perhaps my all time favorite. Maybe it’s the Pixie Dust?

On a recent trip my wife and I had the Fresh Mozzarella and Vine-ripened Tomatoes appetizer. 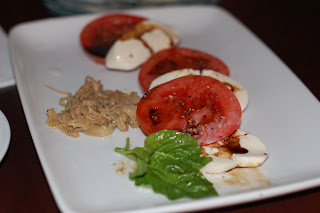 It is delicious. try the onions on a piece bread. Amazing. In the past, I’ve had Crispy Calamari, Caesar Salad, and Mama’s Antipasto for Two, and enjoyed them all thoroughly.

For our entrees, I had the aforementioned Oven-baked Chicken ala Parmigiana, which comes over spaghetti, for $17.99. 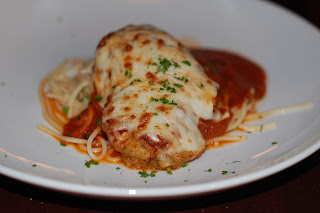 I have, admittedly, had better sauce, but the chicken was tender and juicy, and the spaghetti perfectly cooked, not too hard or too mushy.

My wife’s dish, however, was the clear winner. She had the Chicken Campanelle. Wood grilled chicken over Campanelle pasta tossed with Romanesco (which is, as we were told by our server, a broccoli flower), sun dried tomatoes, fresh spinach and sweet onions in a Four Cheese Cream Sauce, for $18.99. 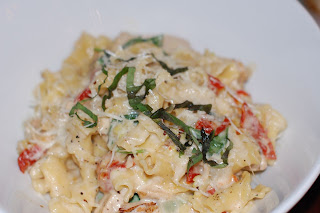 The flavors in this dish melded perfectly. It was terrific, and I was not at all upset when she couldn’t finish it. I “took one for the team”, and wolfed it down.

On other trips, we’ve had the various flatbreads, and again, all perfectly prepared.
We were too full for dessert, but, although I am now sounding like a broken record pulled off of Mama Melrose’s wall, everything was delicious.

I think you get the point, I love Mama Melrose’s and you will too!