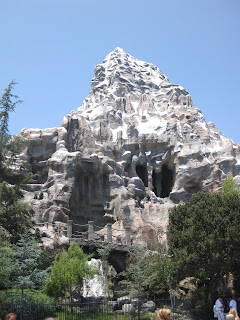 When I was a kid, my sister and I used to play the “I spot the Matterhorn” game. Now that I am older, my husband and I have a little game going each time we visit. The tip of the Matterhorn is tall enough to spot quite a distance from the park. Once in the park, however, it looks positively majestic.

It is hard to believe that the Matterhorn Bobsleds, which remains one of the most popular rides at Disneyland, was not around when the park first opened. In fact, for the first few years after park opening, the area was designated for picnics. The large pylon that was a part of the Skyway ride was viewed as something of an eyesore by Disney executives. Before long, they were thinking of creating a roller coaster type of ride for the space. After Walt Disney took a trip to Switzerland on a film shoot, he was so impressed by the real Matterhorn that he began to dream up a ride that would combine a fake Matterhorn mountain and a roller coaster. He thought it would be fun to weave in and out of the mountain. When the Matterhorn opened in 1959, it was the first tubular steel roller coaster in the world. This is just another example of how WED Engineering was ahead of its time in the creation of rides.

The Matterhorn mountain is made of steel and and wood that is surrounded by man made rock to
make it look more like a mountain. Imagineers have used many tools, such as the placement of trees and waterfalls and rocks to make it look more authentic and in fact, taller.

Diva Tip: The Skyway ride that closed in 1994, used to travel right through the middle of the mountain.

Today’s Matterhorn Bobsled ride is the result of many changes made over the years. The hole where the Skyway ride went through was mostly sealed up. In the 1970’s a fan favorite, the Abominable Snowman, was added to the ride. His red glowing eyes and loud roar add to the ambiance of the ride, making it seem as if guests are truly on a bobsled adventure through a snowy mountain. The bobsleds travel through ice caves, up and down and curving all around. Waterfalls and small drops may mean that guests get a bit wet!

Diva Tip: There are two lines! Guests enter from Tomorrowland and the line breaks into two different sides once guests reach the awning. The two lines will follow two different tracks on the ride. The Fantasyland side is said to have more banking turns and be a longer track. During less crowded times, there may only be one line open.

Also, nighttime is THE BEST time to ride this ride. The light reflections from inside the mountain are amazing! 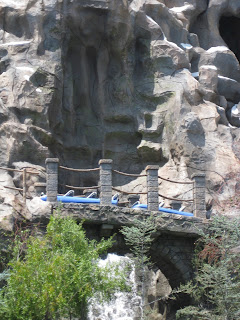 Despite the fact that this is a coaster, the Matterhorn Bobsleds is beloved by kids of all ages. Guests must be 42 inches or taller to ride and there are loud sounds, drops and it moves fairly fast so the scare factor is a 7. There is also the fact that banking turns are a bit tight, adding to the fear factor, and guests do get jostled a bit in their bobsleds. Guests in wheelchairs and electronic scooters must transfer.

There is no fastpass for the Matterhorn Bobsleds and wait times normally hover around 20 or 25 minutes. It is usually longer at night, so plan accordingly.

Finally, in recent years, there have been cast members and even Mickey himself who have climbed the mountain in a daytime show. Be sure to be on the lookout!