In case you live on a planet even further from the center of the galaxy than Tatooine, last week was May the 4th, the official fan-made holiday for all things Star Wars. (As in “May the Fourth Be With You”). It has become a day for fans everywhere to show their #StarWarsSide, stock up on Star Wars gear from vendors around the galaxy, and in general celebrate their beloved franchise.

Now, not everyone is able to celebrate May the Fourth in Disney Parks, but the good news is you don’t have to be in Orlando or Anaheim on that particular day to revel in all things Star Wars!  A fan favorite event, Star Wars Weekends, is held at Disney’s Hollywood Studios every Friday through Sunday from mid-May to mid-June. Valid park admission is required, but once in the park, most events are free! (Click here for more details.)

Star Wars Weekends is like a convention for fans, many of whom dress up in their best Star Wars attire to celebrate. Each weekend features Star Wars celebrities, ranging from voice actors in Star Wars: The Clone Wars and Star Wars: Rebels, to actors in the original and prequel trilogies (Click here for information about the 2015 celebrity schedule.) Much to the delight of fans, these guest celebrities offer photo and autograph opportunities! You need to obtain a Fastpass (which doesn’t count against your allotted three Fastpasses under FP+) at the front gate with a designated return time for your autograph and photo.  Fastpasses are limited and given on a first-come/first-serve basis.  Lines form early, so set your alarm clock! 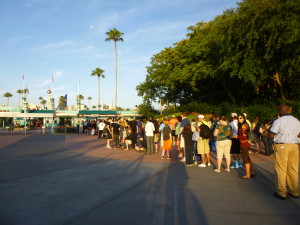 TIP: Fastpasses to see the most popular celebrities will go quickly, and not all celebrities are available each day.  Plan accordingly. We arrived an hour before park opening to obtain a Fastpass to see Peter Mayhew (Chewbacca).

You’ll also want to get to the park early so you can watch the Stormtroopers at the Gate.  Before the rope drops to open Hollywood Studios, guests are entertained by two stormtroopers patrolling from high atop security towers with a show that you don’t want to miss!  It’s hysterical! 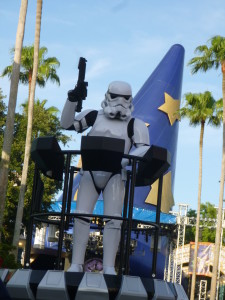 A highlight of Star Wars Weekends is the Legends of the Force: Celebrity Star Wars Motorcade. This is a motorcade “parade” down Hollywood Boulevard of all the guest celebrities for the weekend, accompanied by Star Wars characters walking and waving to the crowd.  It also includes appearances by local chapters of the 501st Legion and Rebel Legion which, for non-Star Wars geeks, are groups of enthusiasts who build and wear quality costumes to promote Star Wars and to contribute to the local community through costumed charity and volunteer work. To say the costumes are amazing is an understatement.  It was unforgettable to see them marching down Hollywood Boulevard! The dedication and detail is unbelievable, and something sure to inspire any true Star Wars devotee. 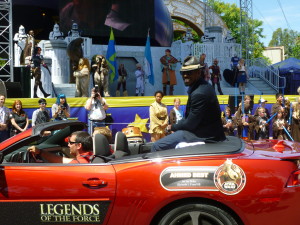 We opted to purchase the Feel the Force Premium Package, which allowed us access to reserved viewing for the Legends of the Force Motorcade  (complete with unlimited soft-drinks, water and Mickey Bars!), access to a reserved viewing location for Symphony in the Stars fireworks show and the Star Wars themed dessert party with specialty alcoholic and non-alcoholic beverages.  It was wonderful to have reserved areas and the desserts and drinks were fantastic, but if it’s not in your budget, you can certainly see the motorcade parade and fireworks without incurring extra expense. 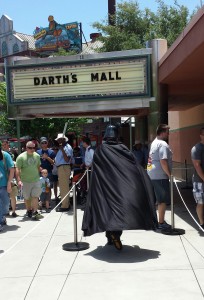 Items ranging from weekend themed t-shirts and pins to personalized cell phone cases to my son’s favorite – a 3D printed statue of his favorite character from Star Wars complete with his face – are available. My son has a stormtrooper, though the list of possibilities now includes Princess Leia, an X-Wing pilot, a Jedi, a Tie Fighter pilot, or Han Solo frozen in carbonite.

TIP: This year there is a new Deluxe Feel the Force option, which includes a reserved area for the celebrity motorcade and fireworks show/dessert party, access to all the celebrity talk shows and priority access to Darth’s Mall! Given that we waited over an hour to enter Darth’s Mall, this might be a great choice! (Click here for details.) Another new option is the Rebel Hanger: A Star Wars Lounge Experience, which looks like a wonderful way to wind down after a day exploring the galaxy! (Click here)

There are also special dining opportunities available only during Star Wars Weekends. 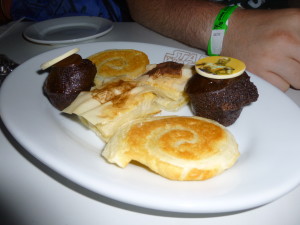 Our family tried the Star Wars Dine-In Galactic Breakfast at Sci-Fi Dine-in Theater Restaurant. It was an extradorinary experience! 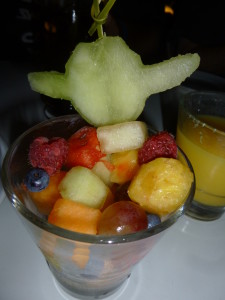 We enjoyed clips from the Star Wars movies on the big screen while eating our breakfast and making the best trades we could with the roaming Jawas.

TIP: Bring trinkets if you’d like to have some trading fun with Jawas.  We brought jingle bells, but any cheap, bright, shiny object will catch their attention and set you up for a good trade! 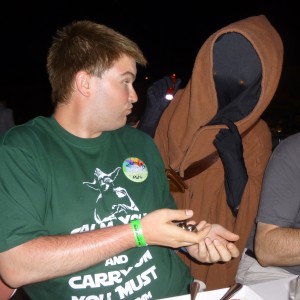 Another dining choice is Jedi Mickey’s Star Wars Dine at Hollywood & Vine dinner package. This is a dinner buffet, complete with Mickey, Minnie and other favorite Disney characters dressed in their Star Wars attire.  A Fantasmic option is also available for this package.  (Click here for details). 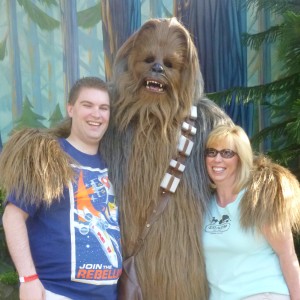 The biggest highlight for fans has to be the photo ops. Always wanted to meet Chewie? Get in line early! By noon on the first day we went, it was around a two hour wait. Darth Vader had a similar line. 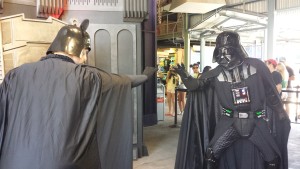 What about getting a family photo with Luke, Leia, R2-D2 and C-3PO? You have to time it right (i.e., get really lucky!), but the group right in front of us did it last year. What a Christmas card that would make! Lesser known characters are also out, such as Commander Cody, Captain Rex, or bounty hunters like Jango or Boba Fett. 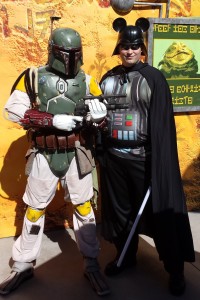 The Jedi Training Academy runs almost double the number of sessions for your little one to stand up to Vader or Maul (or in the case of one youngling I saw, join the Dark Side). Even if you don’t have a little one to join in, the show can be worth watching. The Jedi Masters tell jokes that must have been written by Threepio, but carried out with wit like R2.

Finally, try not to go home too early. The Symphony in the Stars fireworks show, introduced last year, is something to behold. It’s all your favorite John Williams Star Wars tracks with the majesty and magic of Disney. The show is about 15 minutes long, but is preceded by an “end of day” show featuring photos of fans from around the park. Don’t miss it!

Which brings me to my favorite part – the fans. If you enjoy the Star Wars movies but have never been to a convention or Star Wars Weekends, GO! These people are the kindest, most welcoming fan base in all the galaxy. Normally I avoid anything with more than a 30 minute wait. At this event, though, waiting in line doesn’t seem like such a burden, because it’s so fun to interact with everyone! If you don’t talk to those around you, you’re missing out. These are passionate and outgoing fans. They’ll be happy to tell you about their favorite Star Wars moment, costume, or character. They come in all shapes, sizes, and molds. They want to share their #StarWarsSide with Masters and Padawans alike. 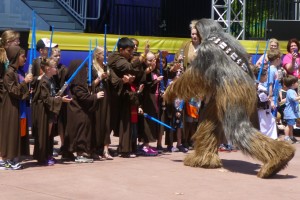 So whether it’s wearing your Star Wars attire, meeting your favorite character, getting that perfect photo or making a great trade with the Jawas, I hope you make magical memories at Star Wars Weekends.  May The Force (and the Magic!) Be With You!