Meeting Rare Characters at Mickey’s Not So Scary Halloween Party 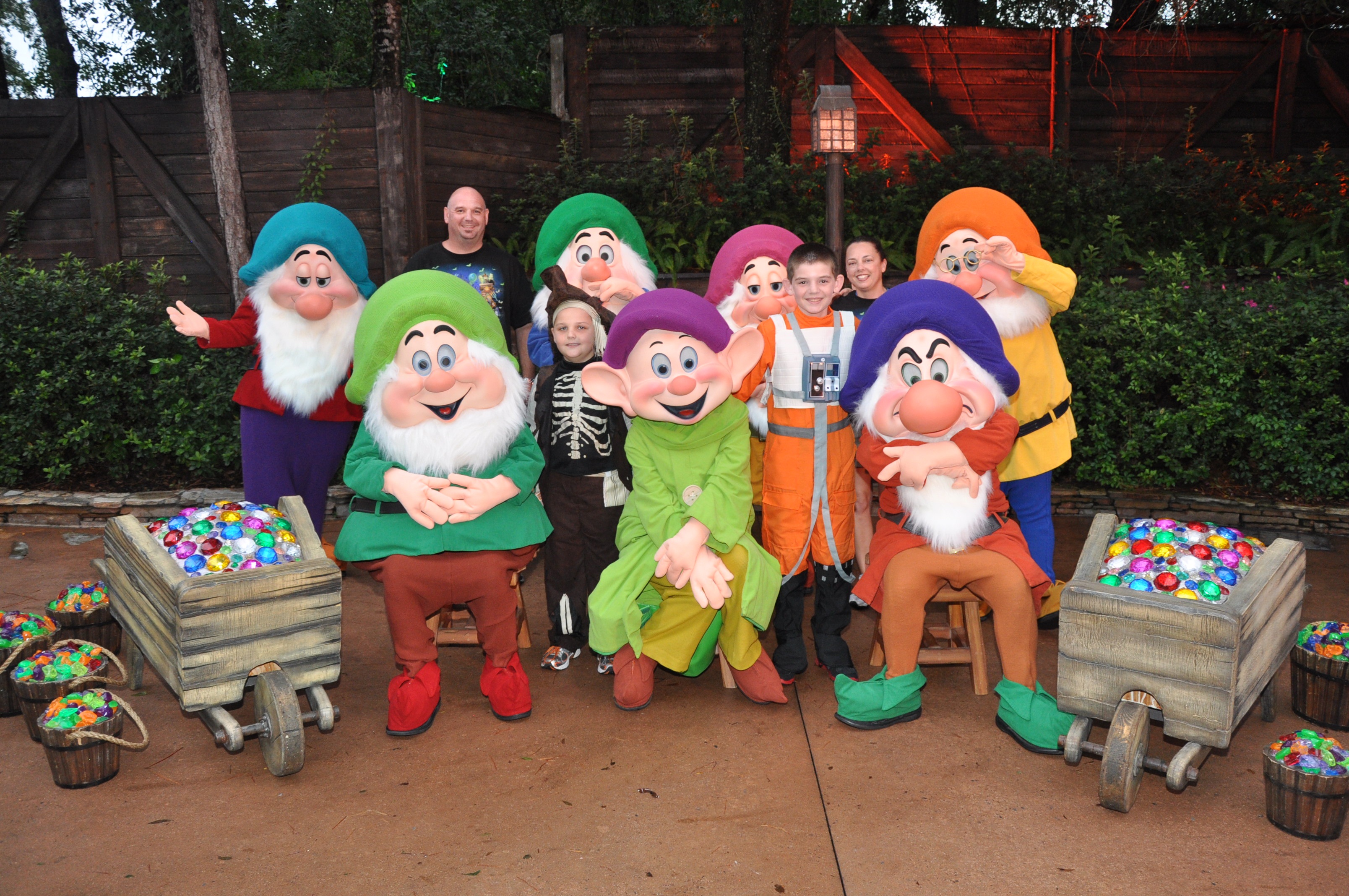 Mickey’s Not So Scary Halloween Party is held two to three times a week, from 7pm-12am. This year, the first party began on September 15 and runs through November 1. This party is a great opportunity to meet those rare characters that you don’t normally see out at meet and greets during the day. 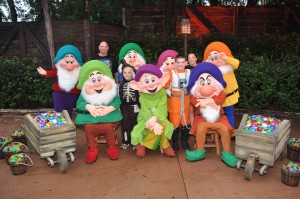 The first time we attended Mickey’s Not So Scary Halloween Party was in 2012.  Our main goal that year was to meet the elusive Seven Dwarfs from Snow White and the Seven Dwarfs.  At the time, Seven Dwarfs Mine Train had not been built yet, so the Dwarfs were meeting next to Splash Mountain.  Now that the Mine Train is up and running, the Dwarfs meet next to the new Fantasyland wall on the right side from 6:50-11:30pm.  We waited in line about an hour before they were scheduled to meet.  The Dwarfs are a VERY sought after character meet and greet and if you don’t get in line early, you will miss a lot of the party itself while you sit and wait in line.  Because there are so many Dwarfs, they do not sign autographs, but there is a PhotoPass Photographer who will be happy to take your photo with both their and your camera.  This is a meet and greet that is not to be missed if you can help it. 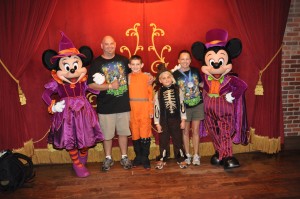 The only other characters we met with on this trip were not rare, but they were decked out in their Halloween costumes.  It was none other than Mickey and Minnie Mouse.  At this time, both Mickey and Minnie were meeting in Town Square Theatre.  Mickey does still meet here for the party, from 7:00pm-11:45pm, but Minnie has been moved to Storybook Circus.  She meets from 7:00pm-11:30pm. 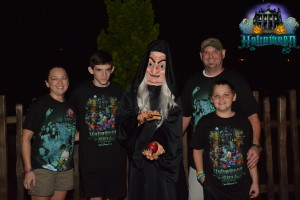 The next time we attended the party was last year, in 2014.  To be honest, we didn’t focus on meeting characters, we were all about the candy, parade and rides.  We did, however, have a chance encounter than none other than the Witch from Snow White.  Unbelievably, there was NO line for her.  We couldn’t believe our luck.  I don’t know if the Witch autographs or not, as we weren’t planning on meeting characters so we weren’t prepared for autographs, but again, there is a PhotoPass photographer there to capture the memory.  The Witch meets next to the Hall of Presidents now, from 7pm-11pm. 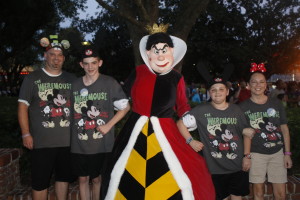 See how much fun my teen and tween are having? Look at those smiles!

This year I wanted to make sure we did actually get at least two more characters.  We started by waiting in line for the Queen of Hearts from Alice in Wonderland.  The Queen of Hearts meets next to Mad Tea Party from 7:15pm-7:45pm.  This actually became a little problematic for us, as Alice and the Mad Hatter also meet at the Mad Tea Party from 7:00pm-7:45pm.  There are no signs indicating who meets where, so we accidentally ended up in Alice and the Mad Hatter’s line and waited for about 30 minutes before the Queen of Hearts came out and they started a separate line.  Unfortunately, that means we lost our place in line and had to start over, but since the Queen of Hearts doesn’t speak, that did make the line go a little faster.  The Queen DOES sign autographs and has a PhotoPass photographer. 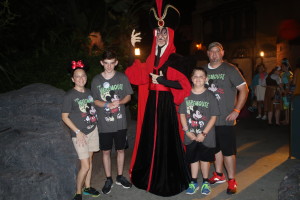 We started to get a little frustrated by how long the lines for characters were and were on the verge of giving up when my husband saw none other than the evil Jafar from Aladdin.  Jafar meets near the Swiss Family Treehouse from 7:00pm-11:00pm.  Jafar doesn’t speak, which makes the lines run smoothly, and he does not sign autographs and does have a PhotoPass photographer.  After meeting Jafar, so much time had passed that we had to move on from character meet and greets to trick or treating and staking out a spot for the parade.  This is the only downside of the party, in our opinion.  It takes so long to stand in line for many of the characters, you just don’t have time to meet with more than two or three and still be able to enjoy the fireworks, parade, trick or treating and riding rides.  In my humble opinion, I wish the party would officially begin for hard ticket guests at 4pm instead of 7pm, and the guests without the hard tickets would be cleared out, there is just no way to get everything done in one party.

There are several other meet and greets scheduled for the party that we weren’t able to get to, but I’ll be happy to list the rare characters for you should you get the chance to go:

I truly hope you are able to attend Mickey’s Not So Scary Halloween Party at some point and get to meet some of these characters.  The interactions are fun for adults as well as children and the thrill of meeting the rare characters is truly exciting.  Remember if you go, just be patient, the lines can be long.  However, if you set yourself on just one or two characters, meet and greets can be doable along with the trick or treating, parade, fireworks and rides.  It just take proper planning and positioning to minimize your wait time as much as possible so you can move on to having even more fun at the party!