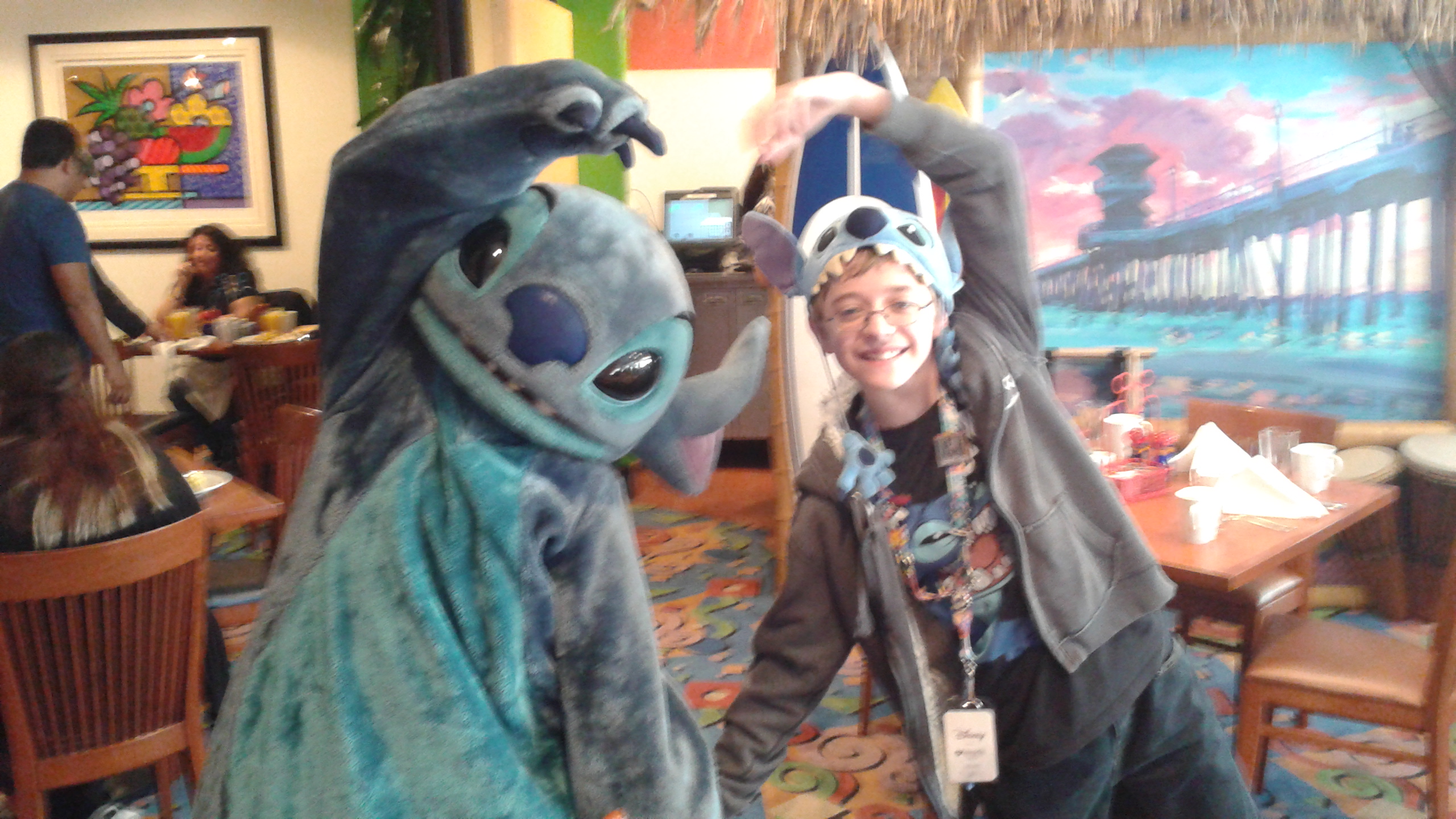 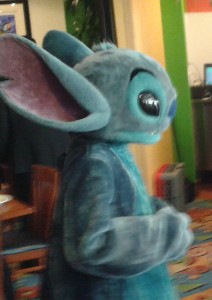 On our Spring Break trip we happened to go to Disneyland over my son’s 13th birthday, and he has LOVED Stitch since he was about one year old when we took him and my daughter to see Lilo & Stitch. He had this little stuffed Stitch plush doll that he took everywhere with him. He used to rub the two tags at the bottom together while he snuggled with him until he calmed down or fell asleep at night.

Every time we have been to Disneyland we have headed straight to City Hall on Main Street and asked if Stitch is going to be in the park. The answer is almost always the same. Stitch spends most of his time at the Aulani resort in Hawaii so that he can be closer to his ohana. So sadly my kiddo had never had a chance to meet his favorite character. So I made it my goal.

Now, since then I have found out that Stitch regularly makes an appearance at the Disney Card Member exclusive meet and greet that is found in California Adventure. Since we did not have a Disney Credit Card this never applied to us. But there are other places that you can see him. For instance, sometimes he appears in Mickey and the Magical Map, and after doing some research I found out that he often makes an appearance at the Mickey and Friends Surf’s Up Breakfast found at the PCH Grill inside Paradise Pier Hotel. So we decided to take him for his birthday.

Make sure you make a reservation for any character meal if you want to make sure you get to eat there or if you don’t want to wait for a crazy amount of time. You can make your reservations 60 days in advance by going here or by calling (714)781-DINE or (714)781-3463.

So we went, and quite honestly it took a really long time for Stitch to get over to us. But meanwhile, we watched and Stitch truly spent a phenomenal amount of time with the children- more than the other characters who had easily made their way around the room multiple times. We were waiting for the moment, the special one. The one where your child meets their favorite character. It doesn’t matter how old you are, because that moment is pure magic. As a parent there is absolutely nothing better than watching your child’s eyes light up, full of joy, because of that magic. 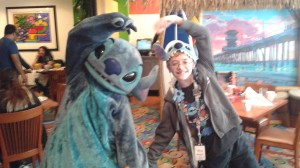 Stitch did not disappoint. He came up to us pumped full of energy even after seeing tons of other kids. He zeroed in immediately on my son’s love of Stitch (he wore every possible Stitch item that he could shirt, hat, lanyard, belt, and his entire collection of Stitch pins) and pointed at his shirt energetically, after smelling each other’s armpits, Stitch pulled him into a big awkward teenager hug. It was adorable. They posed for a photo of the two of them, each as one half of a heart, and the whole interaction made my mom (my kiddo’s grandma) who had joined us for the trip cry happy tears. There was a lots more hugging and lots of high fives. Stitch even tried to get my son to give him his birthday cupcake. (He offered only a tiny bit.) While all of this was happening my hubby and I ran around the table trying to get photos of absolutely every moment. Most of it is a blur since Stitch barely stops moving, which seems true to the character who often reminds me of a 3 year old with unusually high naughtiness level. Hmmm…

At the very end just before he left he spelled out the word Ohana with his arms and had us try and guess the word. We managed to eventually. (Well at least my husband did.)

We came away from this meet and greet more than satisfied, even though the cost was about $35 per person and I wouldn’t hesitate to do it again. It was by far one of our top favorite moments and it was full of Disney magic.