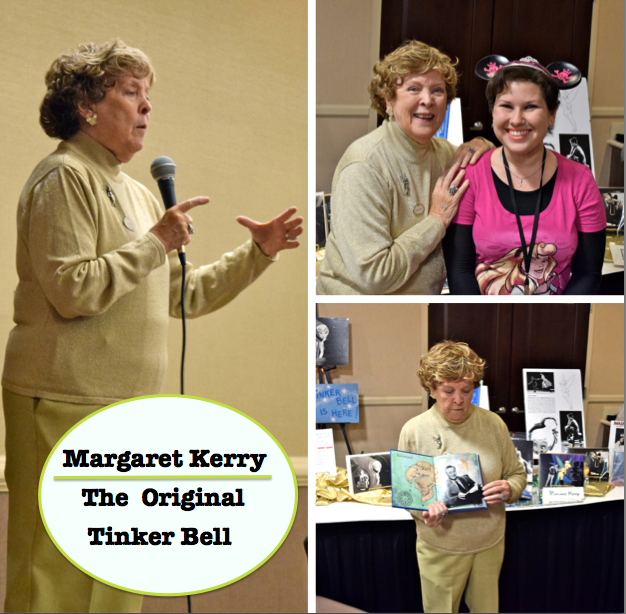 I was lucky enough to attend the first annual Mouse-Con, which was a Disneyana Fan Convention held at the Hilton in Concord, California. I had an amazing experience and I plan to attend every year. (Diva Tip: The second annual Mouse-Con is scheduled for November 16, 2016 at the same hotel, and unlike the first convention, tickets will be sold online in advance. Check Mouse-Con’s website for updates.)  One of the special guests (and my personal favorite) was Margaret Kerry, the original reference model for Tinker Bell in Walt Disney’s animated feature, Peter Pan. 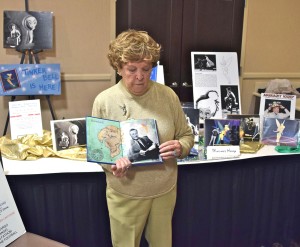 Mrs. Kerry is 86 1/2 years young. (She said that once you are in your eighties, you need to include “and a half” in your age just like you did as a kid.) You would think that at her age, she would be moving and speaking slowly like a turtle, but it was the complete opposite. She reminded me more of a tiger, and boy, is she fierce! She is in absolute great shape, both physically and mentally. She began dancing at four years old and hasn’t stopped moving since! She told me that she exercises at Curves three times a week and she still loves to dance. Much to my surprise, she then did a nice little tap number right there on the spot. She was one of the sweetest ladies I have ever met and an absolute delight. I had the honor of taking a picture with her and she even taught me a Hollywood trick when taking pictures in order to look more refreshed. She said to ask the cameraman to count to three. Look down on “one” and “two” and then on “three,” look up at the camera and smile. She also taught me the official way to spread pixie dust with someone, which she learned at one of the Tinker Bell Half Marathons. (Diva Tip: To spread pixie dust like Tinker Bell, you basically do the fist bump from Big Hero 6 without saying “Bah-a-la-la-la.”) 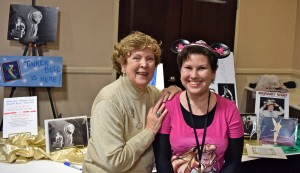 During her speaking event, Mrs. Kerry shared the amazing story of how she became Tinker Bell. She was 19 years old at the time and was working on four other projects, but when she received a call from her agent to audition at Disney for a three and a half inch tall sprite who doesn’t talk, she couldn’t resist. “I can’t tell you how magic that name was, even then,” she explains. She jokingly said that she told her agent, “I’ll do something so the ambulance can take me over,” so that she could get to the Disney lot as soon as possible. On her way to the audition with Marc Davis (the animator of Tinker Bell), she got lost on Disney’s lot, but she wasn’t worried at all. “I’m on Disney’s lot. Everything is going to turn out alright,” she remembers thinking to herself. A nice man (who she believes turned out to be Ollie Johnson, one of Disney’s Nine Old Men) helped her find the audition room. For Mrs. Kerry’s audition, she choreographed a nine year old boy fixing breakfast to an old instrumental 45 record. The reason she chose to do this was because Disney wanted someone who could do pantomime, which is the art of expressing meaning through gestures accompanied by music. Mrs. Kerry brought her own player with her and Mr. Davis himself got down on his hands and knees to plug it in for her. This is something Mrs. Kerry said would never happen at Warner Brothers or MGM. A couple of days after she auditioned, Mr. Davis called her and asked, “Would it be convenient for you to come to work next Tuesday?” This was followed by “What time do you want to come?” For nine months, Mrs. Kerry acted out the scenes of what they wanted Tinker Bell to do in the film. “Print it. Take another one for protection,” they would say. That is how she became known as “Two-Take Tink.” (Diva Tip: Not many people know this, but Tinker Bell wasn’t the only character Mrs. Kerry was the reference model for in Peter Pan. She was also the reference model for the red-headed mermaid and she even did her voice-over. “We were only trying to drown her” was her famous line from the film.) 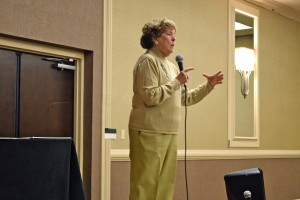 Her speaking event at Mouse-Con was more than just speaking. While the other older speakers sat at a chair behind a table and spoke into a microphone, Margaret spoke “Stand-Up Comedian” style and took the microphone everywhere she went on stage. She also did a couple acting performances, one of which was of her standing on a mirror and noticing the large size of her hips for the first time. (Sound familiar? It should. It’s the first big scene we see of Tinker Bell in the film.) At the end of her speaking event, she had the entire audience get up from their chairs, stretch, and pretend to put their pajamas on. Then she read an exempt from J.M. Barrie’s Peter Pan and did the voices of an English narrator, Peter Pan, and Wendy. She closed by reminding the audience that all you need to make your dreams come true is “faith, love” and the audience shouted with a resounding “pixie dust!” Meeting the original Tinker Bell was an amazing experience I will never forget and Mrs. Kerry is an absolute delight! I hope our paths cross again.  (Diva Tip: If you would like more information about Margaret Kerry, here is the Official Margaret Kerry Website: Tinker Bell Talks.)

Portions of this article previously appeared on The Disney Moms.