Mickey’s Not So Scary Halloween Party Review at Disney World 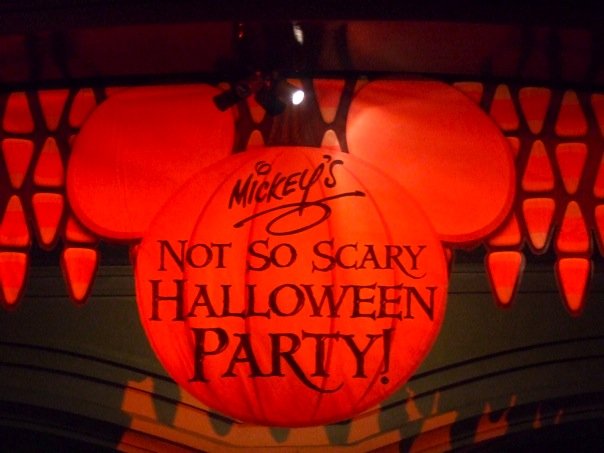 I am going to start off with a confession I love all things Halloween. In fact, my love for Halloween is almost as strong as my love for Disney.  Surprisingly, however, it wasn’t until adulthood that I visited Disney World during Halloween season. It was amazing, of course, since it combined two of my favorite things, and has become one of our favorite times to visit.

If you’re going to be at Walt Disney World in late September, any time in October, or the first couple days of November, I strongly recommend checking to see if there is going to be a Mickey’s Not So Scary Halloween party during your visit. This is a separate, hard ticket event that tends to sell out, so advanced planning is a good idea. To find out more information or purchase, tickets, check out Disney’s website. We have attended the party twice now, one before my daughter was born and once after, and had a lot of fun each time. One of my favorite things about Mickey’s Not So Scary Halloween Party is that it gives adults a perfectly good excuse to show up at the parks in costume. Sure, kids can do it all the time, but most of the time you don’t see adults running around in a costume. Your costume doesn’t even have to be a Disney character, you can dress up as whatever your heart desires.

The first time we attended the party, I decided to dress like a pirate. In addition to Halloween and Disney, I have a love of all things pirate and so it was a costume I already had on hand. The members of my family opted not to go for a group theme that visit, so we all just brought whatever we had on hand and thought would be comfortable in the Florida heat. There is so much to do at the party that it’s pretty darn impossible to do it all. We decided to focus finding the party exclusive photo ops. This was before the Rapunzel bathrooms were put in, so one of the coolest photo ops was having our picture made with Cinderella’s coach in front of the old Skyway station in Fantasyland.  There were also a couple of neat photo ops near the Haunted Mansion- one with hitchhiking ghosts and one with the carriage that sits out front of the queue.  We also hit one of the Trick-or-Treat trails that was Alice in Wonderland themed that year. 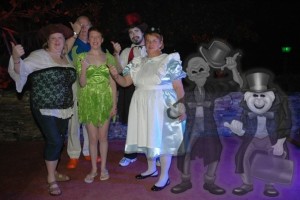 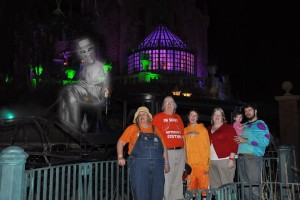 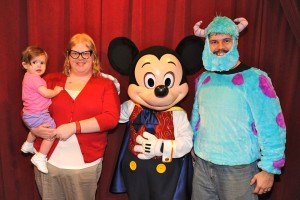 We got to the party earlier this time, since we knew there was so much to do. Since this was the first day of our trip and my daughter’s first time in the park, we started off with a visit to Mickey Mouse. Then we sought out the specialty photos again- a cool party themed frame in Town Square and the ghost pictures from Haunted Mansion. Unfortunately, there must have been a malfunction with the photographer’s camera for the hitchhiking ghosts because those pictures never showed up on our Photo Pass, even after a stop at the Photo Center to try and locate it. 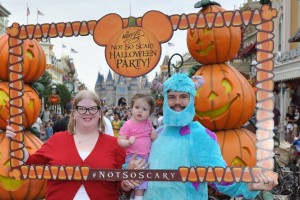 After we got our pictures, we found a good spot in Town Square to watch the Boo To You Parade. My favorite thing about the parade is the Headless Horseman who races down Main Street to kick things off- it’s almost impossible to get a good picture of him but it’s such a cool thing to see. 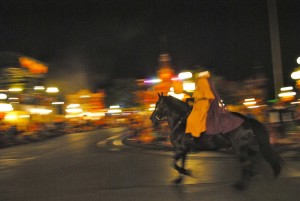 After the parade was over, we made our way up to the hub to get a good spot to watch the Happy Hallowishes fireworks. We attended the last party of the year, which also happened to sell out, so it was quite crowded  in the hub, but the fireworks were great as always and definitely worth the wait. 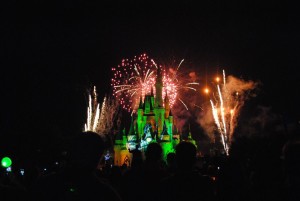 If you like Halloween and you like Walt Disney World, definitely add Mickey’s Not So Scary Halloween party to your to-do list. It’s certainly one of my favorite things to do at Disney World.