Mondays on the MAMArail: Art of Animation Cars Suites Review from Disney Musings

We are all about keeping the Disney blogging community healthy here at Tips from the Disney Divas and Devos and so we’re taking Monday’s to highlight some of the great other blogs out there that will help you plan fantastic trips! We hope that you will visit these blogs, like their pages, and keep coming back here for more referrals to some great perspectives on Disney Trips!

By: Nick
On our last trip to Walt Disney World, my wife and I had the great pleasure to stay in a Cars Suite at Disney’s Art of Animation Resort.

Some background. I love the movie Cars. When Cars was released in June of 2006, I had just the month before driven a portion of Route 66 from Flagstaff, Arizona to Oklahoma City, Oklahoma, and had seen many of the sites that are referenced visually in the film, including staying in a Teepee (or cone) Motel (not as cool as you’d expect, by the way). I’d also seen many a lovely small town now abandoned, as Radiator Springs is at the beginning of Cars. In other words, the film really connected with me on an emotional level.

Jump to 2012, and we visited Disneyland, and I was absolutely enthralled with Cars Land at Disney California Adventure, and actually spent a very large portion of our 4 days in “Radiator Springs”.

Now, you can actually STAY in Radiator Springs at Disney’s Art of Animation Resort!

The theming of this section of AoA is extensive.
As you approach, you are greeted by billboards, and the Sheriff, to let you know to keep your speed down. 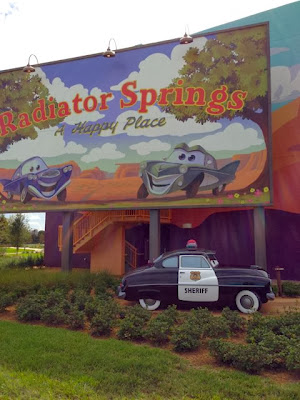 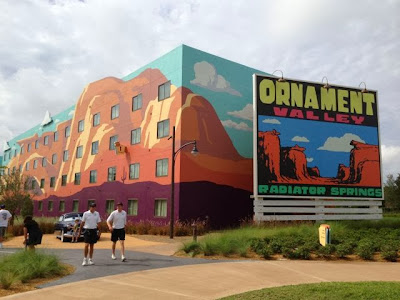 You then travel up Route 66, to one of 3 themed buildings, or the Cozy Cone pool area. 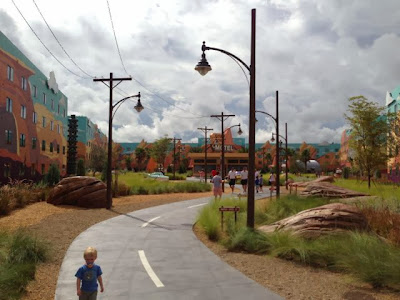 The building to the left is themed after Luigi’s Tires, where you’ll find the proprietor and Guido. 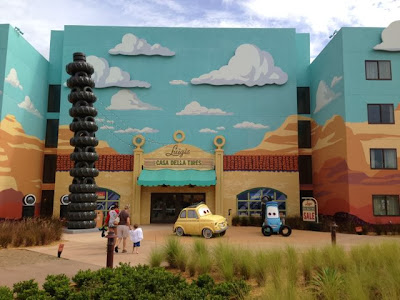 To the right is Tow Mater’s Towing and Salvage. 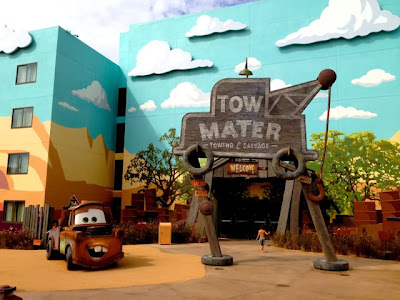 At the far end is The Wheel Well Motel, where Sally and Lightning McQueen can be found. This is where we stayed! 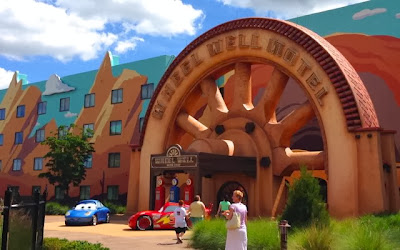 The theme extends inside as Red welcomes us. 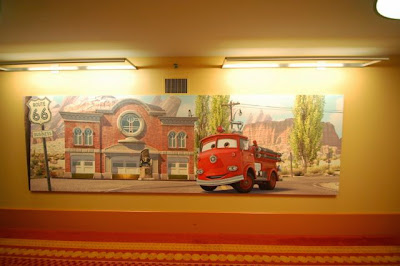 On to the room. The family suites can easily sleep 6. There is a dining /sleeping area (yes, you read that right, more on that in a bit), small kitchen area, 2 bathrooms, a living room, and a bedroom. 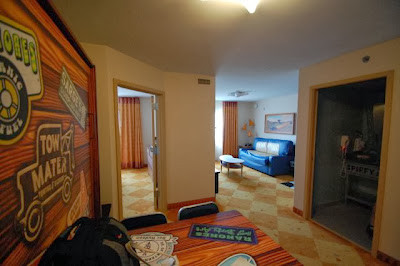 The bathroom to the right is a full bath with a tub. 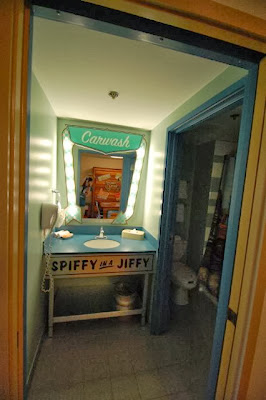 The bedroom has a queen size bed. The mattress was a bit on the firm side for me. 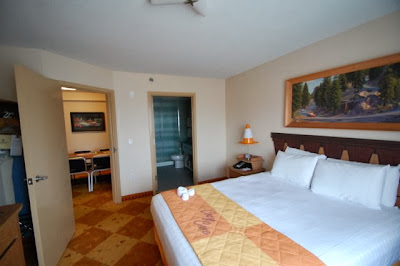 It has a flat screen TV. 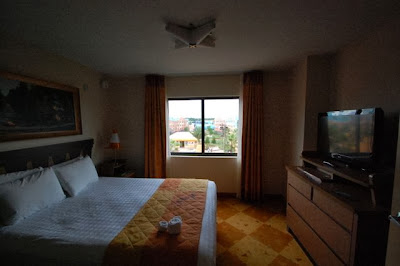 The bath off the bedroom has a shower and no tub. Water pressure was great, and this was easily my favorite shower of all the resorts we’ve stayed in at Walt Disney World. 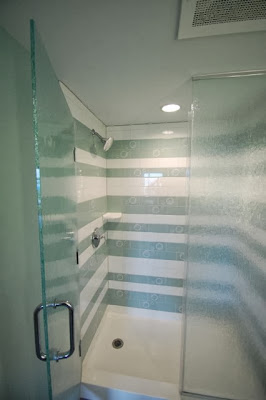 The cars theme is everywhere in the suites, with cone lamps, a fold out sofa bed that looks like a car seat, a table with a map of Radiator Springs, etc. 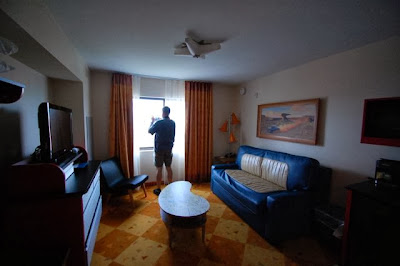 The kitchenette has a small refrigerator, sink, coffee maker, and microwave. 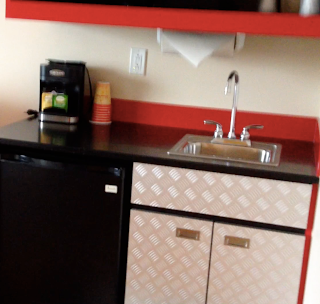 Our view was terrific as well, but of course, this is not a guarantee. One evening my wife made the mistake of asking how one family enjoyed the rooms and view, and the father replied in a rather churlish manor “The room’s great, but we’ve got a fantastic view of the parking lot.” Oops. 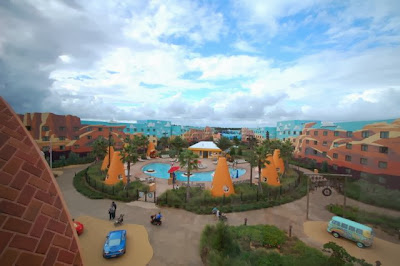 We were on the 3rd floor, and one evening we were able to see the higher fireworks from Wishes at the Magic Kingdom (left) and Illuminations at Epcot (right) at the same time! 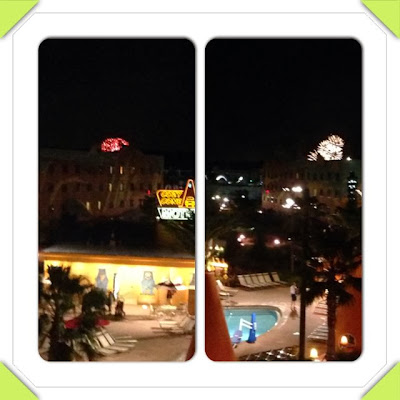 I mentioned the dining/sleeping area earlier. Here we see a table. There are usually 4 chairs around it, we are in the process of moving them here. 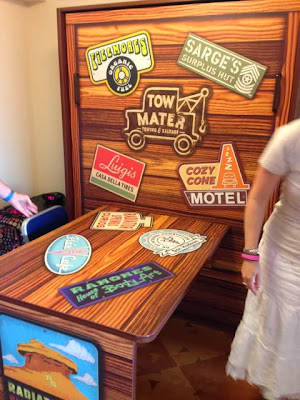 Why are we moving the chairs? To pull the murphy bed down of course! We actually found this bed more comfortable than the the one in the bedroom, and slept here a couple of nights! 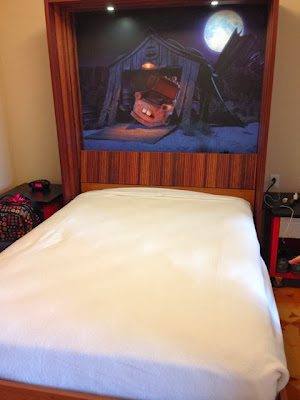 Overall, the room was fantastic. The one and only complaint I have is that you cannot lower the temperature below 68 degrees. And, you could possibly get a view of the parking lot.

The pool is themed after the Cozy Cone. 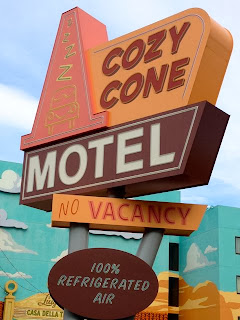 The cones, are cabanas, which is first come, first serve. Also, bring towels. We were not aware you needed to do this, and I had to run back to the room on our first swim. 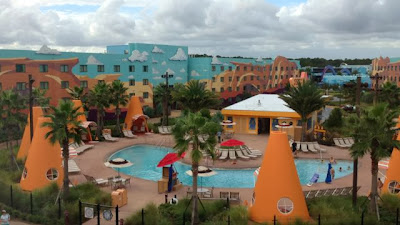 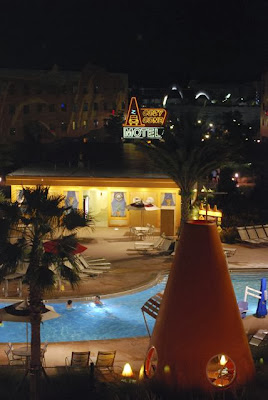 Speaking of night, the place is really magical in the evening. 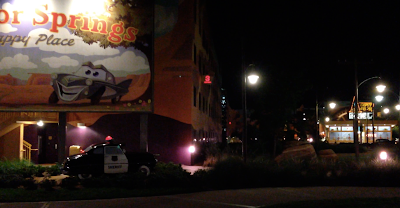 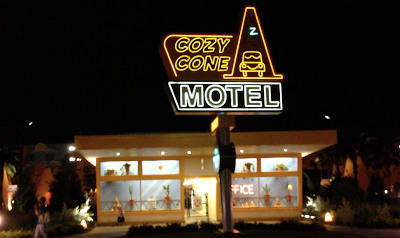 This is easily the best themed resort on Disney Property.
Don’t forget to get your pictures taken with some of the citizens of Radiator Springs! 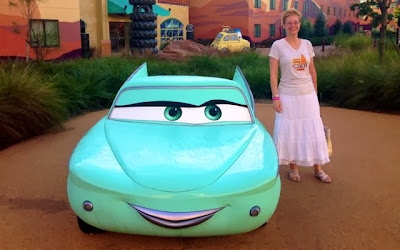 Barbie with Flo, owner of one of our favorite eateries at Disney California Adventure. 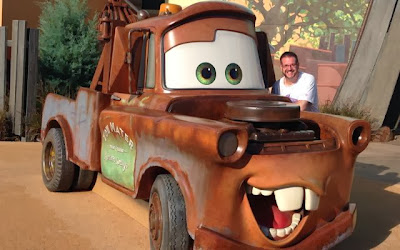 Me and Mater.
To read more great blog posts from Disney Musings visit them at http://disneymusings.blogspot.com/ and be SURE to like their facebook page at https://www.facebook.com/disneymusings