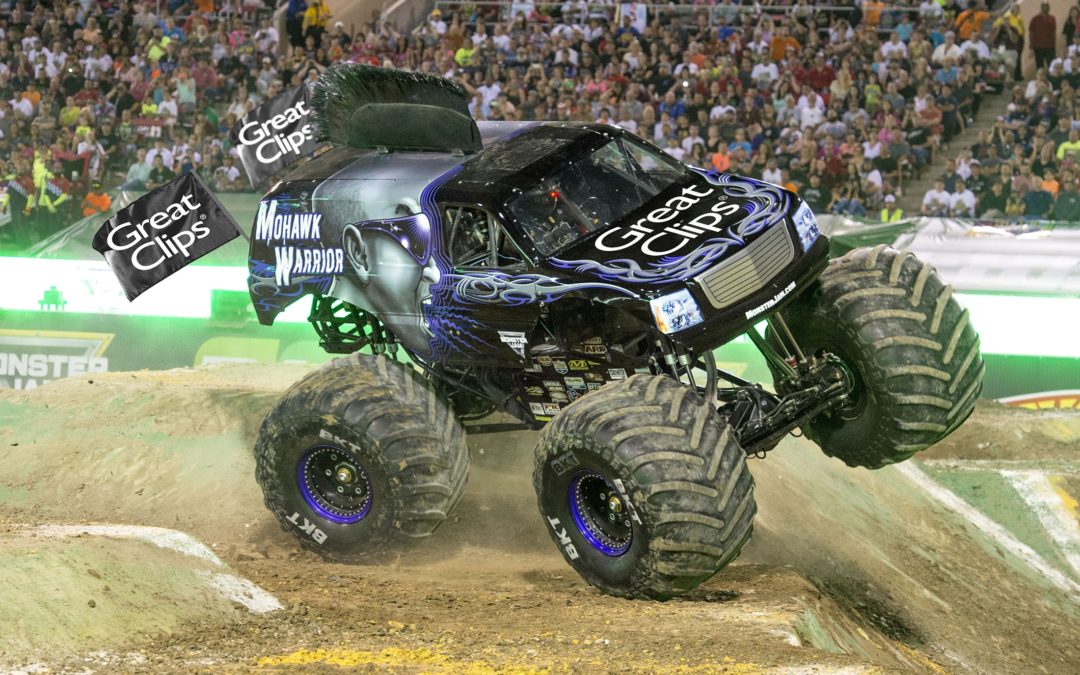 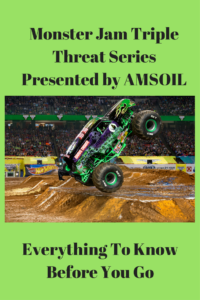 If your family loved Disney-Pixar’s “Cars” movies, and you are looking for a way to embrace your inner roadster (or if you just really love a good competition) than you are in luck!  We have a family-friendly event that is competing all around the world, and most likely in a city near you! But before I go into this event and how we ended up finding out about it, let’s go over some of my background.

I grew up in a family of girls. It was just my two sisters and I. Even the majority of our pets were female. So now that I am a mom of one girl, two boys (and a third on the way), I am learning about all kinds of things that are completely foreign to me and my natural instincts. One of the many new things being a “boy mom” has introduced me to is the world of monster trucks.  One of the most widely known monster trucks touring events is the popular competition put on by Feld Entertainment, ““Monster Jam Triple Threat Series presented by AMSOIL”. Before Monster Jam, my experience with monster trucks included some vague knowledge of them jumping and driving over cars while smashing them to bits and being really loud. I had also received a crash course from watching Disney-Pixar’s “Mater’s Tall Tales” and watching the antics of Mater as the “Tormentor” and Lightening McQueen as “Frightening McMean”. But I knew my kids would enjoy it, and so I was really happy to be able to see this performance, particularly since the event began the day after my son’s 4th birthday. 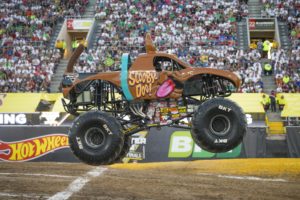 “Monster Jam Triple Threat Series presented by AMSOIL” was an incredible experience. Not only did they have monster trucks, but the drivers also competed in Monster Jam ATV’s and Monster Jam speedsters. There are six events in this competition (with an intermission halfway in between), and the event lasts just over two hours.

One of the nice things about attending “Monster Jam Triple Threat Series presented by AMSOIL” is the fact that it is a very interactive show. The announcer for the event took time in between to interview young guests (as well as give them free souvenirs) for their commentary on how the competition was proceeding and what they enjoyed about the athletes and vehicles.

And you’ll be wanting to make sure you bring your smartphones with you because you get to have a say in how well the athletes score too! Audience members can go to www.judgeszone.com and enter a code (in our case, it was ALB) and vote on what score they think each athlete deserved. You only have 30 seconds to login and cast your vote after each athlete competes, but if you thought someone did really well (or you have a particular favorite competitor who you want to try and score a higher score for), you can help them out.

Taking selfies? Good news! If you have any selfies or other images you want to share from the event, make sure to use the hashtag, #MonsterJam to share all of your great memories! 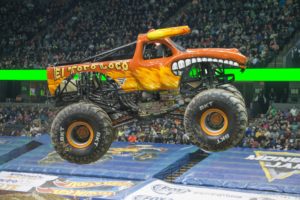 You will definitely want to get to Monster Jam early because there are video interviews with each of the athletes competing in that show’s events. Video boards are also hung around the room to display the results for each events, show some highlights, and let you know where each competitor stands for that particular event.

Once the event actually began, there was a very touching tribute made to the military (both active and veterans), as well as first responders before the national anthem was sung.

Then it was time to get down to business. The evening began with the Monster Truck Racing, in which you felt like you were watching a race out of Disney-Pixar’s Cars. Two vehicles at a time would race each other around the coliseum before a winner was declared and they moved onto the next round until finally a winner was chosen.

The second round was all about Wheelies, where the athletes were judged based on the vertical angle, distance, creativity, balance, and driver control. This was my daughter’s favorite part of the competition… she loved all of the jumps and wheelies performed by the competitors. For our event, El Toro Loco went first and was pretty beaten up by the time his performance ended. A couple other vehicles had issues throughout the night (Grave Digger had technical difficulties and couldn’t refire the engine), but again, this is where having a strong fan base can help you… while Grave Digger definitely didn’t win that particular event, he did get a strong score from the audience, which helped him out overall. So again, if you love a particular athlete or their vehicle, make sure to vote at www.judgeszone.com.

The third round gave you a break from the monster trucks as the athletes moved onto racing each other on ATV’s. My 4 year old really enjoyed this part (it was his favorite) and it was impressive to watch how quickly they were able to race around the coliseum.

At this point in the competition, we were given an intermission for anyone who needed a bathroom break or wanted to hit one of the concession stands. While I didn’t time how long the intermission lasted, both my husband and I felt like you had a decent amount of time to take a break before the competition resumed.

The second half of the show involved much more mudslinging as the monster trucks began spinning donuts. Scooby Doo flung mud within a few feet of us, and Mohawk Warrior actually hit our shoes with it. Half of the monster trucks did donuts on one side of the coliseum, while the others performed on the opposite side, which was nice. You really couldn’t have a bad seat in the coliseum.

The mudslinging continued with the Speedster Obstacle Course which was the fifth event of the night, but my kids really enjoyed it and the event was definitely impressive to watch. It’s amazing how fast those vehicles can go! 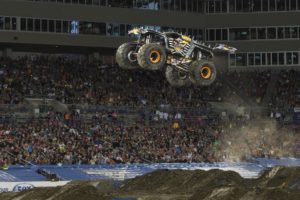 The final event (and most anticipated by the audience) was the freestyle event. This is where you see the stereotypical smashing of cars and showing off all of their best moves. While up until this event, each event had a unique winner, in the end Max-D driven by Jared Eichelberger ended up clenching his second win for the evening and won the event overall. 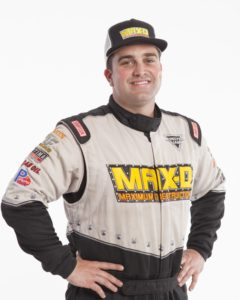 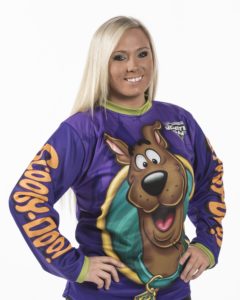 While all of the young and talented athletes were amazing, my daughter was really excited that there are two female athletes in this event- Myranda Cozad, who drives Scooby Doo (and whom my daughter waved to constantly) and Cynthia Gauthier, who drives Monster Mutt (MM) Dalmatian. It’s definitely worth getting to the venue early because all of the athletes had really unique stories to share before the event started, and were very inspiring. Disney Diva Tip: If you want to meet the athletes for pictures or autographs, make sure you go to one of the pit parties. While I’m not sure if they do it at all of their events or not, if your event doesn’t have a pit party beforehand, you still might get to meet them! After our event, the drivers gathered between sections F & G to greet fans and sign autographs.

Not Just For Boys 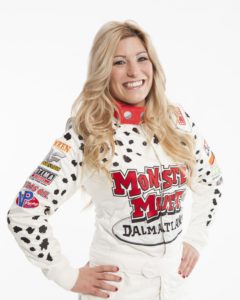 While my boys definitely enjoyed the show (and I figured they would), I wasn’t sure what my daughter would think. However, she was probably more enthusiastic than even her brothers. She loved all of the wheelies and jumps the athletes performed in the competition. And we weren’t the only girls in the audience- while not the majority, there was quite a sea of pink when you looked around the arena, and we saw lots of excited girls in the audience and walking around the coliseum. If you are concerned that a Monster Jam event might not be for you, I would definitely recommend you give it a try. All of my children (ages 2, 4, and almost 6) agreed that they wanted to go back and watch it again the next time it came into town. 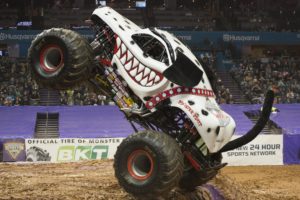 For our event, we paid $10 for parking, but didn’t have any problems getting in or out of the parking lot. You also seemed to have a good view of the athletes no matter where you were sitting, and we found our folding chairs very comfortable. There were also some benches on the sides of the venue, so if you want to make sure you get a folding chair seat, make sure you buy your tickets sooner than later! Disney Diva Tip: Feld Entertainment graciously gave us front row tickets to the event… which were incredible. However, there were multiple events where we were sprayed with mud (which again, was probably one of the highlights of the experience for my kids.. my daughter wanted to bring some home). You could also feel the vibrations of the vehicles and even with ear protection, it was very loud, so be prepared for that. 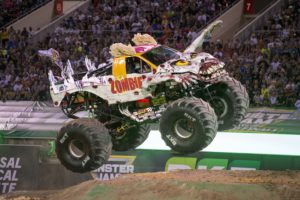 It seems like you can’t go anywhere without getting souvenirs, or snacks. While you can buy food from the concession stands for as cheap as $2-3 (think a pickle, a candy bar or a bag of chips), you will certainly find things on the more expensive side  as well. If you are looking for an idea on how much to budget, earmuffs range from $20-25 ( though they are cute in the sense that they look like Monster Truck tires), shirts range between $20-30, a stuffed animal monster truck will cost you $20, and snow cones in a souvenir cup will cost you $15. (They also had cotton candy with a monster truck holder, but I never found out the price of those.)

Getting Tickets & Finding an Event Near You

So how do you get to see it? Well, for those of you lucky readers in the Albuquerque, New Mexico area, “Monster Jam Triple Threat Series presented by AMSOIL” will be performing at the Tingley Coliseum in Albuquerque, Saturday, February 18, 2017 at 2:00pm Saturday, February 18, 2017 at 7:30pm and Sunday, February 19, 017 at 2:00pm. Disney Diva Tip: Looking to save even more money (and really, who doesn’t)? You can get a $5 off coupon at Bobby J’s Yamaha in Albuquerque. Tickets are available at ticketmaster.com, by phone at 1-800-745-3000, or the Tingley Coliseum Box Office. Disney Diva Tip: Want to get an even closer look at these great vehicles and meet the drivers? Check out The Pit Party! The Pit Party on February 18 and February 19 from 11:30am-1:00pm gives fans the opportunity to meet the Monster Jam athletes and get up close to the Monster Jam trucks. 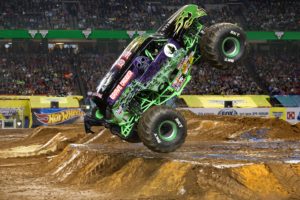 Not in New Mexico? That’s okay! Monster Jam is making its way around the world and is definitely an event not to be missed! For more information on a Monster Jam near you, please log onto www.MonsterJam.com or follow them via their social channels below:

Disney Diva Disclaimer: Feld Entertainment provided five tickets for my family and I to attend “Monster Jam Triple Threat Series presented by AMSOIL” in exchange for my honest review. While we did receive these tickets for free, the thoughts and opinions expressed in this article are entirely my own, and are not influenced or biased in any manner.  All images used in this article are property of Feld Entertainment, and are only used for promotional purposes. Pictures have been used with permission.