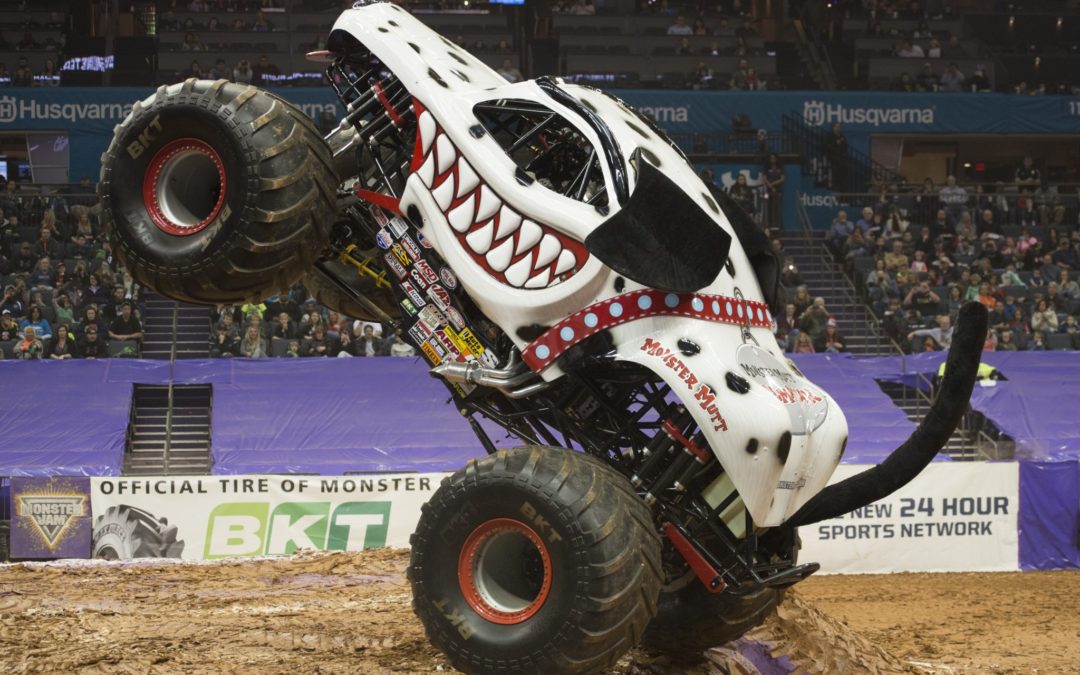 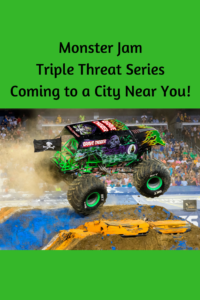 As great as it is to experience a Disney vacation once in a while, we know that for the majority of our readers, it is an opportunity that may only present itself once or twice a year if you are lucky. So what can you do to entertain your family in the meantime? Fortunately for us, Feld Entertainment has been specializing in quality family entertainment for over three generations, and has produced quality shows like Disney on Ice and Disney Live! While we have recently reviewed productions like Disney on Ice Presents Follow Your Heart and Disney Live! presents Mickey and Minnie’s Doorway to Magic, last evening, I  took a break from the Disney scene to focus on some of my children’s other interests… namely, Feld Entertainment’s Monster Jam event in Albuquerque, New Mexico, which is playing at the Tingley Coliseum through February 18th.

For those of you who have never been to a monster truck show before, the Monster Jam Triple Threat Series West   has six rounds: Racing, The two wheel skill challenge, riding on ATVs, the donut competition, the speedster obstacle course, and the freestyle round before an overall winner is chosen. This particular show is also very interactive… Each driver or athlete competes to gain points for their final overall score… but the audience’s opinions are calculated into that score! So how do you help rank a particular athlete? Make sure to bring your smartphone and head over to www.judgeszone.com From there, you can enter a particular code that will let you vote after each performance. You can also see the judging criteria displayed on the screens above if you want to know what the judges are looking for to determine a winner. Disney Diva Tip: Make sure you have your phone close at hand for voting… it only lasts a few seconds after each performance, so you want to make sure you get a chance to voice your opinion!

The first half of the show covered the racing, the two wheels skill challenge, and the atvs. In the first round, two vehicles would race each other around the arena, continuing on until there was a winner (in this case, Pirate’s Curse driven by Camden Murphy). 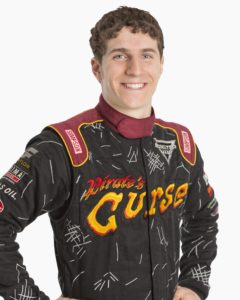 The two wheels skill challenge was also interesting to watch, with the female athletes, Krysten Anderson and Cynthia Gauthier (driving Grave Digger and Monster Mutt Dalmatian, respectively) giving impressive performances, but once again, Camden Murphy’s run with Pirate’s Curse pulled out in the lead and he was able to win the second round as well.

For the third round, the competitors took a break from driving their monster trucks and switched to riding atvs. For this event, four athletes raced at a time, with Zombie dominating in the first set and Earthshaker winning the second heat. For the third round, all eight drivers competed in an elimination round until the last two athletes (who happened to be Zombie and Earthshaker again) raced against each other for two laps before Tristan England representing Earthshaker won.

This brought us to intermission. This is a great time to stretch your legs, use the facility, or pick up a favorite souvenir or snack. While I did see snowcones, cotton candy, and occasional Monster Jam merchandise making away the arena, some of the coolest looking souvenirs was at the concession stands. The Lighted Reaper Steins that came filled with a snow cone were my favorites and were $20 a piece. They also had Grave Digger Reaper Masks with cotton candy for $20. If you wanted to save a little money, you could get a Monster Jam Tire Cup with a snow cone or a Monster Truck Hat with Cotton Candy for $15 each. And for those of you who are in the Albuquerque area, make sure you bring $10 to cover parking because they only accept cash! 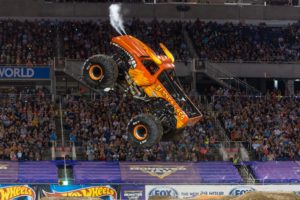 After intermission, it was time for the donut competition. While each athlete competed well, in the end, it was El Toro Loco who won this round. 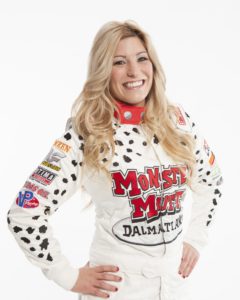 Next it was time for the speedster obstacle course where two cars would race each other around the arena, again, moving into the semi-finals and finals. This reminded me a lot of the scene in Cars 3 where Lightening McQueen and Cruz Ramirez end up racing with Miss Fritter and the Rambulance among other vehicles… but it was Cynthia Gautier in the Monster Mutt Dalmatian that was to be the all star of this event and would have even caught the attention of Cruella de Vil. Ms. Gautier put on a strong performance during the first two rounds, but seemed like she was going to lose to Pirate’s Curse in the final race. However, right at the last minute, Monster Mutt Dalmatian was able to overcome Pirate’s Curse, and Ms. Gautier, was able to clench a win, much to the delight of the female fans in the crowd. 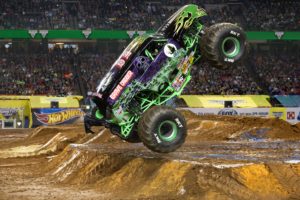 The final component was the freestyle competition, which was of course, the crowd’s favorite. During this segment, the athletes have 75 seconds to show off all of their best moves and favorite stunts. Grave Digger ended up winning this round, and while Krysten Anderson did extremely well (including an amazing save towards the end), there were many El Toro Loco and Pirate’s Curse fans who seemed to disagree with the outcome. This goes back to my advice that if you think an athlete did exceptionally well, make sure to vote for them! In the end, the audience plays a huge role in determining the overall winner, so you want to make sure to vote for whomever you think deserved it the most.

Overall, we really liked this event. Yes, it was a break from showing off our Disney side, but the vehicles were all extremely creatively designed (where else are you going to find a monster truck that looks like a dog, complete with floppy ears, tail, and tongue, a shark, or a zombie waving its arms), and my kiddos really enjoyed watching the show. My three year old son was particularly enthralled with the monster trucks and my five year old son was very happy that one of his personal favorites (Pirate’s Curse) was the overall winner for the evening. My daughter’s favorite part of the show was where all of the drivers come out at the end and wave to the crowd. It was really fun to see them up close and personal. Disney Diva Tip: For those of you in the Albuquerque area on February 17th, you can get tickets for the Pit Party where you can take photos with the drivers and their vehicles, collect autographs, and ask them all kinds of questions before the show. What if you don’t live in Albuquerque? Not a problem! You can find out their full schedule by clicking here.

Another great thing about attending a Monster Jam event is that you never know what the outcome will be… each event is entirely unique. And it is a great family experience… you definitely do not want to miss it. So how do you buy tickets? Simply click here to purchase tickets for a location near you. One more final tip… I do recommend wearing some kind of ear protection because it gets VERY LOUD. But luckily, most people planned ahead, and even if you forget, you can find plenty of headphones available for purchase.

Disney Diva Disclaimer: Feld Entertainment provided five tickets for my family and I to attend “Monster Jam Triple Threat Series West” in exchange for my honest review. While we did receive these tickets for free, the thoughts and opinions expressed in this article are entirely my own, and are not influenced or biased in any manner.  All images used in this article are property of Feld Entertainment, and are only used for promotional purposes. Pictures have been used with permission.