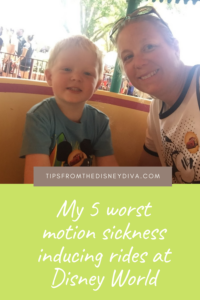 Suffering from motion sickness can be tricky if you want to enjoy a place that has rides and attractions.  Many rides have motion sickness warnings, but how do you know which ones are really bad and which ones are fine?  Everyone’s motion sickness is different.  I can handle most rides that actually move.  Roller coasters are normally no problem.  Anything with a simulator ride and I’m out.

Before I get into my top 5, I want to give a couple of honorable mentions.  In Animal Kingdom Kilimanjaro Safaris and Expedition Everest are two that I need to be careful with.  I’m usually fine on them.  However, I can’t ride them back to back.  I need some time to let my stomach settle before going again.  Kilimanjaro Safari all depends on how the trip is.  Sometimes it’s nice and smooth.  Other times it’s very rocky. 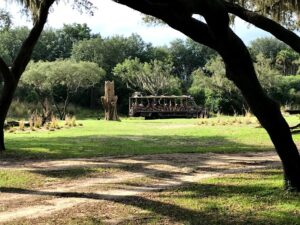 The vehicle for Kilimanjaro Safaris.

Number 5 Prince Charming Regal Carousel  Prince Charming Regal Carousel is at the bottom of the list because I will ride this one.  It is located in the middle of Magic Kingdom.  Now that my kids are both over 7, I can happily sit out and let them go together.  This round and round motion gets me every time.  As long as I focus on something in front of me, I’m okay.  I can’t watch this one either.  There is something about watching something go in circles that makes me sick. 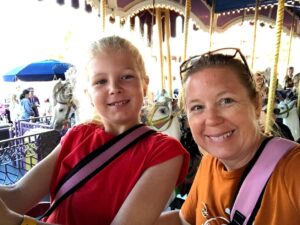 My daughter and I on the carousel.

Number 4 Mad Tea Party (Teacups)  Speaking of going in circles, next up is Mad Tea Party.  Mad Tea Party is positioned between Tomorrowland and Storybook Circus in Magic Kingdom.  Spinning in circles while going in a bigger circle does me in.  If my family promises not to spin it, I will ride it with them.  I stare at my shoes the whole time, but I will ride it.  The rest of my family likes to spin super fast, so I usually take the time to find some shade or use the bathroom. 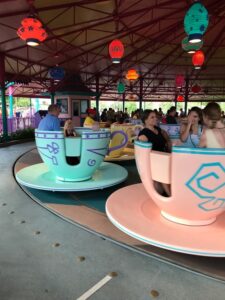 Number 2 Mission Space Mission Space is in Future World in Epcot.  I rode this ride exactly once.  It was back in college, around 2003 when they only had one mission-the mission to mars.  In 2006 the ride was updated splitting the ride into two categories, orange, and green.  The orange track is the original mission to mars.  The green is the tamer, less motion-sensing one orbiting Earth.  It was such a bad experience the first time I rode it I still won’t try the green side.  I very seriously considered using the brown bags that were available for guests during the ride.  I did really enjoy the concept of the ride and being able to see the Earth from space. 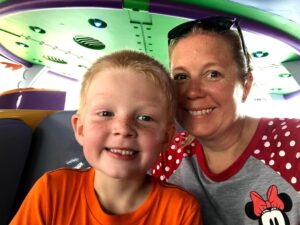 Number 1  Star Tours  Star Tours The Adventure Continues is located in Hollywood Studios.  The ride has had several upgrades throughout the years.  I can’t remember the last time I rode this ride.  I know it was when I was a kid/teenager.  It is a simulator ride, which I know I don’t do well on.  The only thing I remember from this ride is C-3PO standing in the corner and thinking to myself “it’s almost over” over and over again.  I’m not a big Star Wars fan, so I don’t mind missing out on this one.

These are my top 5 motion sickness-inducing rides.  Do you have any of the same reactions?  What other rides would be on your list?