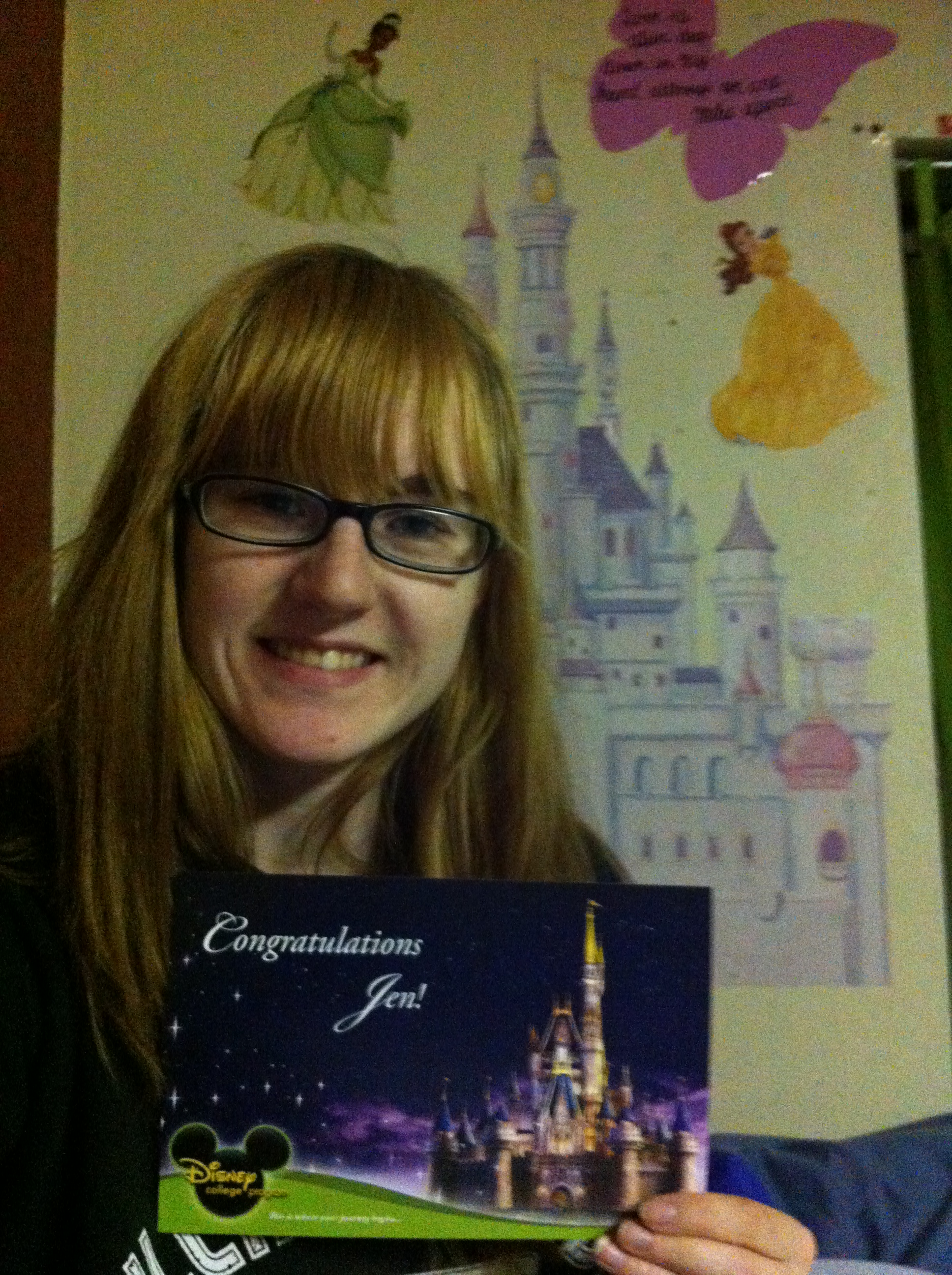 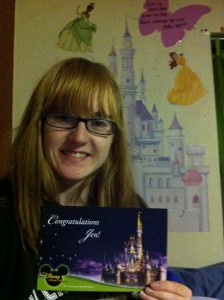 I tried three times to get into the Disney College Program. The first time I was pending for 4 months, the second time I was denied right away, and the third time I was accepted right way. It will be hard to forget the afternoon I got my acceptance. I was picking my classes for my senior year of college and I thought “how ironic would it be if I got my acceptance now?” Well, I found out how ironic it was, because about 15 minutes later I got my acceptance email. I started screaming and jumping around and my neighbor came and check on me because she thought something was horribly wrong. The mix of emotions that ran through my head is hard to describe. Of course I was excited because I had finally gotten my dream internship. But I was also a little heart broken, I had gotten picked for attractions, which was my last choice and I also wouldn’t not be able to audition for the musical at my school. I had a couple of minutes where I almost thought about declining, but I knew that my program would be what I made of it, and that I could make it more than worth my while.

A lot of things happened very fast. First off, there are several steps to the acceptance, and they only give you a short time to do them before your spot is taken by someone else. That, on top of being across the country from my parents made it difficult to keep everything going smoothly. I was also supposed to be going on a trip to Las Vegas with a couple friends to celebrate all our birthdays, but instead my mom ended up flying out to help me pack. Normally I would not need help packing, but we decide that since I would only have one semester left when I came back, we would act like I wasn’t coming back and take more home with me than normal. Rather than take my two big suitcases home with me like I normally do for summer, my mom and I combined took 7 suitcases home. I went through everything I had at school and donated a lot and threw quite a bit away. 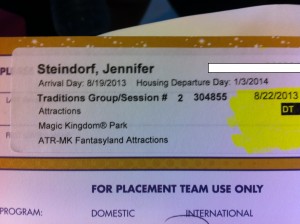 Summer was a whirlwind and before I knew it I was packing up to go to Walt Disney World. Arriving was scary and exciting all at the same time. I still didn’t know where I would be working and I was hopping to work somewhere that I would be able to act a little. Check in day I had to push my two big suitcases (with one of them broken) about half mile from my hotel. By the time I got to the check in point I was drenched and no longer looked cute like I had hoped to. Nonetheless I still had to get my ID pictures taken and I found out that I would be working in Fantasyland at the Magic Kingdom. So much for my high spiel ride. Moving into my apartment was easy because I was moving in with people who were already there.

My Traditions day, park orientation and work orientation flew by and that’s where I learned that I would be working at the Philharmagic complex. I was a little disheartened but I reminded myself that this program would be what I made of it and nothing else. I began to make friends and get really comfortable in my area, and I highly anticipated the opening of Princess Fairytale Hall, which I would be working at. I knew that would give me an insight into the entertainment world and how Meet and Greets work, and I was right.

I was given the opportunity to see so many amazing things while I was at Walt Disney World. First I was beyond thrilled that I would get to be there for the holidays, since I hadn’t even been to Disneyland for any holidays (and I live fairly close). Second, I was able to go to several audition while I was there, which really helped me gain confidence in why I was there and more belief in my dreams. Third, I took two classes that were absolutely amazing. My Entertainment Production class was taught by the Technical Director of Walt Disney World and by one of the Producers. They offered a fabulous insight into the company and shared many hilarious and encouraging storied. My Disney Heritage class gave a personal look into the life of Walt and Roy Disney and how their dreams became a reality and what that reality meant to the rest of the world. While at times I wished I had only taken one class or maybe none, I know I would have regretted no taking one of those classes in the end. Fourth, I was able to network while I was there. I had a meeting with the stage manager of Hollywood Studios where she told me that I had a lot of great potential and she knew I would have a great career at Disney. 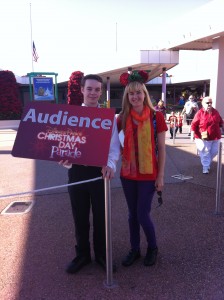 My program continued and Princess Fairytale Hall opened. I realized the friends I made were quickly becoming best friends and people who I knew I could rely on in any situation. We completely switched over to a new way of helping our guests with disabilities and the crowds continued to grow. I was able to achieve my goal of becoming a Galactic Hero on the Buzz Lightyear Space Ranger Spin and quickly did that 6 more times. I got to go on a behind the scenes tour of the Cinderella Dream Suite and backstage of Fantasmic and both are days I will never forget. I got to be in the crowd for the taping of the Disney Parks Christmas Day Parade and I became a Sorcerer of the Magic Kingdom. There was that one time on Christmas when a guest made me cry and my Coordinator didn’t hesitate to tell them that I was one of the best Cast Members in the area and that I was doing my job exactly how I was supposed to, no matter how they liked it or not. 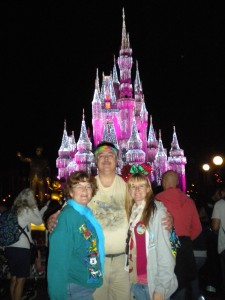 My family got to visit me, and that was a huge highlight of my program. They enjoyed it so much, but I had to remember to slow down and not be so hyper. Mom and I went to a Christmas Party while dad ended up getting sick. My parents were able to see just how truly happy I was and how I was so much in my element. We attempted to drink around the world, but we failed. We got to see the Hoop Dee Doo Musical Revue which ended up being something I loved. We ate lots of really good food, and at the end of the trip dad was shocked at how much money they didn’t actually spend.

Near the end of my program a few big things changed in my life and I decided to take a big step and become a seasonal cast member. If you know what this is, I’m sure you are thinking that it’s not a very big step. Becoming seasonal means I have to work 150 hours in a year, which could easily be achieved in a month during the holiday season. But really this meant that I was committing to moving to Florida by the end of 2014. Going seasonal was my way of staying a part of the company I had always loved, and it meant I would at least have a little income when I moved. 2014 is going to be a crazy year for me between graduating college and moving across country from California to Florida.

I’m still in awe of the chance I was given and I would push anyone to consider the Disney College Program. I made friends that will last a lifetime and hopefully found a job to last a lifetime. No matter what you want to do in life, the Disney College Program gives you amazing skills that will look good on any resume. It’s not easy, and I will stress that more than I can possibly make you understand. You have to know that you are going there to work, and if you don’t you will either be fired or at the very least end up working with a group of people who hate you because of your work ethic. There is a very strong chance you could get stuck moving strollers for 14 hours and you will have guests who yell at you for just about anything. You could get peed on, vomited on and you might get injured, but if you keep your head on your shoulders, you will learn that if you work hard, people will respect you. At the end of my program I got a review of my performance, and I got the highest rating possible in every category. I am beyond proud of my review because I know I earned that. I did get peed on, stepped on, yelled at until I cried, I worked plenty of overtime, and I could solve just about any problem you threw at me. It was hard to leave, but I knew I would be back. Mainly I was going to miss the friends I made. I knew I fit in with these people more than I did anywhere else. These were the people that I would meet up with to go on a mid-life crisis cruise or call to tell I got engaged or was pregnant. But I know I wasn’t leaving them behind because they would always be there for me.

My Disney College Program was one of the best things to ever happen to me. Not only was I living out my dream, but it helped me develop my new dream. I’m so beyond excited to opened the doors that have been laid out for me and to see where they lead. Disney is such an amazing company and I can’t wait to really start my career with them. I hope other people get that chance to experience Disney the way I did, because even if you don’t go back, you will forever remember your time as a cast member.