My Experience with a runDisney Virtual Series 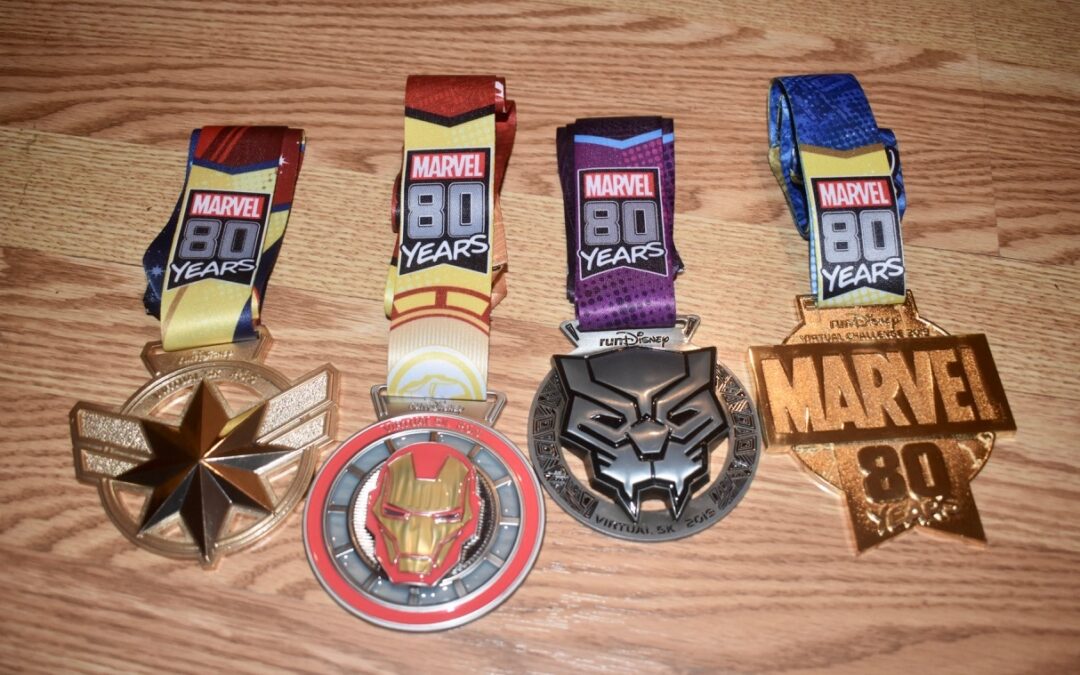 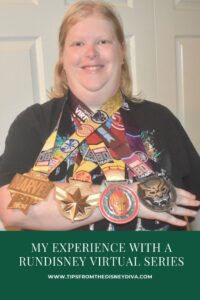 A few months ago, I shared an article about why I chose a Virtual runDisney event. I also shared my tips for beginners who wanted to train for a runDisney event. Now that I have completed my runDisney Virtual Series celebrating 80 years of Marvel, I wanted to come back and share my experiences and thoughts about it.

The theme for this race was Captain Marvel . If you didn’t read my review of that movie, then let me tell you, I am a huge fan of Captain Marvel. My husband and I both signed up for the series so we could motivate each other and run the races together. Our work schedules don’t allow a lot of time for us to run together without our kids, so we decided to take extended lunch breaks and meet to run. For this race, I had been doing a decent job of training. On the day we had chosen to do our race, the temperature and humidity levels were high so we opted to run at our local gym. I downloaded runDisney’s playlist on Spotify for inspiration. Although my husband is a faster runner than I am, it was still a fun lunch date. It wasn’t a personal record for me by any means, but it was my fastest race of the series and I felt a great sense of accomplishment after crossing the virtual finish line. 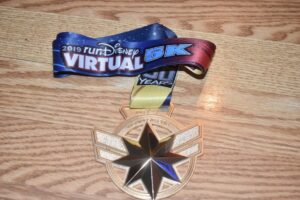 The theme for this race was Iron Man which was exciting because he’s one of my favorite Avengers. In the time between the June 5K and the July 5K, life got in the way big time. My father had some major health issues and I had been spending a lot of time with him. This meant I had been too busy or too tired to do much in the way of training for this event. It got to be the last week of July and my husband and I realized we were running out of time to run this race. We planned another lunch date for July 31 to complete this race at the gym since it was still hot and humid outside. Things definitely didn’t go as planned, however. The morning of the 31st, most of our part of town lost power for several hours. This meant that instead of working from home and then meeting me at the gym, my husband had to drive the 30 minutes in the opposite direction to go into work. Instead of running together as we’d planned, I ended up running my race at the gym where I have a membership and he had to run his in the gym at his office. It definitely wasn’t as easy as the first race, maybe because I didn’t have the motivation of my husband cheering me on, or maybe because I was already mentally and physically exhausted by all that had happened in July. In the end, I crossed the virtual finish and was proud to see I was within a minute of my June time. I definitely felt the effects of this race for several days after due to lack of training. 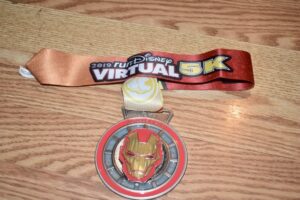 The theme for this race was Black Panther. I would like to say that life had calmed down between July and August and that I was able to get some training in, but unfortunately it didn’t. Thankfully, my husband and I were paying a little closer attention to the calendar and were able to schedule our running date before the last day of the month. I’m also happy to report that there were no power outages that day and we were successfully able to run in the same location at the same time. Once again, we chose the gym over running outside because it was still pretty hot. This race was definitely the hardest of the 3- my calves kept trying to cramp up on me during the 2nd half of my race, and there were times I wasn’t sure they were going to let me finish. It took several stretch breaks and a slower pace than I would have liked, but I finally crossed the virtual finish line for the 3rd and final time in this series. It was my slowest of the 3 races but I was just happy to finish it. 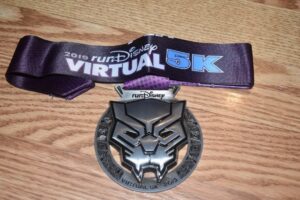 When I think back to my motivation for doing a virtual race series, some of my pros actually ended up being cons. I thought not having a pace requirement would be good, but I think it might have served as more motivation to train and prepare for race day. Additionally, although I enjoyed running in the air conditioning at my local gym, it seemed to me that the time and miles went by slower than they do when I’m running outside. I suppose this is due to the lack of changing scenery although I did try focusing on the TV at the gym to help distract myself. The nice thing about running at the gym, however, was that I was able to use the massage chair to relax my sore muscles after I completed my run. I also enjoyed being able to pick our own date and time to run, it made it much easier since we didn’t have to worry about what to do with our kids while we ran. In the end, I am happy that I chose to participate in this virtual run series and would consider doing it again in the future if Disney picks another theme I like. 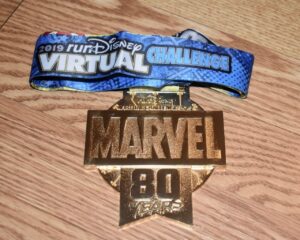 Now that you’ve run a virtual 5k, are you read to run a real 5k? Patricia at All 4 Dreams Travel can help you plan your first runDisney race vacation! Contact her today.