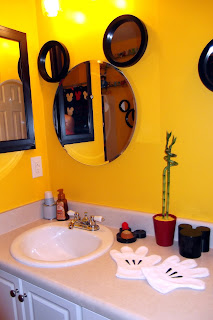 So, I decided that our new house needed a little extra Mickey. After all, you can never get too much of the mouse, right? My latest Mickey project was the second floor bath that my niece and I share. The bathroom is very spacious for a guest bath, but was painted the most hideous colors when we moved in. The tub and sink area were a sort of dark royal blue and the toilet area was a rather unfortunate brown. The colors were definitely not me!

To begin with, I had to remove all of the hardware and fill a ton of holes in the walls. We decided to change out the curved shower curtain rod for a straight one because the door had been slammed into it one time too many. The mirror was missing when we moved in and the light fixtures just weren’t the right style, so I took those down, too. And it was a good thing I did; there were no electrical boxed behind the lights and the holes were just knocked into the wall as though with a screwdriver. After installing boxes and a lot of patching, I was ready to paint. 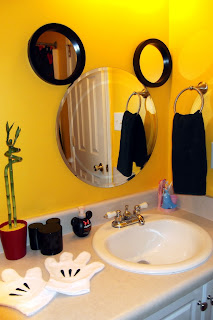 First, I painted on two coats of Kilz on the walls to block the old colors and hide any stains. Then I painted on a pale yellow. It took three coats to get good coverage. Next, I put in the new, fun, bubbly-glass lights. Which was when I realized that the wall color was way too green! Ack! Back to Lowes for more paint. This time, I picked a brighter yellow from Valspar called Chickadee. I got it home, put two coats on the wall, and discovered that it perfectly matched the shoes on my niece’s toy Mickey! Exactly what I was looking for!

Next, it was time for mirrors and not just any mirrors would do. I got two 22″ round Kolja mirrors from IKEA and two sets of 5 small, round, black-framed mirrors from Kirklands, one 11″, two 9″, and two 7″ (Home Depot has a similar set by Martha Stewart, but they were more expensive.) I hung one large mirror centered over one sink at a height that my niece could use and the other one over the second sink at a perfect height for me. Then I added two 9″ mirrors for the ears. Voila! Mickey head mirrors. We used the remaining 11″ and 7″ mirrors to make smaller Mickey heads on the other walls. My dad offered to make frames for the 22″ mirrors so that the look will be more Mickey. 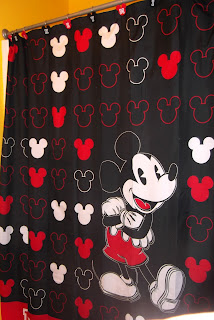 I changed out the faucets as well. The old faucets were the ugly, single lever kind that always seem to break. The new faucets, which were fairly inexpensive at Lowe’s, are classic and fit the design well. We really wanted the one’s that resemble Mickey hands, but couldn’t find any at a reasonable price. 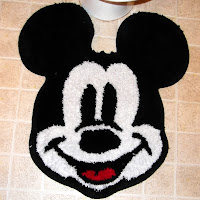 There are a ton of fantastic Mickey accessories available for the bath, and I just had to have a few of them. I even found a cotton ball holder and soap dispenser shaped like Mickey’s head! A second solid black Mickey head rug was purchased at Walmart. And while we were down at Disney World last October, we picked up two of the Mickey Glove bath mitts. My niece has a Minnie soap dispenser, also from Target, that came filled with lemonade scented foamy soap. She loves that it’s Minnie and I love that you can refill it with any foaming soap, although for us it’s got to be Bath & Body Works foaming soap. (I’m a total Bath & Body Works addict.) 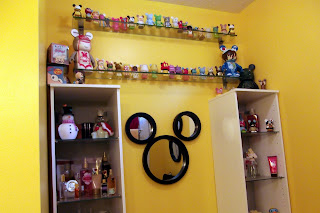 The bathroom had lots of storage space already, but the area around the toilet looked unfinished, so I added a couple of Fullen cupboards from IKEA. They are a great place to store extra toilet paper and soaps as well as offering a chance to display pretty bottles of perfume. I also added a medicine cabinet to the left of the sinks. I always think it’s a good idea to have one and when I found this one on clearance at Lowe’s, I couldn’t resist. I planned to add glass shelves over the toilet for some additional Mickey displays, but my sister thought we should put a framed Mickey poster there instead. I thought it would be fun to display some of our ever-growing collection of Vinylmation there, as they were taking over the top of the bookshelves in the living room. In the end, we compromised; we put glass shelves above the cupboards for the Vinylmation and bought a poster to replace the mirror above the toilet. We are also on the lookout for some ceramic Mickey glove shaped knobs to replace the silver ones on the sink cupboards and storage cupboards. 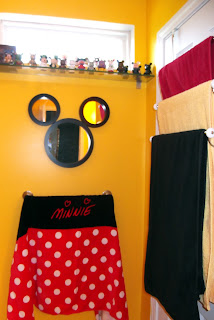 The glass Grundtal shelf under the window is also from IKEA. It’s the perfect place to keep plants as the window itself was too small. However, when the plants died, I decided to use it for additional Vinylmations instead. The towel bar on the linen closet door seemed like a good fit due to the white ceramic knobs on the ends, and there really wasn’t a good place to add a large towel bar, so, it works. I opted for solid black, yellow, and red towels for the main towels, although we have several Disney character towels as well. I especially like my niece’s Minnie Mouse hooded towel. It even has Minnie gloves on the top corners and mouse ears on the hood.

I’ve had a blast bringing a little more Mickey to this bathroom and really love how it turned out. It was a lot of hard work and took a ton of paint, but it was definitely worth the effort. I hope you like it as much as we do!