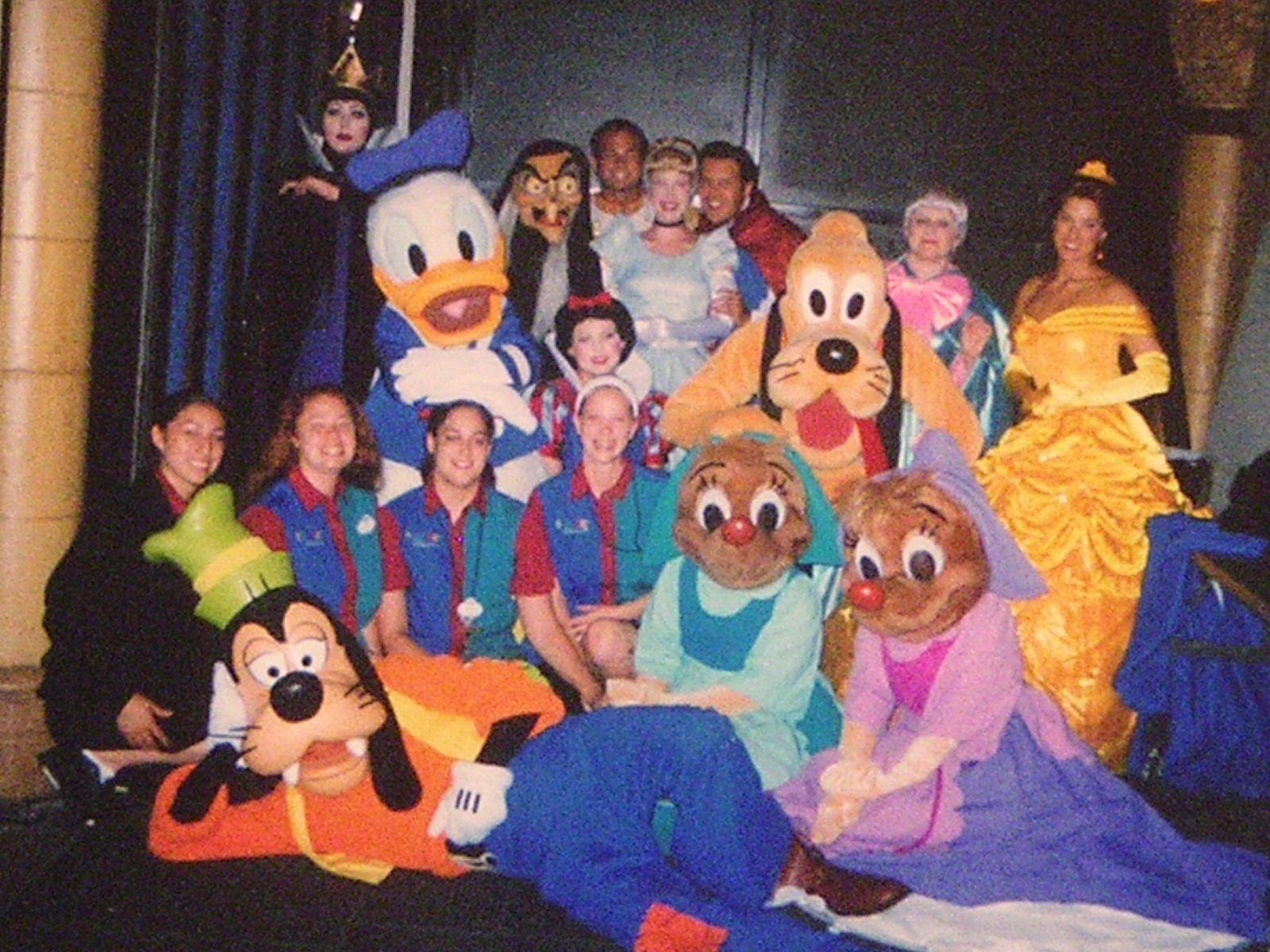 Have you ever thought about doing the Walt Disney World College Program or know someone who is? One of the first things I did when I was thinking about it, was look online for people who had done it before to see what kind of experience they had. I recently hit the 11th anniversary of starting and thought maybe it was finally time to share my experience. 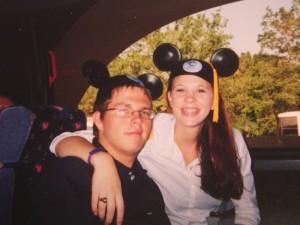 Dreamin’ Diva and “best friend” right after the WDWCP Graduation

This time eleven years ago, I had been a Walt Disney World cast member for a few months.  The months leading up to starting were exciting and nerve racking.  I had only been in college for 3 semesters and had just barely turned 20 before I headed down there.  The whole idea of working at Disney World started when I was very young, though. I have never really told many people this story, but it has stuck with me all these years.  I remember the exact moment I decided I wanted to work there. I was young, maybe about 11 or 12 years old, and we were in line for the ride in Epcot’s Norway area, Maelstrom.  I looked up to the beautiful blond woman at the ride entrance and noticed her nametag had her home town  and country on it.  I thought to myself, “I want to work here one day and I want a nametag proudly showing I am from Baldwin, NY”.  Since I have been asked countless times about my experience, I thought it would be fun to share how I made that dream a reality almost a decade later. 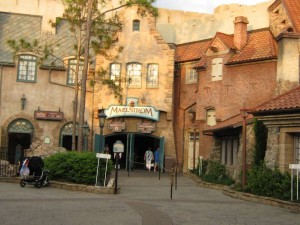 Fast-forward about 9 years as I am walking through my college campus during the fall semester.  I was stopped dead in my tracks by a paper stuck to a pole with a Mickey sticker announcing a WDW College Program presentation.  I had to go.  I was drawn like a mouse to cheese.  Without really telling anyone, I attended the presentation and lined up an interview.  I called my mom so excited about the interview and she did NOT share my excitement.  She worried I wouldn’t ever go back to school if I left.  She and my dad were eventually on board (and yes I did eventually go back to school and get my bachelor’s degree).

My interview went really well and I was getting even more excited. I really wanted this to happen. When I was hired, I was over the moon! I got my first choice in the costuming department in the Magic Kingdom.  My parents drove me down from New York to Florida and dropped me off.  The planner that I am, using the limited internet technology I had in 2002, I started looking for other people going down there too. I had met a girl in a College Program chat room and we had decided to be roommates.  We met up at registration and headed to our apartment to move in with our 6 other roommates. Eight girls under 21 years old from eight different states….. what could go wrong? With all of the drama of that situation aside, we really did have a great time together starting right away on the first night. The guys from the apartment downstairs helped carry up some bags and hung out for a while.  One of them taught me a “secret” handshake and told me I was his “best friend”. We all talked excitedly about the trainings we were each assigned to over the next few days. It was a great way to start the journey. 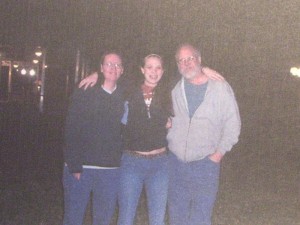 The night my parents dropped me off. I couldn’t have done this without their love and support.

The first week was a whirlwind of training and being introduced to life as a cast member. I went to the trainings with my new “best friend” from downstairs who was also going to be working at the Magic Kingdom and was introduced to my job.  No new hire training will ever compare to the new hire training at the Magic Kingdom.  Seriously.  Nothing is more fun on a first day than riding the rides then going behind the scenes to see how it works.  The one thing that was a bummer about starting though was getting my name tag. During the “100 Years of Magic” celebration from 2002, they decided to extend it into the first part of 2003.  The nametags for this had the cast member’s favorite character or attraction, not home town.  Oh well, I was just so excited to be there, I got over it quick. 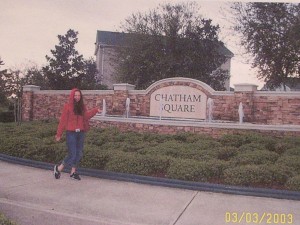 The stories and experiences from the semester I spent there were better than any semester I spent in school.  Of course, adjusting back to normal life after you have lived there can be slightly difficult, but it can be done.  Being able to add Walt Disney World to my resume has opened so many doors for me in interviews.  It’s a conversation piece I wouldn’t trade for anything.  Disney is renowned for their customer service so when a potential employer sees that, they want to know more.  I absolutely light up when asked about my experience.  It brings out a natural enthusiasm and positivity that can really stand out for a potential employer.  A year after I went back to college, I went to a job fair at a bank to apply.  What came next was incredible.  I interviewed with the HR representative and it went so well that she pulled in the CFO of the bank to interview me right away.  I was hired right there.  I can pin it to one thing… she focused so many of her questions on my experience with Disney.

Once you get me talking about my experience with the College Program (or anything Disney), it is hard to get me to stop.  I can talk about my numerous challenges and successes.  Like my first day working on parade prep.  I was handed a harness and instructed to put it on.  Deathly afraid of heights, I turned to my trainer and hesitantly asked “Where are you putting me?”  The response was one I dreaded, “Oh we are just going to get on a forklift and help the Fairy Godmother get into place on the float. You’ll be fine. The rope will stop you a few inches from the ground if you fall off.”  I was terrified, but I put that harness on, went up on the crowded forklift and did what I had to do. The confidence I gained from that just can’t be taught in a classroom.

I will never forget the first time my supervisor asked me to train a new hire… only two weeks after I had started.  I could do the job so well and so fast that they had to give me other stuff to do so I wasn’t standing around. The time flew by so fast and before I knew it, my time roaming the utilidor under the park would be over.  So many dreams had come true.  I was a cast member.  I had been inside, all around and up to the top of Cinderella Castle. I had stood on and been inside parade floats. I even got to put on Belle and Cinderella’s dresses (shhhhh don’t tell anyone).  And just before it was all over, I got a new nametag with my hometown on it! Mission complete! 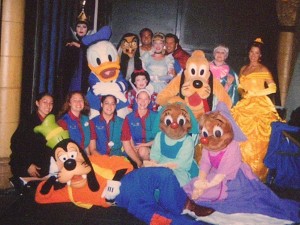 I came home so much more confident in myself.  I had learned to push myself and  had done things that were completely outside of my comfort zone.  I had become organized and methodical. I had become more of a leader. It was the first chance I had been given to supervise, even if it was just covering times where there wasn’t a supervisor available to be in the area.  They would put me in charge.  I had never thought of going for jobs like that before.  Ever since then, I have held supervisory or management roles almost everywhere I have worked.

*Diva Tip*- The experience is what you make of it! Make the most of the networking opportunities, get involved, have a positive attitude, and follow the rules. Be open to new experiences and you never know what can happen or who you will meet. Lastly, appreciate every second of it, good or bad, because it will be over before you know it. 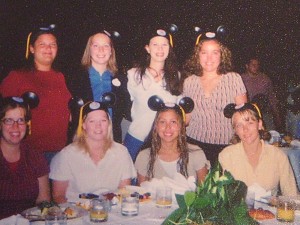 A special thanks to my roommates. Despite all of the drama with 8 women in one apartment, I wouldn’t trade that experience for anything!

The people I shared the experience with changed me too.  We shared something that people in the real world wouldn’t ever understand….We lived the magic for over 4 months.  I still keep in touch via Facebook from time to time with many of them.  I gained more than I ever bargained for full of excitement, adventures, and fairy tales. I miss it every day and have so many fond memories. It really helped me figure out who I wanted to be.  Oh, and 5 years (to the day) after that first night in the apartment with my roommates and the guys from downstairs, I married my “best friend” in the place we first met and started dating… Walt Disney World.

“And they lived happily ever after. The End.” 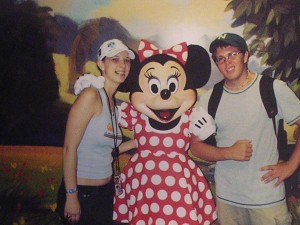